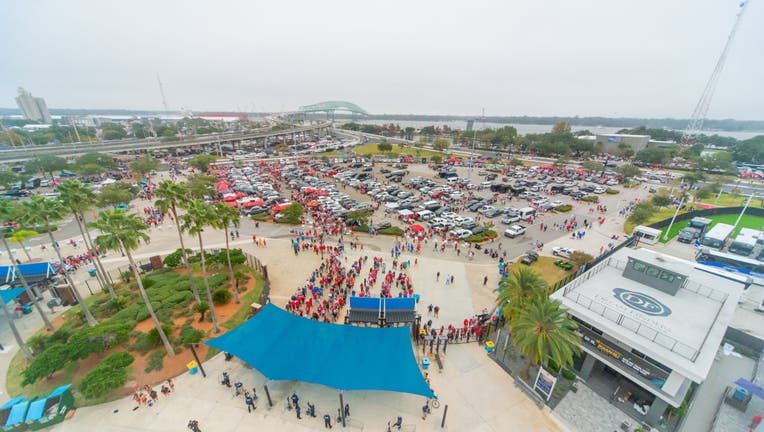 JACKSONVILLE, FL - OCTOBER 29: Fans tailgating and lining up to come into TIAA Bank Field prior to the college football game between the Florida Gators and Georgia Bulldogs on October 29, 2022, at TIAA Bank Field in Jacksonville, Florida. (Photo by J

The message read that West, legally known as Ye, was "right about the Jews." Ye tweeted earlier this month he would soon go "death con 3 on JEWISH PEOPLE," according to internet archive records.

In a Sunday statement, the universities said, "We strongly condemn the antisemitic hate speech projected outside TIAA Bank Field in Jacksonville after the Florida-Georgia football game Saturday night and the other antisemitic messages that have appeared in Jacksonville. The University of Florida and the University of Georgia together denounce these and all acts of antisemitism and other forms of hatred and intolerance. We are proud to be home to strong and thriving Jewish communities at UGA and UF, and we stand together against hate."

TIAA Bank Field is the home of the NFL's Jacksonville Jaguars. The franchise's owner Shad Khan responded with a statement:

"I’m personally dismayed to learn of antisemitic rhetoric and messages that marred the experience Saturday at the Florida-Georgia. I know this is not representative of our community, but it happened and it’s outrageous. It’s hurtful and wrong. It has to stop. I’m asking everyone to make it their mission to end the ignorance and hatred. Let’s be better."

The annual matchup between Southeastern Conference rivals Georgia Bulldogs and Florida Gators is known as "the World’s Largest Outdoor Cocktail Party." It's been played at a neutral site in Jacksonville since 1933, besides home-and-home games in 1994 and 1995.

Fans of both teams typically tailgate outside the stadium prior to the game.

Brands and business partners have been severing ties with Ye since the artist made the comments.

Brown announced plans to unite with Morehouse College to host a basketball tournament in Atlanta for student athletes with Donda Academy. The basketball team was reportedly eliminated from a showcase in the midst of reports a number of the academy’s teachers resigned due to the founder’s antisemitic remarks.