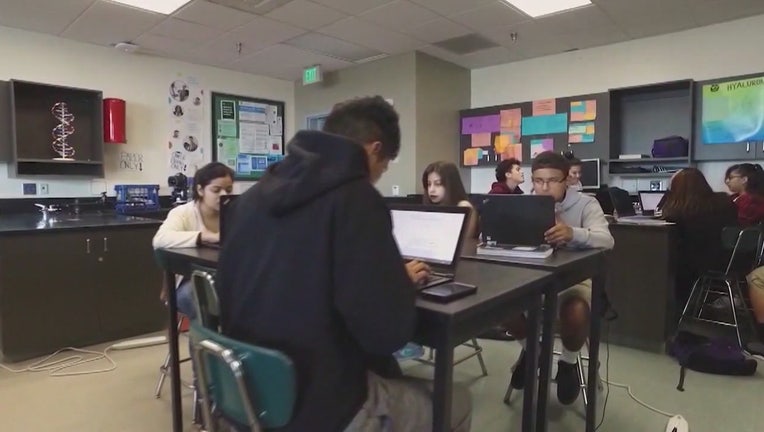 LOS ANGELES - The union representing teachers in the Los Angeles Unified School District is urging schools to keep campuses closed. The 2020-21 school year is set to begin next month.

“We are asking the district not to reopen schools physically but to instead focus on negotiation on a robust distance learning program for the fall of 2020, UTLA Bargaining Co-Chair Arlene Inouye said during Friday morning’s virtual update.

United Teachers Los Angeles said it is not safe to return to school campuses amid the ongoing coronavirus pandemic and that distance learning is the best way to go for the safety of students, teachers and staff.

The Los Angeles Unified Teachers Union is pushing back on the district's plan to reopen schools next month.

“We are asking the district not to reopen schools physically but to instead focus on negotiation on a robust distance learning program for the fall of 2020, UTLA Bargaining Co-Chair Arlene Inouye said during Friday morning’s virtual update.

During an appearance on Good Day LA in May, LAUSD Superintendent Austin Beautner confirmed school is back in session on August 18, whether students or back on campus or not.

Parents have voiced concerns about the lack of clear messaging about what the next school year entails.

UTLA wants the nation’s second-largest district to make a decision about the upcoming school year immediately so that teachers, students and families can prepare accordingly.

The union echoes what the California Teachers Association has stated. CTA represents about 315,000 members and said schools are not ready to reopen next month.

President Donald Trump tweeted Friday morning that "virtual learning has proven to be terrible compared to in-school or on-campus learning."

Earlier this week, Trump threatened to cut federal aid to schools that do not fully reopen.

"We have to make a strong stance against this dangerous, anti-science agenda,"  she said. She added that President Trump’s threat puts students, staff, and families in danger.

Vice President Mike Pence hinted that if a second stimulus package passes, additional funds could be issued to schools that fully reopen.

UTLA said they will take a poll and ask the district’s teachers whether or not they feel safe returning to campuses next month.

Those results are expected to be released by the end of the day.