HUNTINGTON BEACH, Calif. - The U.S. Air Force Thunderbirds are returning to Southern California Oct. 1 through 3, flying over the ocean in Huntington Beach during the 2021 Pacific Airshow.

For only the second time in U.S. history, the three North American jet teams – the U.S. Navy Blue Angels, the Canadian Forces Snowbirds and the U.S. Air Force Thunderbirds will perform together at one airshow. 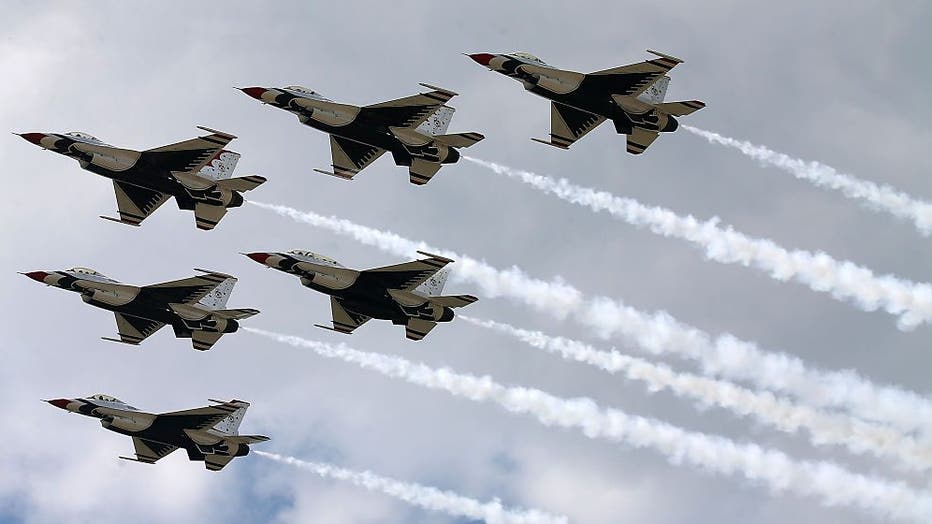 The US Air Force Thunderbirds are seen rehearsing their precision flying routine, September 18, 2015 in Forestville, Maryland. This weekend the Thunderbirds will perform at the Joint Base Andrews Air Show in Camp Springs, Maryland. (Photo by Mark Wil

"To say it’s an honor to have the Thunderbirds join us again would be an understatement," said Kevin Elliott, event director.  "The lineup of the 2021 Pacific Airshow will become a thing of legend with kids growing up to say, ‘I remember when all three North American Jet Teams flew together in Huntington Beach.’  If you know anything about Airshows, or even if you don’t, you will not want to miss this spectacle."

This year, the Thunderbirds will debut their new routine with formations that tell a story of patriotism, American ingenuity, teamwork, and inspiration. Fans can expect to see a new maneuver, Rapid Recovery, along with other modified maneuvers showcasing precision flying and combat capabilities of the F-16 Fighting Falcon.

Spanning over three days, the Airshow features the best in military and civilian flight demonstrations from teams all over the world, including past performances by the U.S. Navy Blue Angels, U.S. Air Force Thunderbirds, Royal Air Force Red Arrows and Canadian Forces Snowbirds.

This year, the Pacific Airshow will also host a two-night Afterburner Music Festival, the Official After Party, taking place on Friday, October 1 and Saturday, October 2. Rock & Roll Hall of Fame vocalist, guitarist and songwriter Sammy Hagar and his band "Sammy Hagar & The Circle" will headline the first show on Friday, October 1 along with Umphrey’s McGee and 90’s Rockshow. Chart-topping, award-winning country artist Sam Hunt will headline the show on Saturday, October 2 with accompanying performances by X Ambassadors and Cassadee Pope. Local DJ Mark Moreno will open the festival both nights.