A leak from a 9,000-gallon gasoline tanker caused the vehicle to catch fire, which spread to one nearby home, and ignited the atmosphere in storm drains, injuring two people and sending a huge plume of smoke into the sky over South Los Angeles Sunday morning.

Firefighters responded to a call at 7:45 a.m. about the smell of gas in the air at 216 W. Slauson Ave. Arriving units found the leaking tanker, and when fumes came into contact with an unknown ignition source the tanker exploded into flames, forcing firefighters back. A manhole cover was displaced

when fumes in the storm drain ignited and created underground pressure, according to Capt. Cody Weireter of the Los Angeles Fire Department.

Nearby structures were struck by flames, including a two-story single-family home that was damaged by fire and displaced a family, Weireter said.

Officials said one of the two victims suffered serious injuries, but they had no further information. There were no reported fatalities or firefighter injuries.

The blaze was extinguished in just under two hours by 72 firefighters.

The fuel type was initially reported to be natural gas, but was determined to be gasoline.

Arson investigators are on the scene to investigate, officials said, and LAFD Hazardous Materials specialists are also on scene to mitigate environmental impact and maintain safety for crews still working near the incident.

Southern California Gas Co. crews are also working alongside with the LAFD and are evaluating whether its equipment was damaged in the explosion, according to Melissa Bailey, a spokeswoman for the utility. 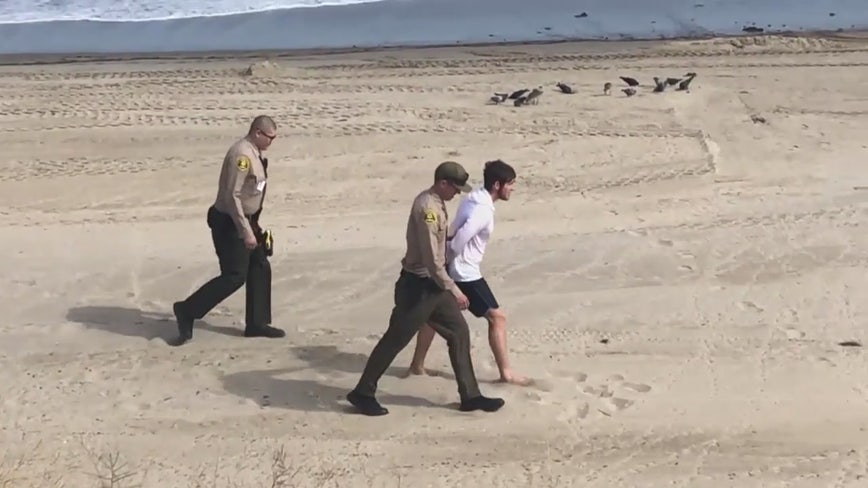