LAS VEGAS - The Transportation Security Administration announced their 2021 Cutest Canine and she truly is adorable.

Four-year-old Alona, a golden retriever, works as an explosives detection canine at the Las Vegas McCarren International Airport in Nevada.

Alona, whose full name is Nirvana-Alona, was voted as the cutest canine after a three-day nationwide social media contest held on Instagram, Twitter, LinkedIn and Facebook, according to a TSA news release.

Alona was born in Columbia and her hyphenated name has a special meaning, the TSA said. 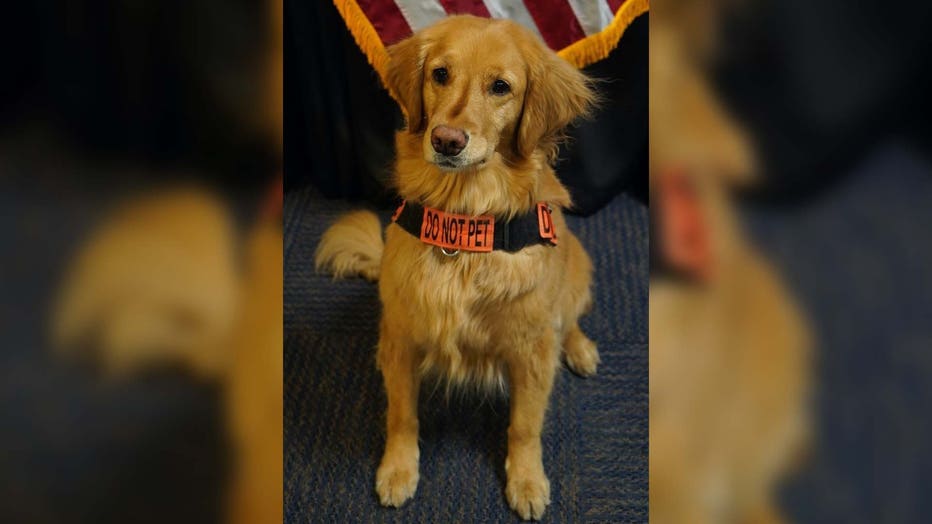 Her first name, Nirvana, was given at birth by her breeder, and Alona paid homage to one of the victims in the 9/11 attacks.

"Alona Abraham was an Israeli woman visiting her family in the U.S. and a passenger on Flight 175 from Boston to Los Angeles on that fateful morning. Nirvana-Alona’s spirit embodies the joy that Ms. Abraham brought to those around her," according to the TSA.

Alona is bilingual and can understand commands both in English and Spanish. Her favorite toy is a rubber ball that came with her from Columbia and she loves to play fetch when she’s not on duty.

Out of 77 contenders, Alona won the hearts of the masses.

In honor of National Dog Day, the TSA held the cutest canine contest to recognize some of the agency’s hardest-working members.

"The canines were nominated by TSA handlers from airports around the country and voted on by dog lovers nationwide," according to TSA, which utilizes canines in security operations throughout the country. "They are trained to detect the scent of explosives or explosive materials.

"These highly-skilled dogs are paired with handlers who utilize the working canine’s keen sense of smell when working throughout busy transportation environments," the agency added.

So far, TSA has trained more than 1,000 canine teams that work at airports and mass transit facilities across the U.S.