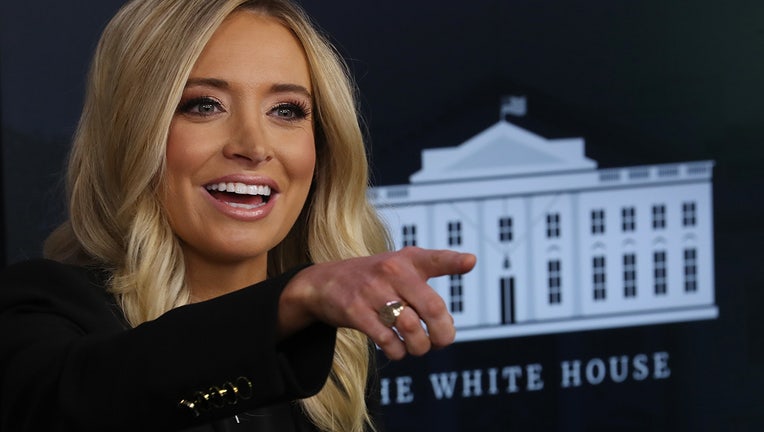 WASHINGTON - President Donald Trump’s new spokeswoman, Kayleigh McEnany, vowed on Friday not to lie to reporters from the podium as she made her debut at the first White House briefing by a press secretary in more than a year.

“I will never lie to you,” McEnany told reporters. “You have my word on that.”

McEnany, who joined the White House last month, took the stage behind a podium that had quite literally been collecting cobwebs before the president began the practice of holding his own daily briefings because of the coronavirus.

During past administrations, a formal briefing by a White House press secretary would hardly be news. But it was the first such briefing since March 11, 2019, when Sarah Sanders took to the podium for the first time in more than a month and was pressed on comments Trump reportedly made at a fundraiser claiming that Democrats hated Jewish people. Sanders left her post that summer, and her successor, Stephanie Grisham, never held a briefing during her entire nine-month tenure.

The briefings were must-see TV during the early days of the Trump administration, when viewers would tune in to see Trump’s first press secretary, Sean Spicer, spar with the press. But the media-obsessed Trump, who sees himself as his best spokesman, communications director and strategist, came to the conclusion last year that the spectacle had diminishing returns, people close to him said at the time.

The White House has long made the case that the briefings are less important in the Trump administration because the president is so accessible, answering reporters’ questions on an often-daily basis. Trump had been holding his own daily briefings through much of the pandemic, but scaled back this week amid concerns that he was doing himself political damage and as the White House tries to pivot toward a focus on reopening.

Spicer got off to a contentious early start with reporters when he used his first press briefing to falsely claim that Trump’s inauguration had drawn the biggest crowd ever. Sanders’ briefings were also heated, and she drew criticism for her own false statements, despite once telling reporters, “I don’t think it’s appropriate to lie from the podium or any other place.”

McEnany took a more genial approach at her debut, calling on every reporter in the room at least once and avoiding personal attacks. She grew more heated, though, as she brought up newly released documents related to former national security adviser Michael Flynn that she said should “scare every American citizen.”

Flynn pleaded guilty in December 2017 to lying to the FBI when questioned about his interactions with the Russian ambassador to the United States. The new documents reveal that the FBI had been prepared to drop its investigation into Flynn weeks before the interview because of a lack of evidence. And it included emails and handwritten notes, including one that read: “What’s our goal? Truth/admission or to get him to lie, so we can prosecute him or get him fired?”

McEnany also deflected questions about the numerous sexual misconduct allegations leveled at Trump over the years after his likely Democratic challenger, former Vice President Joe Biden, on Friday emphatically denied allegations from a former Senate staffer that he sexually assaulted her in the early 1990s, declaring flatly “this never happened.”

“The president has swiftly denied all of these allegations that were raised four years ago,” McEnany said. “He has always told the truth on these issues. He’s denied them immediately. Asked and answered in the form of the vote of the American people.”

“It matters how you come across on TV,” Fleischer said on Fox News Channel after the briefing. “On the substance, she had facts. She had statistics. Oh boy, is she articulate.

“On the style, I mean she was just comfortable. You always listen for: Is there a hiccup in the voice? Is she nervous? Is there something about being in that room where you think the pressure might get to her? She was cool and calm throughout it all.”

Grisham, who succeeded Sanders and Spicer, was arguably the nation’s least visible press secretary in modern history. While she made occasional appearances on the Fox News Channel, she preferred to tape her interviews in a studio to avoid having to speak to reporters who gather on the White House driveway to interview officials after they appear on TV via cameras set up outside the executive mansion.