Trump says US took action ‘to stop a war’ in Iran

President Donald Trump spoke on Friday from Palm Beach, Florida, as he was leaving his Mar-a-Lago property to attend a rally, in his first on-camera public comments since his order to kill a powerful Iranian general.

WASHINGTON - President Donald Trump spoke on Friday from Palm Beach, Florida, as he was leaving his Mar-a-Lago property to attend a rally, in his first on-camera public comments since his order to kill a powerful Iranian general.

“We took action last night to stop a war. We did not take action to start a war,” the president said.

Trump had declared that he ordered the killing of Soleimani because he had killed and wounded many Americans over the years and was plotting to kill many more.

Trump said Friday that the Iranian general was plotting “imminent and sinister attacks.”

“We caught him the act and terminated him,” he said.

Soleimani should have been killed “long ago,” Trump said, adding that his “reign of terror” is now over. “The world is a safer place without these monsters,“ Trump said.

The president added, “We do not seek regime change,” but the nation's use of “proxy fighters to destabilize its neighbors must end and it must end now.“

Trump also said that targets of possible retaliation have been identified “and I am ready and prepared to take whatever action is necessary" in regards to Iran.

The strike marked a major escalation in the conflict between Washington and Iran, as Iran vowed “harsh retaliation" for the killing of the senior military leader. The two nations have faced repeated crises since Trump withdrew from the 2015 nuclear deal and imposed crippling sanctions.

The United States urged its citizens to leave Iraq “immediately” as fears mounted that the strike and any retaliation by Iran could ignite a conflict that engulfs the region. 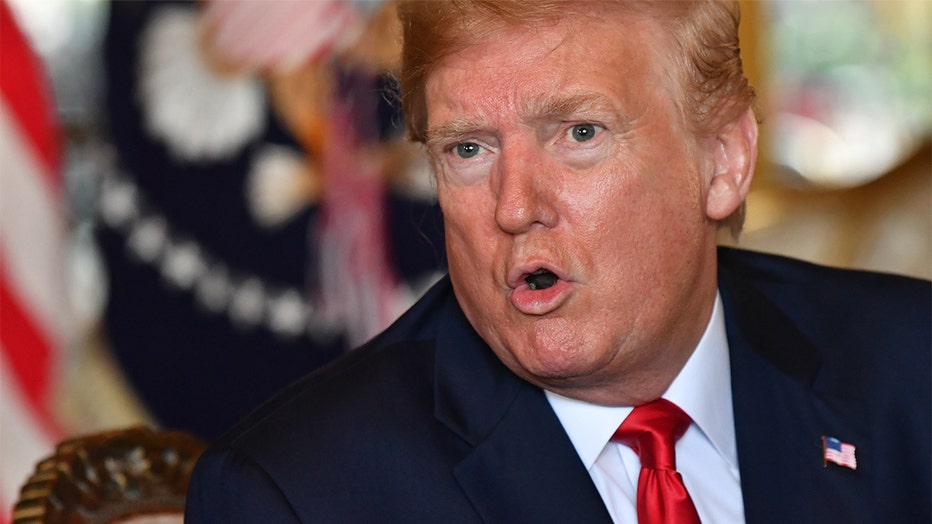 U.S. President Donald Trump answers questions from reporters after making a video call to the troops stationed worldwide at the Mar-a-Lago estate in Palm Beach Florida, on Dec. 24, 2019. (Photo by NICHOLAS KAMM/AFP via Getty Images)

Defense officials said Friday that the U.S. is sending nearly 3,000 more Army troops to the Mideast as reinforcements in the volatile aftermath of the killing of the Iranian general.

Also Friday, the Pentagon placed an Army brigade in Italy on alert to fly into Lebanon if needed to protect the American Embassy there, part of a series of military moves to protect U.S. interests in the Middle East. Speaking on the condition of anonymity, an official said the U.S. could send 130 to more than 700 troops to Beirut from Italy. The official was not authorized to be identified.

Reinforcements were ordered as U.S. officials said they had compelling intelligence that Soleimani was planning a significant campaign of violence against the U.S.

Secretary of State Mike Pompeo defended the strike as “wholly lawful,” also saying that Soleimani posed an “imminent” threat against the U.S. and its interests in the region.

“There was an imminent attack,” Pompeo told FOX News. “The orchestrator, the primary motivator for the attack, was Qassem Soleimani."

The White House did not inform lawmakers before the strike. It was expected to give classified briefings to members of Congress and staff in the afternoon. Defense Secretary Mark Esper notified House Speaker Nancy Pelosi of the strike shortly before the Pentagon confirmed it publicly.

Pompeo called world leaders Friday to explain and defend Trump’s decision to order the airstrike that has sparked fears of an explosion of anti-American protests as well as more violence in the already unstable Middle East.

In his calls with the British and German foreign ministers as well as China’s state councilor, Pompeo stressed that Trump acted to counter an imminent threat to U.S. lives in the region but also that the U.S. is committed to “de-escalation” of tensions, according to the department's summaries of the conversations.

De-escalation was not mentioned in the department's summary of his call with the French foreign minister, nor in his calls with Afghanistan’s President Ashraf Ghani or the Pakistani military chief of staff. In those calls Pompeo “underscored the Iranian regime’s destabilizing actions through the region and the Trump Administration’s resolve in protecting American interests, personnel, facilities and partners," the department said.