Former President Donald Trump slammed the Department of Justice following the agency's opposition to his request for a "special master" to review documents seized from his Mar-a-Lago estate, claiming he had already "declassified" the materials.

WASHINGTON - Lawyers for former President Donald Trump asked the U.S. Supreme Court on Tuesday to step into the legal fight over the classified documents seized during an FBI search of his Florida estate, escalating a dispute over the powers of an independent arbiter appointed to inspect the records.

The Trump team asked the justices to overturn a lower court ruling and allow the arbiter, called a special master, to review the roughly 100 documents with classification markings that were taken in the Aug. 8 search of Mar-a-Lago.

A three-judge panel from the Atlanta-based U.S. Court of Appeals for the 11th Circuit last month limited the special master's review to the much larger tranche of non-classified documents. The judges, including two Trump appointees, sided with the Justice Department, which had argued there was no legal basis for the special master to conduct his own review of the classified records.

But Trump's lawyers said in their application to the Supreme Court that it was essential for the special master to have access to the classified records to "determine whether documents bearing classification markings are in fact classified, and regardless of classification, whether those records are personal records or Presidential records." 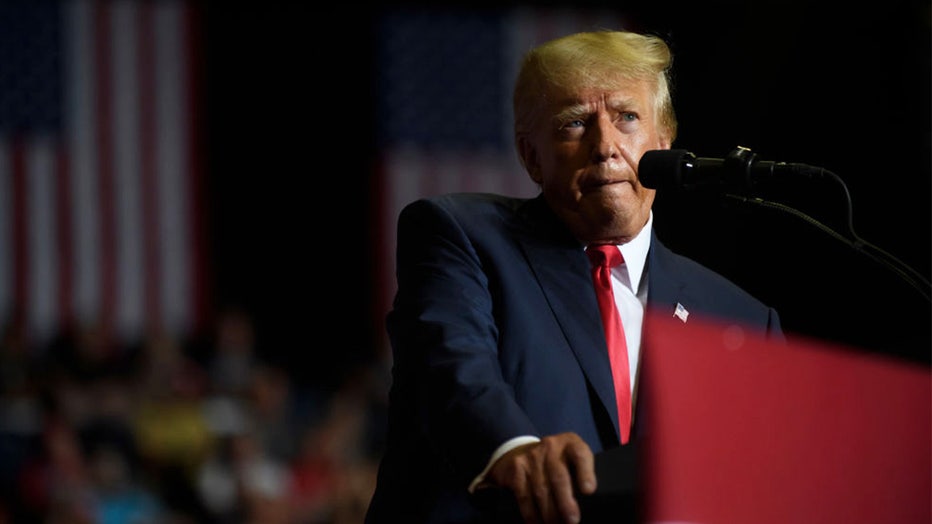 FILE - Former President Donald Trump speaks at a Save America Rally to support Republican candidates running for state and federal offices in the state at the Covelli Centre on Sept. 17, 2022, in Youngstown, Ohio. (Jeff Swensen/Getty Images)

"Since President Trump had absolute authority over classification decisions during his Presidency, the current status of any disputed document cannot possibly be determined solely by reference to the markings on that document," the application states.

It says that without the special master review, "the unchallenged views of the current Justice Department would supersede the established authority of the Chief Executive." An independent review, the Trump team says, ensures a "transparent process that provides much-needed oversight."

The FBI says it seized roughly 11,000 documents, including about 100 with classification markings, during its search. The Trump team asked a judge in Florida, Aileen Cannon, to appoint a special master to do an independent review of the records.

Cannon subsequently assigned a veteran Brooklyn judge, Raymond Dearie, to review the records and segregate those that may be protected by claims of attorney-client privilege and executive privilege. She also barred the FBI from being able to use the classified documents as part of its criminal investigation.

Trump’s lawyers submitted the Supreme Court application to Justice Clarence Thomas, who oversees emergency matters from Florida and several other Southern states. Thomas can act on his own or, as is usually done, refer the emergency appeal to the rest of the court. Late Tuesday the court said the government was being asked to respond to the petition by Oct. 11.

Thomas has previously come under scrutiny for his vote in a different Trump documents case, in which he was the only member of the court to vote against allowing the U.S. House committee investigating the Jan. 6, 2021, Capitol riot to obtain Trump records held by the National Archives and Records Administration.

Thomas’ wife, Virginia "Ginni" Thomas, is a conservative activist and staunch Trump supporter who attended the Jan. 6 "Stop the Steal" rally on the Ellipse and wrote to then-White House chief of staff Mark Meadows in the weeks following the election encouraging him to work to overturn Biden’s victory and keep Trump in office. She also contacted lawmakers in Arizona and Wisconsin in the weeks after the election. Thomas was recently interviewed by the House committee investigating the Jan. 6 insurrection and she stood by the false claim that the 2020 election was fraudulent.