No. 10 Penn State vs. No. 5 Michigan highlights huge divisional games in Week 7 of college football on FOX this weekend. (FOX Sports)

College football season enters Week 7, and FOX will have another trio of must-see games on the docket Saturday.

Coverage begins at 10 a.m. ET with Big Noon Kickoff on FOX followed by a showdown of top-10 teams when No. 10 Penn State (5-0) travels to Ann Arbor for a Big Ten division battle with No. 5 Michigan (6-0) at noon ET Saturday. 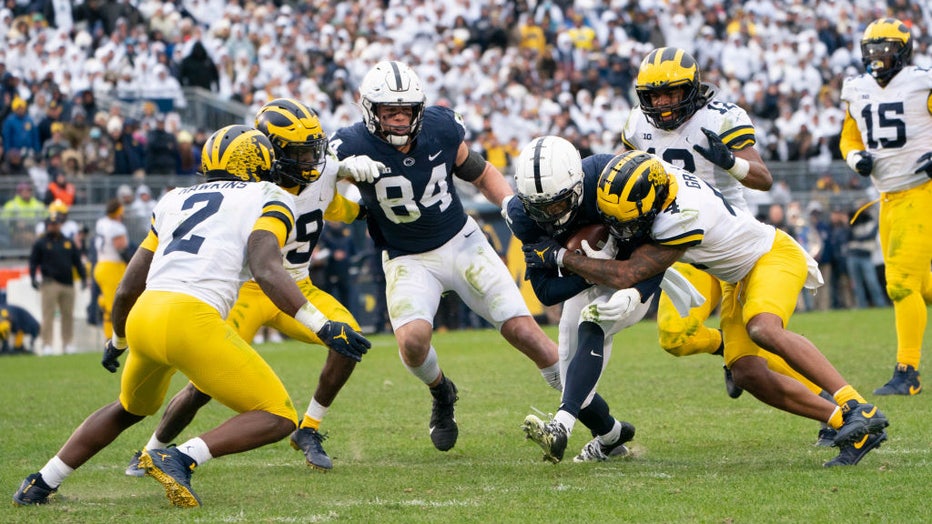 FILE- Michigan DB Vincent Gray (4) tackles Penn State receiver Jahan Dotson (5) running with the ball during the second half of the Michigan vs. Penn State game in 2021. (Gregory Fisher/Icon Sportswire via Getty Images)

The winner of Saturday’s Big Ten battle will bolster their chances to win out to claim the conference championship and earn a spot in the College Football Playoff.

A key matchup to watch is Michigan running back Blake Corum vs. Penn State’s defense. Corum has run for 500 yards, for nearly 6 yards per carry, and four TDs in three Big Ten games.

He ranks third in the FBS with 735 yards rushing, including a 19-plus yard run in every game, and second with 11 touchdowns. The Nittany Lions are only giving up 79.6 yards rushing per game, which ranks fifth in the nation.

Wisconsin’s interim coach Jim Leonhard will be going for his second straight win following the firing of Paul Chryst. The Badgers ended a two-game losing streak with a big win last week against Northwestern to keep their chances of winning the Big Ten West crown alive.

Michigan State is looking to snap a four-game losing streak after a blowout loss to No. 3 Ohio State. It is the longest winless streak for the Spartans since 2019 when they lost five straight games.

Michigan State RB Jalen Berger, a Wisconsin transfer, leads the Spartans in rushing with 308 yards and four touchdowns. Berger will face a tough test against a revamped Badgers defense.

Wisconsin has won two of the last three regular-season meetings against Michigan State, winning in 2016 and 2019. The Spartans last win over the Badgers came in 2012.

This primetime matchup features the league’s best two pass defenses. Utah is holding teams to 179.3 yards passing a game, while USC is limiting opponents to 198.8 passing yards per game.

USC quarterback Caleb Williams is having a great season so far leading an explosive Trojans offense. He’s thrown 14 touchdowns and rushed for another three scores.

A win over Utah will put USC in a favorable spot to reach the Pac-12 title game. Their only remaining contest against a ranked conference team will be at No. 11 UCLA on Nov. 19 (No. 12 Oregon isn't on the schedule this season).

The Trojans are one of three undefeated Power Five teams that have matched or surpassed their win totals from a season ago (they were 4-8 in 2021). Utah's last home loss was Nov. 21, 2020 to the Trojans.