Thanksgiving travel in full swing, weather will have limited impact on flights

No issues across most of the U.S. Snow and gusty winds could lead to travel delays in parts of the Northern Rockies, including Salt Lake City and Montana Airports. Overall impacts will be very limited.

The FOX Forecast Center is tracking a storm system that could create unfavorable travel weather towards the latter half of Thanksgiving week.

Lingering issues remain in western New York, which is digging out from under more than 6 feet of snow in some areas from a lake-effect snowstorm.

Elsewhere, later in the week, freezing temperatures and inclement weather could cause flight delays and cancellations, impacting nearly 5 million expected to fly this holiday.

Here's a look at how the weather might impact flights around Thanksgiving and when delays and cancellations could begin to creep up.

Mild weather ahead of Thanksgiving for much of U.S. 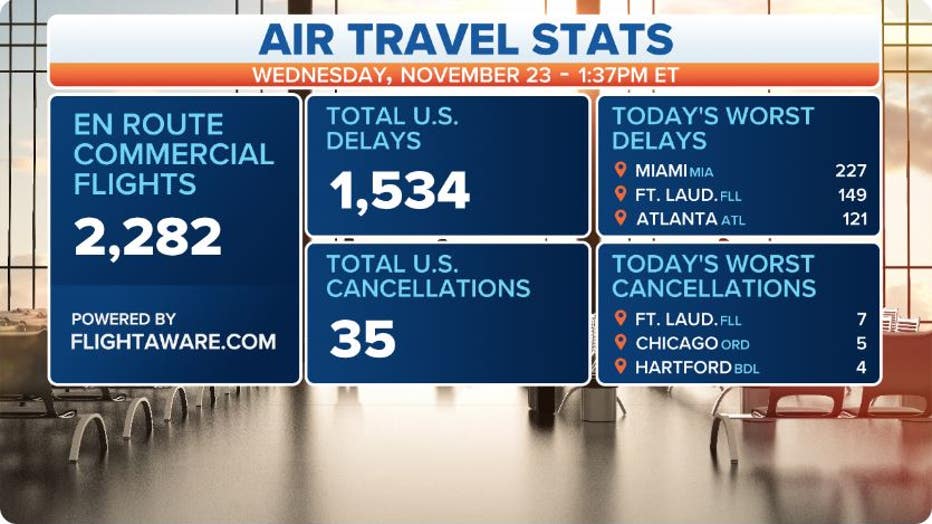 TIPS TO PREPARE FOR BUSY THANKSGIVING TRAVEL AT AIRPORTS

For airline travelers taking to the sky on Wednesday, the weather will be primarily cooperative, with mild temperatures across most areas of the U.S. as a warming trend will spread heading into Thanksgiving.

Airline cancellation numbers were low Wednesday but delayed flights were starting to rise early in the day.

Pilots are contending with some rain and fog in the Southeast, including Florida.

At Miami International Airport, a ground stop was issued Wednesday morning due to fog and driving up flight delay numbers.

In the West, snow and gusty winds could lead to travel delays in parts of the Northern Rockies, including Salt Lake City and Montana Airports. Still, flight impacts due to weather will be minor. 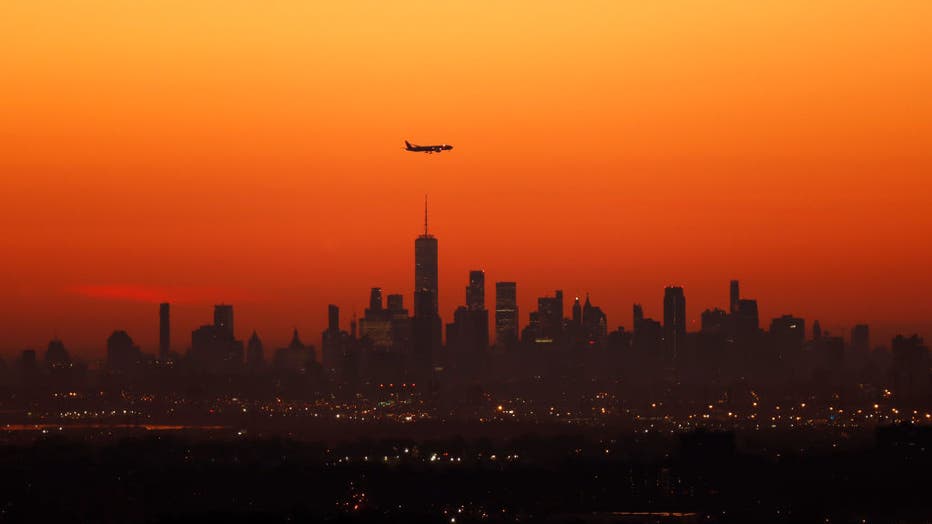 An airplane on approach to Newark Liberty Airport passes over the skyline of lower Manhattan and One World Trade Center as the sun rises in New York City on November 23, 2022, as seen from West Orange, New Jersey. (Photo by Gary Hershorn/Getty Images

On Thanksgiving and after the holiday, the weather will be more active across the U.S.

The FOX Forecast Center is tracking a weak system out of the Pacific Northwest expected to strengthen and arrive in the Midwest on Thanksgiving Day.

The system will move into, then from the Gulf Coast into the Mid-Atlantic and Northeast, with the potential to cause flight delays through the weekend.

Jackson, Mississippi, along Interstate 20 all the way to Shreveport and into Tyler, Texas, could see widespread heavy rain.

On the cold side of this system, snow is forecast in the Texas panhandle and eastern New Mexico beginning Thursday. Forecast models indicate 3 to 5 inches of snow could fall in Amarillo. 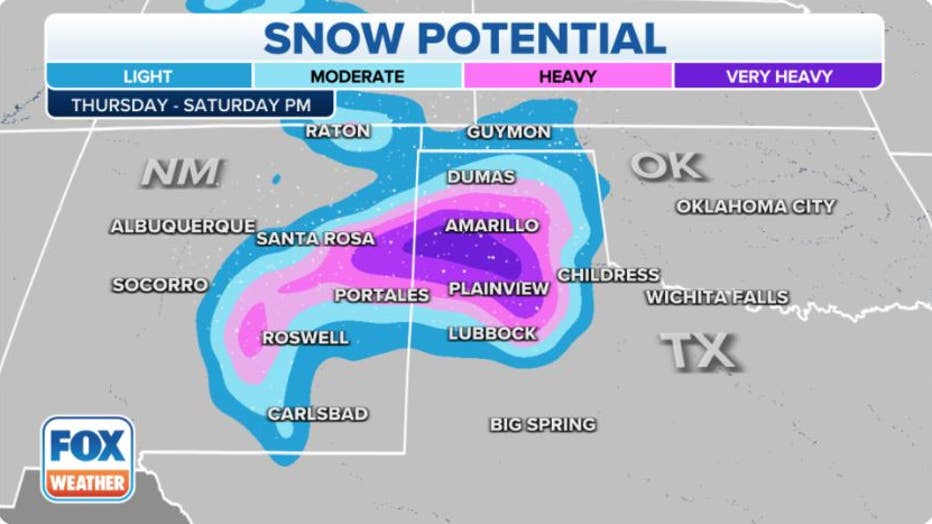 THANKSGIVING WEATHER FORECAST 2022: NATIONAL OUTLOOK AND POSSIBLE WEEKEND WASHOUT IN EASTERN HALF OF US

Travelers in the Southeast are likely to see delays due to the storm on Thanksgiving in Dallas, Houston, New Orleans and Memphis. 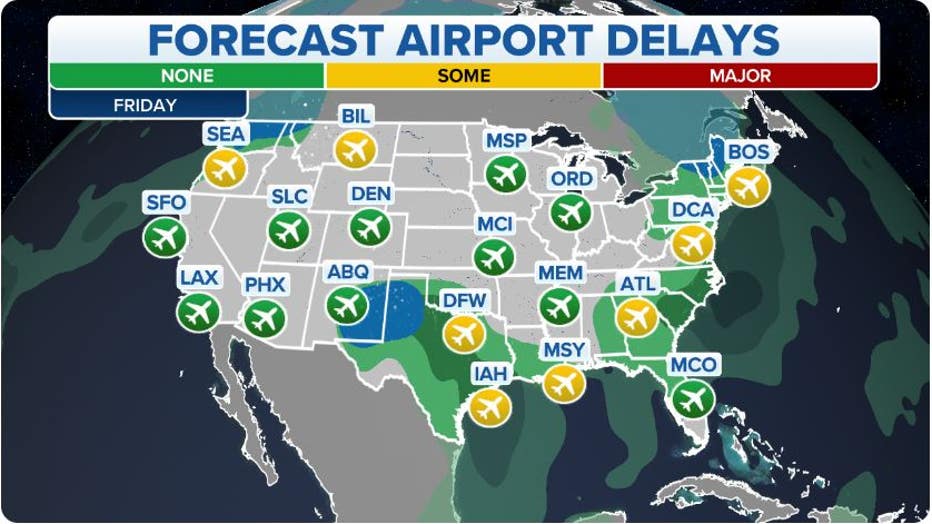 Most flight delays and cancellations will happen for those flying home the day after Thanksgiving or anytime this weekend.

The same system bringing rain to the Southeast on Thanksgiving will shift up the coast Friday and Saturday spreading rain from the Gulf Coast into the Tennessee Valley and the Appalachian Mountains. 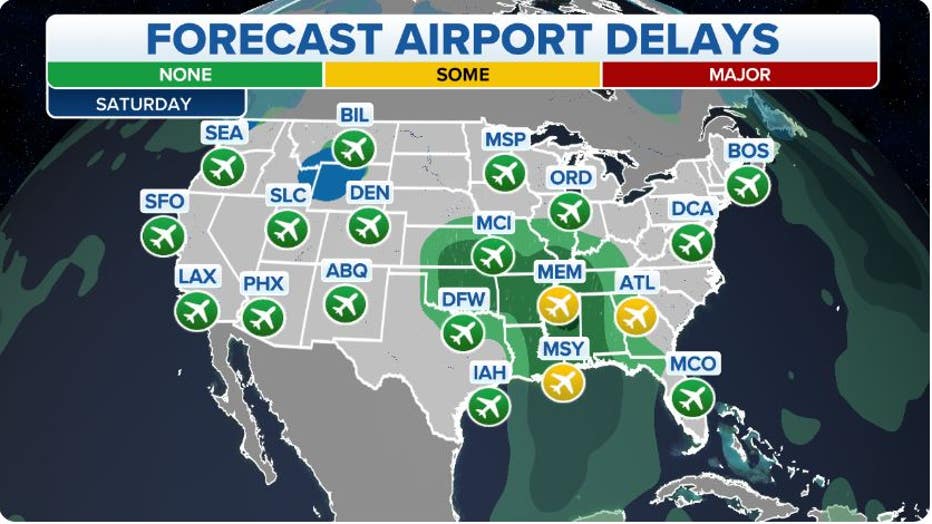 Rain will push up the Interstate 95 corridor into the Northeast later this weekend. 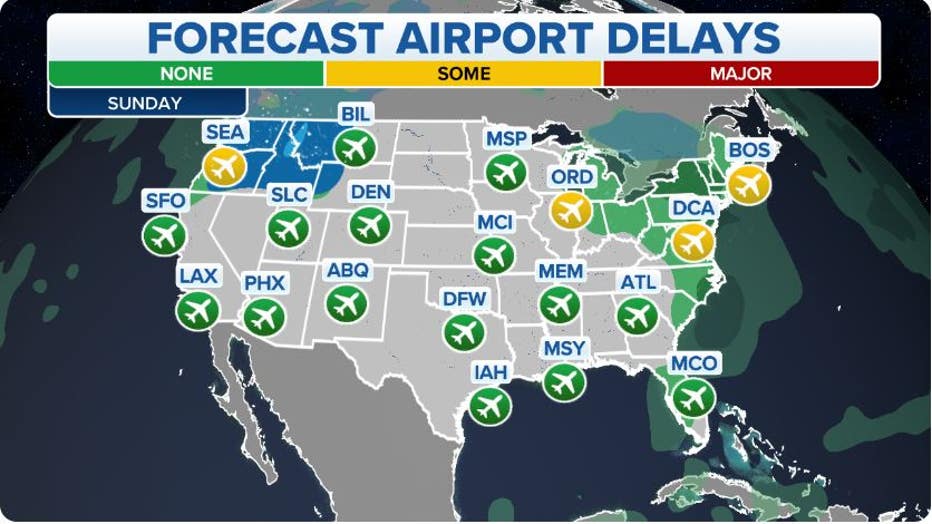 "Sunday we could have rain in New York moving up toward Boston with showers extending over toward Chicago," says FOX Weather Meteorologist Britta Merwin. "So a lot of big airports could be impacted on Sunday by rain showers. Thankfully it doesn't look to be a snowstorm, but unfortunately, rain could cause some issues."

The weather ripple effect on flights

Remember, bad weather doesn't necessarily have to be near the airport to cause delayed or canceled flights. Weather across the U.S. can have a ripple effect on airlines. Even airports hundreds of miles away from the nearest snowfall or storm could be impacted.

Some airports are notorious for delays and cancellations during holiday travel and winter months, including Newark Liberty, Denver and O'Hare international airports.