All eyes are on Texas after a gunman opened fire at an elementary school in Uvalde. The mass violence, which resulted in the deaths of at least 19 children, is now the deadliest school shooting in Texas history.

The state has seen several mass shootings since 1966, when a college student shot down at people from the University of Texas campus tower.

While there is no concrete definition of "mass shooting," most researchers define it as four or more victims killed in a public place. Domestic violence cases at home and gang-related violence are not included.

In the immediate aftermath of the Sandy Hook school shooting, Congress passed a law that provided federal law enforcement assistance for active shooter situations. In it, was a description of mass killings as three or more killed.

The timeline below shows mass shootings, as defined above, in Texas from 1966 to today.

A student sniper barricaded himself atop a University of Texas campus tower, shooting at the people down below before being shot by Austin police officers.

A gunman burst into First Baptist Daingerfield Church on the morning of June 22, 1980 as the congregation was singing a hymn. He shouted "This is war!" and opened fire.

The gunman killed three men, one woman and a 7-year-old girl.

A truck driver went on a shooting rampage in Grand Prairie, killing six people and injuring five others.

According to the Associated Press, the Dallas man armed with two pistols and a rifle walked in Western Transfer Co. building in Grand Prairie and shot three of his supervisors.

The shooter was killed in a gunfight with police. 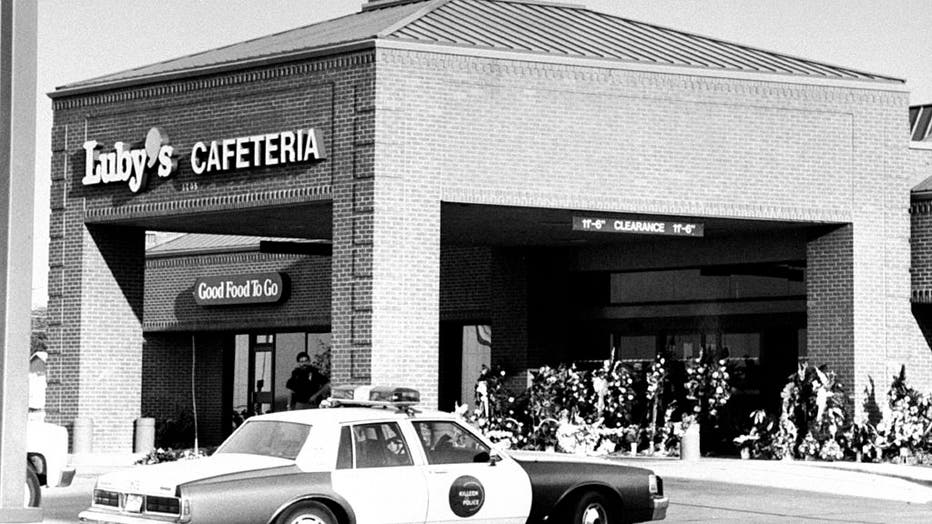 Overall view of city police car parked nr.the front entrance to Luby's Cafeteria w. wreaths & baskets of flowers placed there by mourners for the 23 killed & the 27 others wounded in a massacre by crazed gunman George Hennard who used two 9-m

On Oct. 16, 1991, a man drove his truck into the glass windows of Luby's Cafeteria in Killeen. He got out of his truck and began firing upon customers.

In less than 15 minutes, he had shot 50 people. Many died at the scene, some afterward. Twenty-three people died as a result of the shooting.

The gunman took his own life after being confronted by law enforcement. 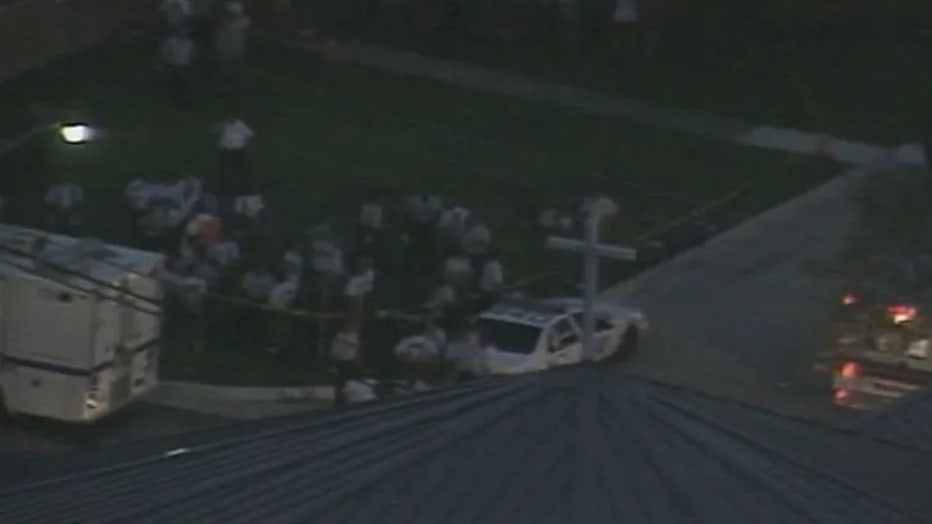 On Sept. 15, 1999, a man walked into Fort Worth's Wedgwood Baptist Church and opened fire. He killed seven people then turned the gun on himself.

Several others were wounded and rushed to the hospital. 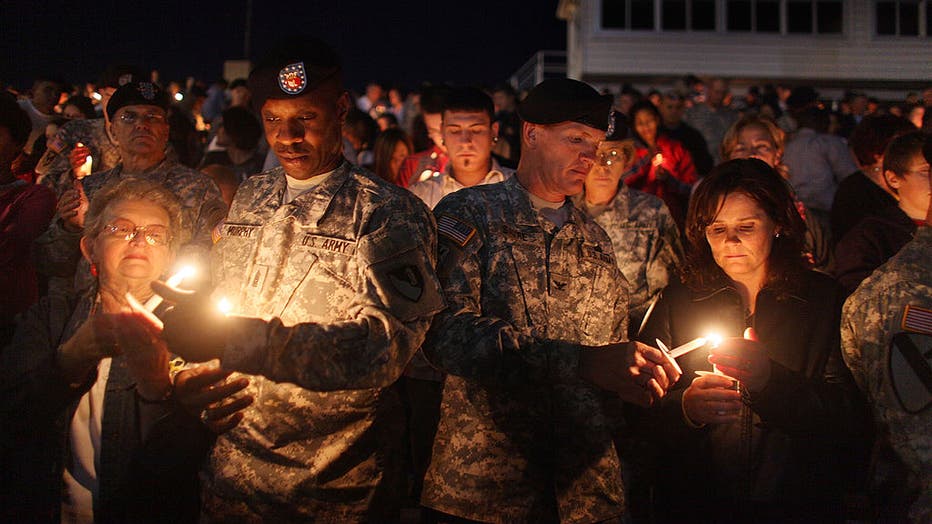 On Nov. 5, 200, a U.S. Army major went on a shooting rampage at the Soldier Readiness Center on the grounds of Fort Hood.

The army psychiatrist killed 13 people and wounded 30 others at the military base. The convicted gunman said he was inspired by al-Qaida and an anti-American cleric. He said he attacked unarmed soldiers preparing for deployment to protect Muslim insurgents from American attacks abroad. 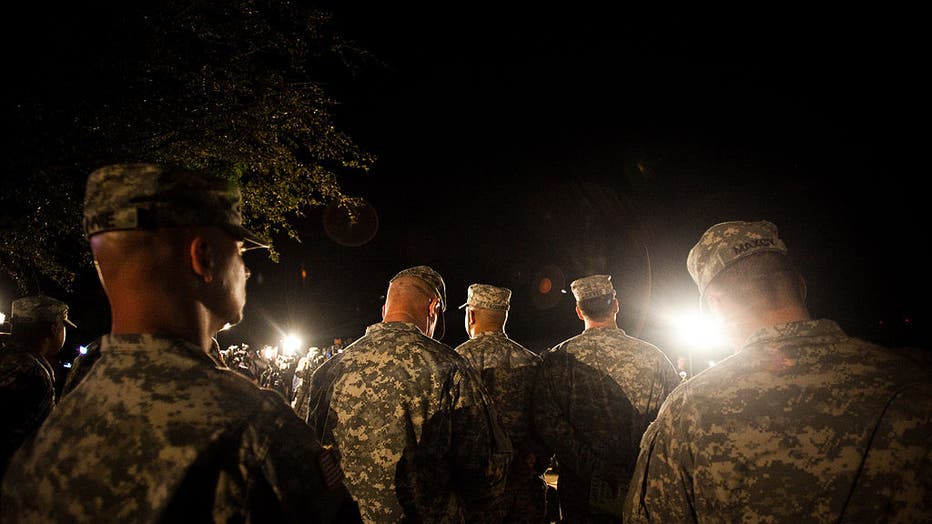 FILE: Soldiers watch over General Mark Milley, III Corps and Fort Hood Commanding General, as he speaks to media during a press conference about a shooting that occurred at Fort Hood Military Base on April 2, 2014. (Photo by Drew Anthony Smith/Getty

A Fort Hood shooter's rampage followed an argument over the denial of his request for leave and did not appear to be due to some ongoing mental problem, according to the U.S. Army. 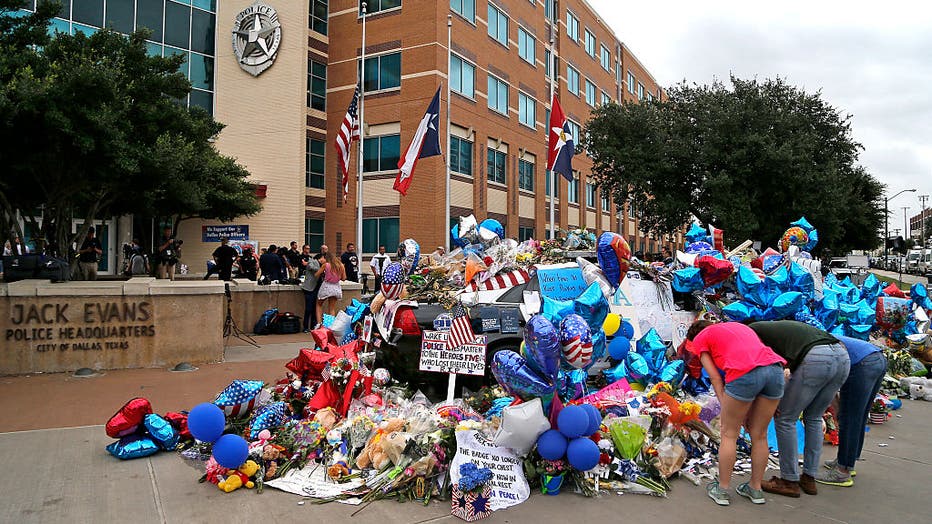 FILE: Items left by the public are increasing the size of the memorial in front of the Jack Evans Police Headquarters building on July 11, 2016 in Dallas, Texas. (Photo by Stewart F. House/Getty Images)

On July 7, 2016, five police officers were killed, and seven others were injured in an ambush by a lone gunman during a march against recent officer-involved shootings.

The 25-year-old suspect from Mesquite, Texas once served in the military.

It was the deadliest incident for U.S. law enforcement since September 11. 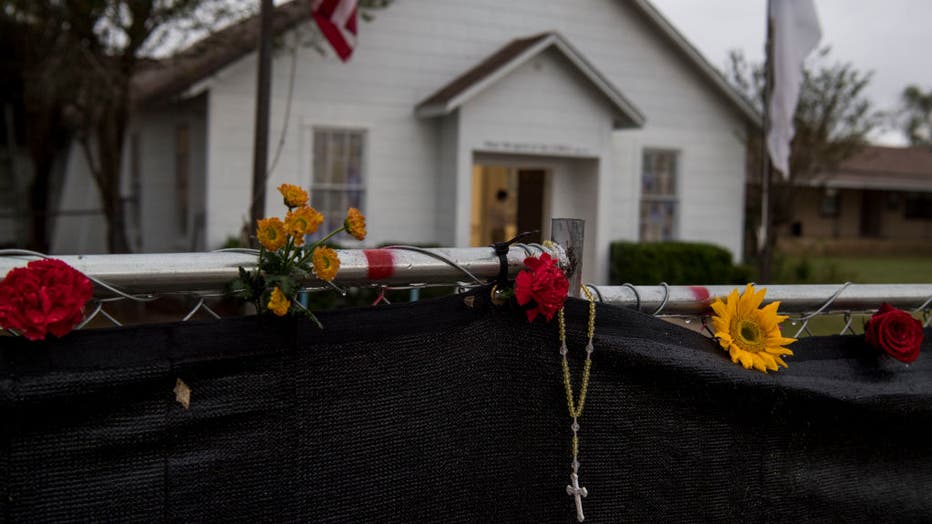 On Nov. 5 2017, a gunman killed 26 people, including an unborn child, and injured 20 others at First Baptist Church in Sutherland Springs, Texas.

The 26-year-old gunman died of a self-inflicted gunshot wound after he was chased by bystanders and crashed his car. 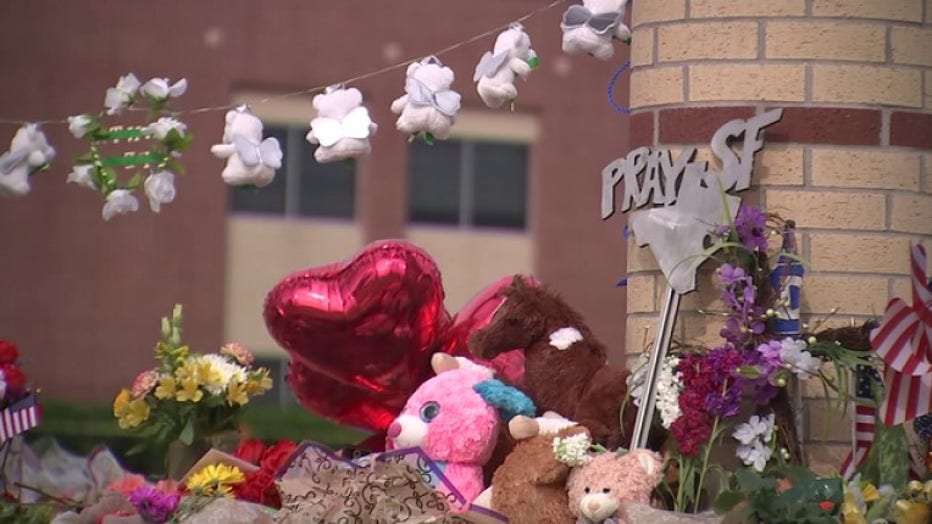 A memorial in front of Santa Fe High School where a shooting on May 18, 2018, left 10 people dead and 13 others injured.

On May 18, 2018, a 17-year-old student opened fire on fellow students and school staff at Santa Fe High School.

Armed with a shotgun and pistol, the gunman shot 23 people, killing 10 of them – eight students and two teachers.

Four years after the massacre, the admitted shooter remains incompetent to stand trial. 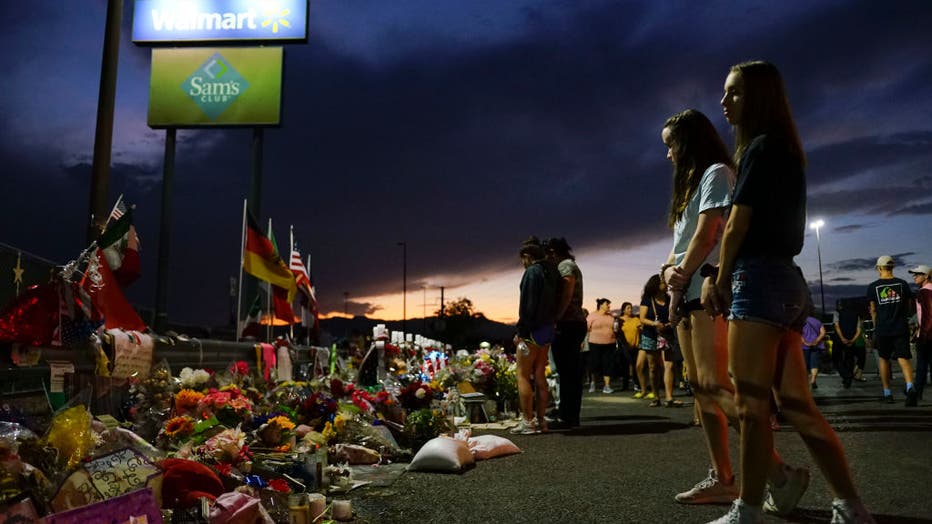 The 21-year-old suspected shooter surrendered to police after the attack saying, "I'm the shooter," and that he was targeting Mexicans. 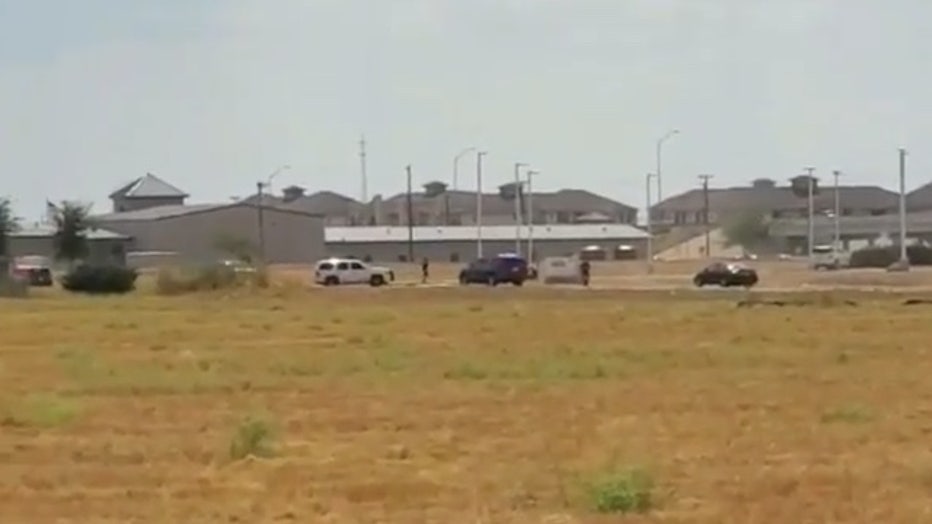 A suspect hijacked mail truck in Odessa, Texas, and shot at random. Seven people died and 25 were injured. Three law enforcement officers were among those injured, one from DPS Midland County, one from Odessa PD, and one from Midland PD.

A 17-month-old has been airlifted to University Medical Center Lubbock.

It was the third major mass shooting to take place in the U.S. in August 2019, following the El Paso Walmart shooting and the Dayton shooting. 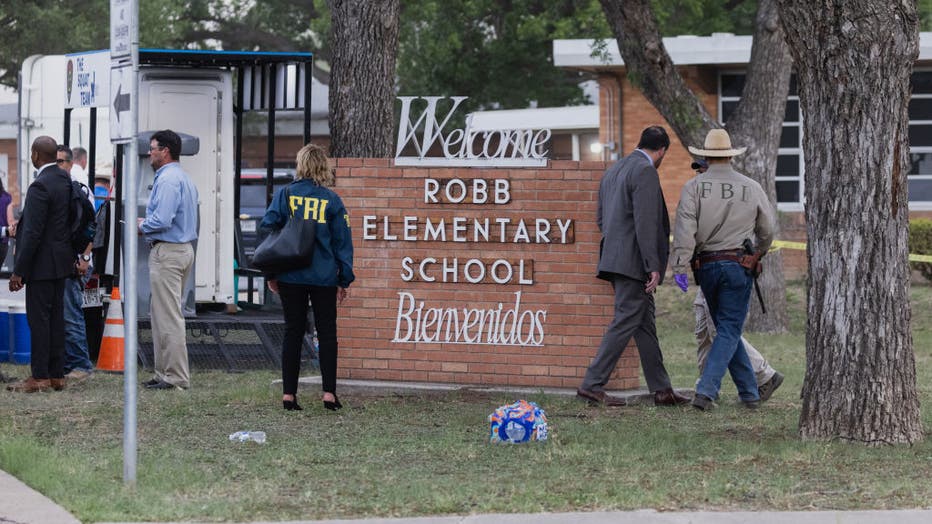 Law enforcement work the scene after a mass shooting at Robb Elementary School where at least 19 children and two adults were killed on May 24, 2022 in Uvalde, Texas. (Photo by Jordan Vonderhaar/Getty Images)

An 18-year-old gunman opened fire at Robb Elementary School in Uvalde on May 24, 2022, killing at least 19 children and two adults.

The shooter was killed by law enforcement.

It is the deadliest school shooting since the massacre at Sandy Hook Elementary School in Newton, Connecticut.

MORE: What we know about Texas elementary school shooting suspect

The Associated Press, FOX 4 News, and FOX 7 Austin contributed to this report.