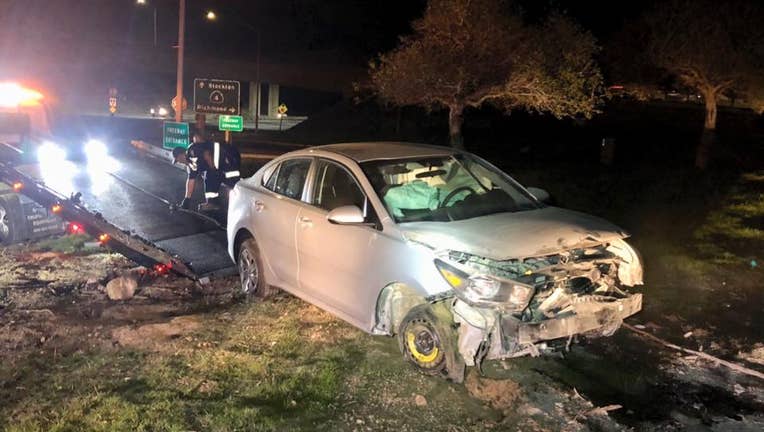 A Kia burst into flames after teens crashed it into an embankment in Concord. Feb. 17, 2020 (CHP)

CONCORD, Calif. - Four teenagers were detained after the California Highway Patrol said they were in a car where the driver was speeding recklessly at more than 100 mph, led them on a chase, and then ditched their car, which burst into flames.

In a Facebook post, the CHP said the male driver, who is a teen, will be booked into the Contra Costa County Juvenile detention center and the other boys will remain in CHP custody until a parent or legal guardian arranges to pick them up. The CHP did not state how old each boy is.

The saga began on Monday just before 6 p.m., when CHP officers saw a 2019 silver Kia Rio speeding on Highway 4 westbound at Laurel Road. Officers tried to stop the Kia, but the driver would not stop, despite police sirens and flashing lights, the CHP said.

The Kia driver led police on a chase, but officers lost sight of the car because they didn’t want to pursue them at such high speeds, the CHP said.

However, officers saw the Kia had crashed into an embankment off the highway at Willow Pass road in Concord and it had caught fire.

A CHP officer immediately exited his patrol car and put out the blaze with an extinguisher. No one was inside the Kia. Witnesses told officers they saw the teens run away from scene.

CHP towed the Kia and set up a perimeter to locate the suspects in and around the Willow Pass Road and Evora Road area. Shortly after the area was surrounded, all four teens were found and detained, the CHP said.

No one reported any serious injuries.

“Reckless driving over 100 mph on the highway that endangers all drivers safety will not be tolerated,” the CHP said in its post. “These extremely poor choices from unsafe drivers are the exact drivers we are continually attempting to get off the road at all times.”