Florida teen is recovering in the hospital after a nasty shark attack in Taylor County. Addison Bethea, 17, was scalloping with her brother, Rhett, when she felt something tap her led. Just seconds later she was being pulled underwater.

TAYLOR COUNTY, Fla. - A Florida teenager who fought off a shark that attacked her in Taylor County will have to have her leg amputated.

Addison Bethea, 17, of Perry, Florida, was scalloping with her brother, Rhett, off the coast of Keaton Beach when she felt something tap her leg. Just seconds later, she was being pulled underwater by an estimated 9-foot shark.

"She was fighting the shark. She tried to pull it off of her leg with her bare hands," her mother told FOX 35 News. "She’s got bite marks on her hand."

Addison is being treated at Tallahassee Memorial HealthCare where she has undergone two surgeries already. In an update on Sunday, the hospital said that she will have to have a third surgery to amputate her injured leg.

RELATED: 'She was fighting the shark': Mom of Florida teen attacked by shark describes terrifying ordeal

"She suffered devastating injury to her upper right leg, including the loss of her quadriceps, the four muscles in the front of the thigh that work together to keep the kneecap stable and allow for lower leg extension. The bite also caused massive nerve and vascular damage," the hospital wrote on Facebook. "The injuries to Addison’s leg are so extensive that they will require amputation just above the right knee, which will take place during surgery on Tuesday." 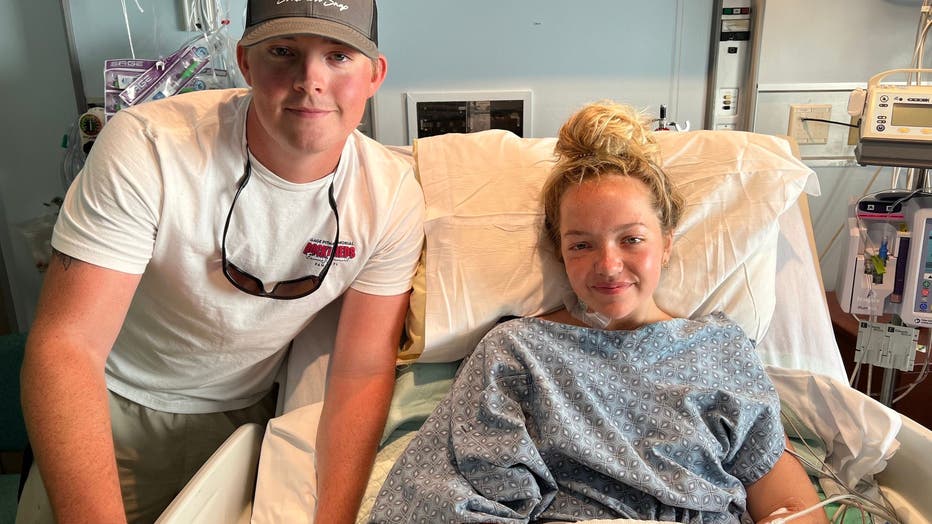 "This is the best-case scenario for Addison, and the best option to get her back to the most normal life possible," Addison’s mother said.

The hospital said that Addison has a long road to recovery that will require extensive rehabilitation, but her family said she is staying upbeat and strong. She said she will be back in the ocean once she heals, according to the Facebook post.

"Addison got a little emotional today when we told her about the amputation," her mother said, according to the post. "But she has accepted it, and she knows this is her best path forward. She’s embracing it and trying to keep a positive outlook."

A GoFundMe has been set up to help Addison and her family with medical expenses. As of Tuesday morning, it has raised over $25,000.