Search underway for suspect who fired at officers

Part of the 605 Freeway was closed Oct. 15 after a homeless man fired at officers, officials said.

LOS ALAMITOS, Calif. - A suspect is dead hours after he was accused of firing shots at Caltrans workers and California Highway Patrol officers on the 605 Freeway in Los Alamitos on Thursday morning, authorities said.

The gunfire caused temporary freeway closures due to an hours-long standoff as traffic was diverted from the scene. 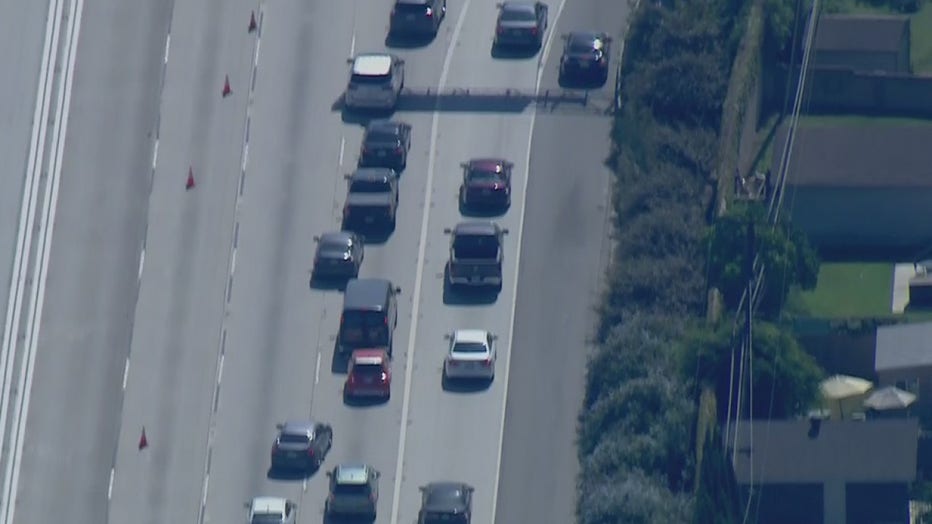 The shooting occurred just after 9:15 a.m., the CHP said.

“We had officers that were assisting Caltrans with a maintenance detail in the area of the Katella onramp to the southbound 405. At some point during that maintenance operation, Caltrans requested CHP units that were working the detail due to a pedestrian that they had come in contact with,” a CHP officer told FOX 11. "Two officers approached and made contact with a male pedestrian in the brush area and at that time, an officer-involved shooting occurred."

Search underway for suspect who fired at police

California Highway Patrol officers and Caltrans workers were fired on Oct. 15 by an apparent transient under the cover of foliage near the southbound Katella Avenue onramp to the 605 Freeway.

It is believed the suspect resided in a tent underneath the onramp.

An officer suffered a minor injury and the details of his injury were not disclosed.

The suspect's death was announced just after 1:15 p.m.

The Orange County District Attorney's office will investigate the shooting.

This is a developing story, check back for updates.