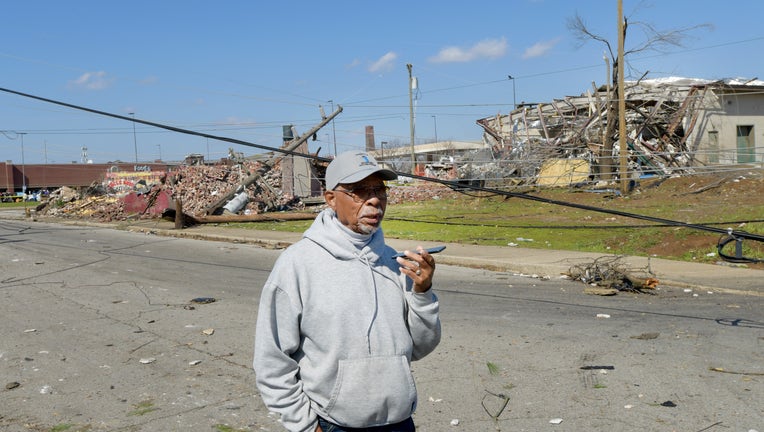 FILE -A resident of the Germantown neighborhood is seen surveying the damage on March 03, 2020 in Nashville, Tennessee. (Photo by Jason Kempin/Getty Images)

A Davidson County Chancery Court judge ruled that polling locations in the county whose seat is Nashville must remain open until 8 p.m. CST.Two so-called megasites, where anyone in the tornado-hit county can go to vote, will be open until 10 p.m. local time under the judge's ruling, Tennessee Democratic Party spokeswoman Emily Cupples said.

The county is Tennessee's second-largest.

Tennessee Democrats and campaigns for Joe Biden, Mike Bloomberg, Bernie Sanders and Elizabeth Warren had sued to extend the hours. Voting locations in Davidson County had opened an hour later — at 8 a.m. local time — after an early morning tornado damaged more than a dozen polling places and voters were advised to go to other locations to cast ballots.

Cupples said some voters showed up at 7 a.m., but their polling locations were not open and they had to leave without being able to vote. Also, some locations opened after 8 a.m. because of storm damage, and those voters were not able to cast ballots either.

Lines were long at some locations that were unprepared for additional voters and people left without casting their ballots, Cupples added.

“This is a victory for all voters and this decision will ensure that everyone has the opportunity to participate in this historic election," said Mary Mancini, chair of the Tennessee Democratic Party, in a statement.

With the extended hours, some 1,500 poll workers who had been counting on going home after polls closed at 7 p.m. will be working much later. Roberts said the average age of poll workers in the county is 66 years old.

“Some of those folks are going to feel a little uncomfortable being out in unfamiliar neighborhoods at that late hour, but we recognize it's important to make sure everyone has an opportunity to vote,” Roberts said.

Poll officers taking voting totals from individual precincts to the central office where the votes will be counted are going to have to use caution as they navigate closed streets, Roberts said.

Tornadoes ripped across downtown Nashville and other parts of Tennessee as families slept early Tuesday, shredding more than 140 buildings and burying people in piles of rubble and wrecked basements. At least 25 people were killed, some in their beds, authorities said.

In east Nashville, the Cleveland Park Community Center had only one voting machine in operation when it began taking in voters whose regular polling locations had no power. At one point, the waiting line was well over 100 people, snaking through a very warm gymnasium.

Jerry Hilton, 86, said it took him about two hours to get through the line at Cleveland Park.

“I was surprised by how patient people were, that people would stand in line without getting upset,” he said.

In Putnam County, tornado damage at polling places led officials to redirect voters to a central site in the county seat of Cookeville, about 80 miles (128 kilometers) east of Nashville.

Jennifer Rollins, 39, said going to vote at the Putnam County Election Commission — the central site — was the one thing residents could do with people being asked to stay off the roads.

Voting there was closer to her home than her usual precinct, she said.

“It’s been a surreal day all around,” Rollins said.