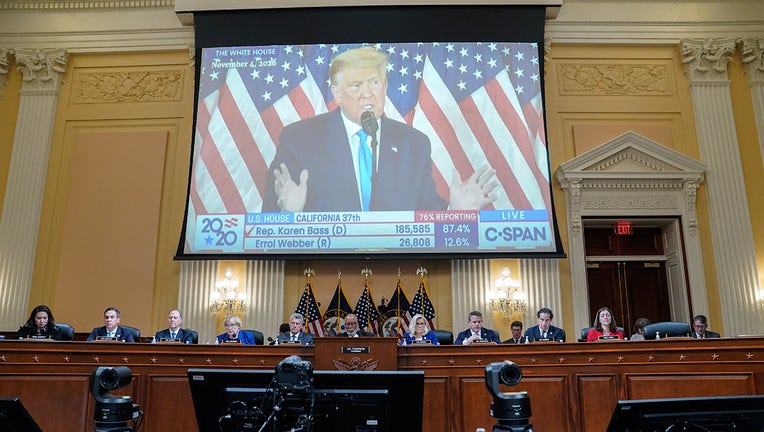 President Donald Trump is seen on the screen as the House select committee investigating the Jan. 6 attack on the U.S. Capitol holds a hearing on Capitol Hill on Thursday, October 13, 2022 in Washington, DC. (Photo by Jabin Botsford/The Washington Po

WASHINGTON - The House Jan. 6 committee on Friday subpoenaed former President Donald Trump – an extraordinary but not unprecedented move as the panel works to wrap up its investigation of the 2021 Capitol insurrection.

The committee is asking Trump to hand over documents by Nov. 4 and provide testimony "on or about" Nov. 14 and possibly longer. While the nine-member panel has already interviewed more than 1,000 people, many of them close to Trump, lawmakers say there are details that only he can confirm.

In a letter accompanying the subpoena, the committee said that Trump personally oversaw a multi-part effort to overturn his 2020 election defeat, that he knew it was illegal and that he knew his claims about the election were false.

What the House Jan. 6 committee wants from Trump:

Texts and other communications

Most of the panel’s 19 requests for information are for text messages, logs of phone calls or other communications. The panel specifically mentions the encrypted messaging app Signal in all but three of the requests, asking Trump for "communications sent through Signal or any other means." The app was frequently used by Trump's aides and allies.

The panel is asking Trump for records of all calls and messages "placed or received by you at your direction," including any conference calls, on Jan. 6, 2021.

Lawmakers are also seeking communications with members of Congress and others in the weeks before the insurrection and on that day, about the 2020 election and the joint session that Trump’s protesters interrupted. The requests include any communications referring to extremist groups who were coming to Washington, pressure on state legislators to overturn the vote and messages about Vice President Mike Pence, whom Trump was pushing to object to President Joe Biden’s victory.

The panel is also requesting communications with a list of key Trump allies, and any "relating or referring in any way to efforts to encourage or summon individuals to travel to Washington, D.C., on Jan. 6, 2021."

Officer Edwards testifies during the first night of hearings for the Jan. 6 insurrection.

The committee is asking Trump to provide any photos and video "relating in any way" to his own Jan. 6 rally, the joint session or the violence at the Capitol.

The Jan. 6 committee has distinguished itself from other congressional investigations with extensive multimedia presentations and its use of video evidence, including raw footage from the insurrection.

The sweeping request to Trump also asks for electronic or handwritten notes or any other documents "memorializing conversations" about the joint session of Congress or the violence. The committee specifically asks Trump to include any notes about his "possible travel to the Capitol that day."

The committee wrote that they want to speak to Trump because of his "central role" in a multi-pronged effort to overturn his defeat.

The letter accompanying the subpoena specifically asks for testimony about his dealings with several of his closest allies, all of whom have asserted their Fifth Amendment rights against self-incrimination to the committee. They include Roger Stone, Michael Flynn, John Eastman, Jeffrey Clark and Kelli Ward — all of whom were in touch with, and sympathetic to, Trump as he tried to overturn Biden’s victory in the election.