Braxton Moral, of Ulysses, graduated from Ulysses High School on Sunday and will graduate with a bachelor's degree from Harvard University on May 30.

ULYSSES, Kan. - A 17-year-old student in Kansas is set to graduate from high school and Harvard University at the same time this month.

Braxton Moral, of Ulysses, graduated from Ulysses High School on Sunday and will graduate with a bachelor's degree from Harvard University on May 30. The student began taking classes at Harvard Extension School when he was just 11 years old.

"The first time we took him to Cambridge, he came up to my wife and I and said, 'I actually fit in here," said Carlos Moral, Braxton's father. "We live in a small town in Kansas, so there were no challenges for him... so this is how he got challenged."

When his son showed that he could do the work, the university admitted him right before his 13th birthday.

"He loves to learn, that's what makes him tick, and he also wants to make a difference for other kids," he said. 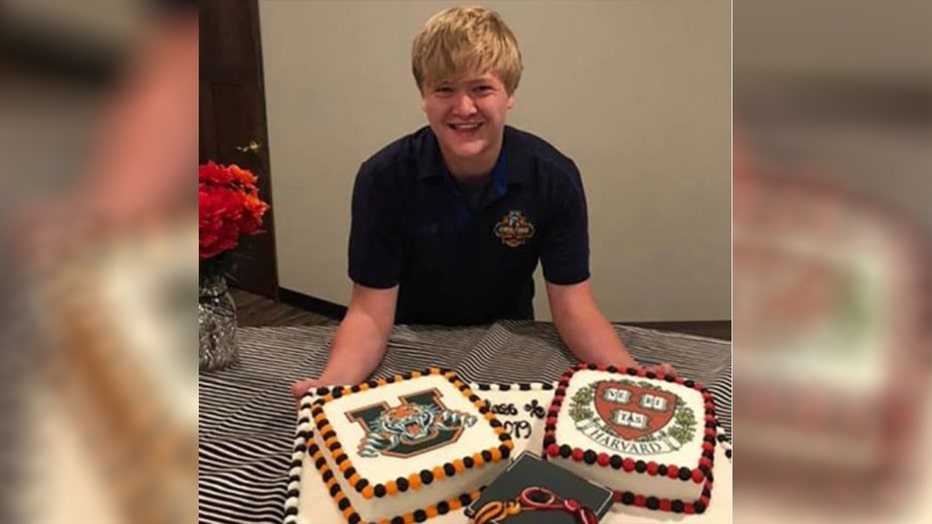 Braxton Moral, 17, graduated from Ulysses High School on Sunday and will graduate with a bachelor's degree from Harvard University on May 30. (Photo: Brittney Jo Seger)

Carlos said his son couldn't have done it without the help of others.

"It's a testament to him and to the people that have helped him along the way. I mean, I think that Harvard Extension School has gone out of their way to accommodate him," Carlos said.

Jarumi Crooks, a pre-admissions counselor, took the time to understand Braxton and gave him a chance, Carlos said.

Most of the time, Braxton took about 16 credit hours per semester from Harvard on top of his high school courses.

"Braxton graduating from both Harvard and Ulysses High School in the same year speaks of Braxton's intellectual abilities as well as his love for the educational process," Paul said. "Where some students would look for the easier route, Braxton looks for the intellectual challenge."

Carlos said the thing that makes him the proudest of his son is that Braxton recognizes how much others have helped him in his academic journey.

Once Harvard administrators realized that he could graduate, they changed the school's rules to include an age requirement and high school diploma to enter the university, so what Braxton did won't happen again, Carlos said.

"I think he realizes that he's very lucky he's gotten the education that he's gotten and that he's also lucky that he's the only one to have been able to do it, but he also thinks that it's a responsibility of his to make sure that other kids across the country understand how he did it and that maybe they can have a chance," Carlos said. "He wants to bring other kids along with him."

Braxton has a passion for the law, politics and government, and he aims to go to law school next. He is in the "reserve group" for Columbia Law School and has narrowed his preferences down to about four law schools.

"He wants to be president," his father said.

Carlos said his son also has a great sense of humor and loves to laugh.