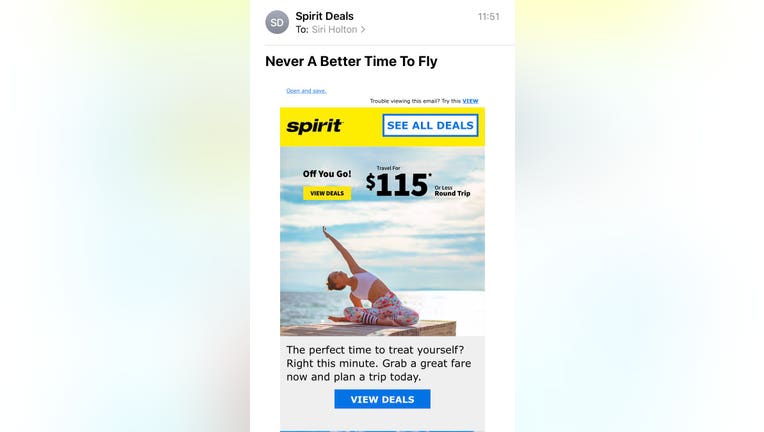 The mass promotional email was reportedly sent on Thursday morning and depicted a woman performing yoga alongside a caption which read, “The perfect time to treat yourself? Right this minute.”

Dozens of people posted screenshots of the email on Twitter expressing distaste for the company’s ill timing.

“Y'all might want to chill with your 'Never a better time to fly' emails," tweeted one user.

Shortly after it was sent, Spirit tweeted a response apologizing for the email, saying that “it was written prior to the current situation and unfortunately sent.”

“We are closely monitoring COVID-19 and taking precautions to keep our Guests & Team Members safe,” added the company.

Following the various global travel bans that have been put into place as well as restrictions for public gatherings in the United States, many people responded to Spirit’s tweet with frustration over not being able to cancel flights because of the virus, citing a lack of available customer service.

RELATED: Flight change fee waivers, cancellations: This is how major airlines are reacting to COVID-19

Many of the world’s largest airlines have been hit hard by the virus, which has forced dozens of flight cancellations.

The International Air Transport Association, an airline trade group, estimates that the outbreak could reduce carriers’ revenue by between $63 billion and $113 billion depending on how far it spreads. The same group said the Sept. 11 terror attacks in 2001, which devastated the U.S. airline industry but had less impact overseas, cut revenue by about $20 billion.