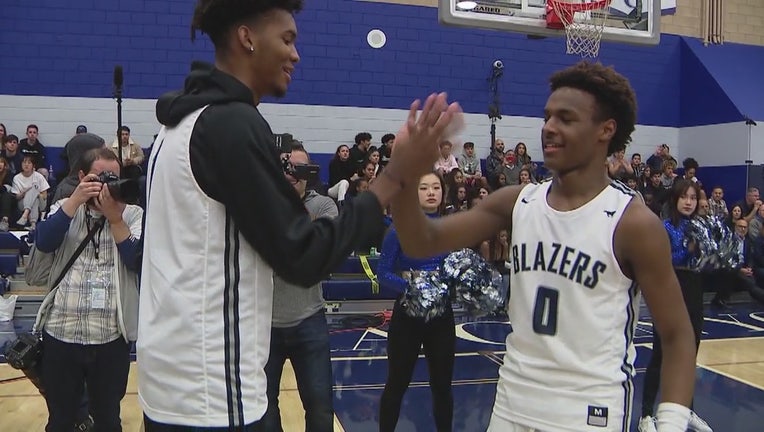 The team remains undefeated at 5-0.

Sierra Canyon High School in Chatsworth hosted its first home game on campus, and it was a sold-out event. A thousand fans jammed inside the high school court to watch the Trailblazers, featuring the sons of LeBron James and former NBA star Dwyane Wade.

Tickets sold out within 32 seconds as fans looked forward to a loaded roster which includes Bronny James, the son of LeBron James, and Zaire Wade, the son of Dwayne Wade.

The Lakers took on the Denver Nuggets in the Mile High City, but LeBron was able to catch his son's home starting debut by streaming the game online.

The Trailblazers, who are defending state champions, were back in California after they played three games at the Thanksgiving Hoopfest in Duncanville, Texas.

Freshman guard Bronny James, who stands at 6 feet and 2 inches tall, was impressive and put on a show. He dropped an alley-oop, a play that was captured by SLAM and was posted to his Twitter account.

Small forward senior Zaire Wade did not play due to an injury.

The basketball powerhouse won 87-35 and were led by BJ Boston, who scored 25 buckets in the matchup.

Boston will take his talents to Kentucky next fall.

MaxPreps currently has the Trailblazers ranked third in the nation and are expected to win their third straight championship title this season.