With the crowd at Madison Square Garden chanting for Daniel the popular golden retriever, judge Bob Slay instead picked Siba the standard poodle for best in show at the Westminster Kennel Club.

NEW YORK - Siba the standard poodle has won best in show at the Westminster Kennel Club.

With the crowd at Madison Square Garden chanting for Daniel the popular golden retriever, judge Bob Slay instead picked the perfectly primped and poised black poodle.

Poodles come in three sizes and this was the 10th time one of them has become America's top dog.

Bourbon the whippet finished second. Also in the best-of-seven final ring was Bono the Havanese, Wilma the boxer, Conrad the Shetland sheepdog, Wilma the boxer and Vinny the wire fox terrier. 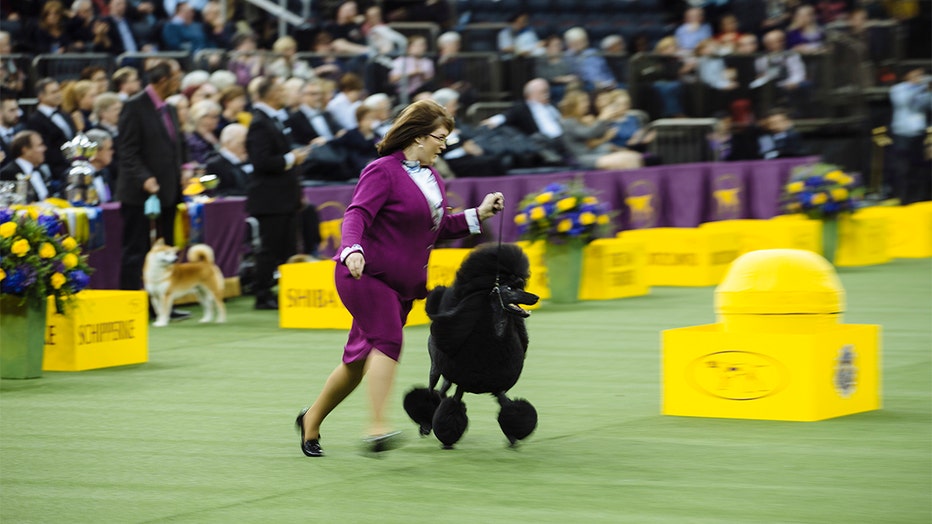 Vinny is the latest in a long line of wire fox terriers to enjoy success at the nation’s premier dog show.

The breed has notched more Westminster best in show wins than any other. A wire fox terrier named King won just last year.

Wilma got to the final round of the Westminster Kennel Club dog show Tuesday night for a second year in a row. Striding with pride to win the working group, Wilma earned a chance to compete for best in show.

The 4-year-old dog from Aubrey, Texas, is named after the character Wilma in "The Flintstones." Her registered name is Cinnibon's Bedrock Bombshell — after Bedrock, the city where the cartoon Flintstones lived.

The working group is an array of often large dogs that historically guarded homes and livestock, pulled sleds and fishing nets, and did other work.

Another dog that got a spin in the working group ring was Titus, a bullmastiff that made a remarkable comeback after being bitten by a snake last March.

For a time, the 3-year-old dog was in danger of losing his back left leg, and he still has a large scar. But he recovered and won his breed at Westminster for the first time Tuesday.

While purebred dogs round the rings at the Westminster Kennel Club dog show, animal-rights activists are also trying to make an impression.

A small group protested Tuesday outside the building where dogs from great Danes to cocker spaniels vied to be named best in their breeds and advance to the competition’s next round.

The protest was the latest in a series of demonstrations that the group People for the Ethical Treatment of Animals has organized at the show over the years.

The demonstrators say it’s callous to breed, buy or sell dogs when shelters are full of canines up for adoption.

“Anyone who visits your local shelter and faces the dogs who are desperately needing homes would understand why PETA is here every year,” said associate director Ashley Byrne.

The protesters also say purebred aficionados are too focused on dogs’ appearance, rather than their health. They point, for example, to breathing difficulties that can beset flat-faced breeds.