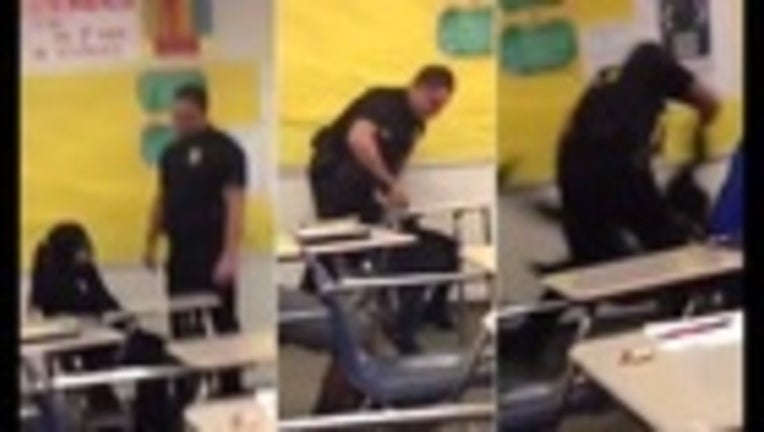 COLUMBIA, S.C. (FOX 11 / AP) - Here are the latest developments in the confrontation between a South Carolina deputy and a student recorded on cellphone video (all times local):

A South Carolina sheriff says he has fired a school officer after video showed him flipping a teen backward out of her desk and tossing her across a classroom.

Lott says the maneuver that Fields used on the student was not based on training or acceptable procedure.

Lott has said the girl was uninjured aside from a rug burn. However, the girl's attorney, Todd Rutherford, told ABC's "Good Morning America" that she "has a cast on her arm, she has neck and back injuries." He says she also has a bandage on her forehead because of the rug burn.

Richland County Sheriff Leon Lott is expected to announce whether he will fire a South Carolina deputy who was recorded on cellphone video tossing a teen from her desk and throwing her across the room at a Columbia high school.

Lott is scheduled to meet with reporters at noon Wednesday to discuss the case involving Master Deputy Ben Fields, a school resource officer at Spring Valley High School. Lott suspended Fields after the teen's arrest was recorded by students.

The girl's lawyer, Todd Rutherford, told ABC's "Good Morning America" on Wednesday that the student suffered arm, neck, back and head injuries during the confrontation.

Authorities had initially said the girl suffered no injuries other than a rug burn.

The lawyer for a teen who was flipped out of her desk and tossed across the room by a school resource officer in South Carolina says his client was injured in the incident.

Todd Rutherford told ABC's "Good Morning America" on Wednesday that the teen has a cast on her arm and suffered neck and back injuries in the confrontation at Spring Valley High School in Columbia on Monday. Rutherford also said the girl suffered a rug burn on her forehead.

Sheriff Leon Lott had said Tuesday that the girl "may have had a rug burn" but otherwise was not injured. Lott is considering whether to fire Senior Deputy Ben Fields because of the confrontation recorded by several students using cellphones.

Rutherford said his client may have struck fields as she reacted to being grabbed by the neck.

A South Carolina sheriff's deputy who flipped a student backward in her desk and tossed her across the floor for refusing to leave math class could learn as soon as Wednesday whether he will be fired.

Richland County Sheriff Leon Lott said once his agency's internal investigation is completed, he will make a decision about whether to keep Senior Deputy Ben Fields on the force.

The videos of the confrontation between a white officer and black girl stirred such outrage that Lott called the FBI and Justice Department for help. A criminal investigation is underway, but the probe generally takes more time.