Miller was working at Providence Mission Hospital when the alleged assaults occurred.

ORANGE COUNTY, Calif. - A woman is speaking out following the arrest of a nurse who is accused of sexually assaulting three patients at a hospital in Mission Viejo.

Miller was working at Providence Mission Hospital when the alleged assaults occurred.

According to the Orange County Sheriff’s Department, in March 2021 a 22-year-old woman reported that she was sexually assaulted by Miller while in the emergency room.

"I was there for injuries from a car accident. I was vulnerable and he took advantage of me. This has been one of the worst experiences of my life and I’m not sure if I’ll ever be the same again," Zoe Cooksy said during a press conference Thursday. 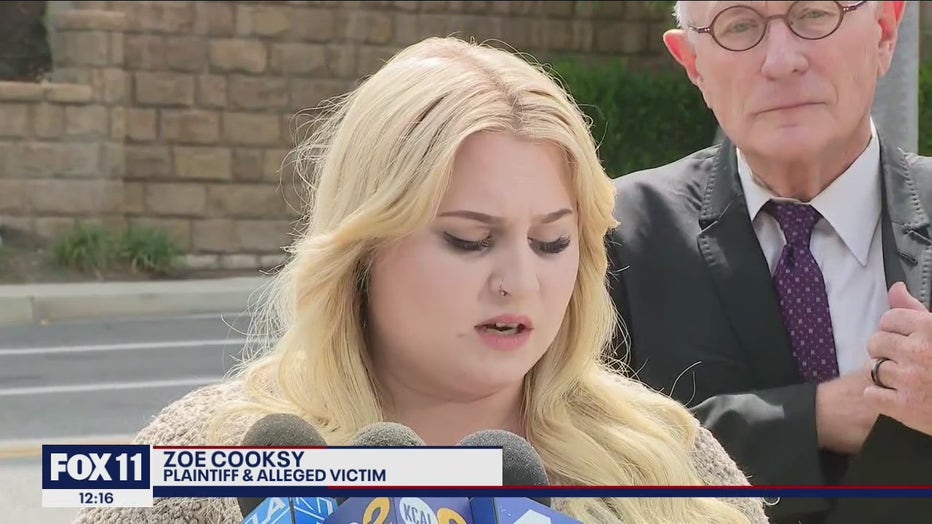 According to her lawsuit, Cooksey and her husband got into a car accident March 28, and the next day she went to the emergency room at Mission Hospital, complaining of abdominal pain and bruising. She says she was given some pain medication and advised to come back if her symptoms did not improve.

When she suffered "bloody stool and acute dizziness,'' she returned to the emergency room on March 31, according to the lawsuit.

Cooksey alleges that Miller asked her four times if she needed help changing into a hospital gown, but she declined each time. Miller allegedly said he would need to insert a catheter, so he removed her underwear and attempted to put in the device "for several minutes,'' the lawsuit alleges.

When Cookey said it was uncomfortable, "Miller rubbed her vagina in a sexual manner and asked if that felt good,'' the lawsuit alleges. She "repeatedly'' told him to stop and asked why what he was doing was necessary, according to her court papers, which say Miller removed the catheter after
several minutes.

Her mother arrived a short time later and Miller then injected morphine into the plaintiff, who was unable to tell her mother what happened because she quickly fell under the effects of the narcotic, according to the lawsuit.

A chest X-ray was done on the patient and then she was taken by another nurse for a CT scan, according to her court papers, which allege Miller asked Cooksey's mother if she wanted to lie down and that he could "give her something to relax,'' but she declined.

Miller gave Cooksey another dose of morphine before she left, according to the lawsuit, which says Miller advised the woman's mother to tell her daughter not to take the pain medication prescribed to her that evening because of the amount of morphine he had given her.

"After months of depression, stress, and anxiety, I am only now able to talk about what happened to me,'' Cooksey said in a statement. "Coming forward today is as much about healing and shedding the secrecy and shame associated with sexual assault as it is about empowering other victims to speak out.

The attacks are alleged to have occurred on March 19, March 31 and April 9, according to court records.

A lawsuit was filed against the hospital and Miller was placed on administrative leave.

"During the pandemic, when we depended most on our first responders, I was completely betrayed by Mission Hospital and Paul Miller,'' Cooksy alleged.

Cooksy's lawsuit alleges that hospital officials were aware of Paul Alden Miller's "propensities toward sexual and narcotic-based misconduct by way of prior incidents of wrongdoing and failed'' to fire him.

Providence Mission Hospital released the following statement saying in part "As soon as hospital leadership received the first patient complaint, the hospital took prompt action and immediately placed the caregiver on administrative leave pending a full investigation.  While the sequence of events reported by O.C. Sheriff may reflect when the incidents occurred, it doesn’t accurately reflect when the incidents were reported to the hospital and therefore when the caregiver was placed on leave. Providence Mission is a trusted health care partner, and is committed to providing high-quality, compassionate and safe care to those we serve. We have a zero tolerance for behavior that does not align with our Mission and values."

Providence is fully cooperating with the police investigation.

"If Paul Miller assaulted you, I invite you to be brave and stand with me and together we will hold him accountable,"Cooksy added.

Miller has been a registered nurse for six years and started working at Providence Mission Hospital in January 2017.

Anyone with information regarding additional victims should contact the Orange County Sheriff’s Department at 714-647-7419. You can remain anonymous by sending a tip to OC Crime Stoppers at 855-TIP-OCCS.