"You have earned this spot, you are worthy. You are a great American," Sen. Cory Booker said during an impassioned speech on Wednesday.

The senators from Alaska and Utah announced their decisions ahead of a procedural vote to advance the nomination and as Democrats pressed to confirm Jackson by the end of the week. GOP Sen. Susan Collins of Maine announced last week that she would back Jackson.

All three Republicans said they did not expect to agree with all of Jackson's decisions, but that they found her well qualified. Romney said she "more than meets the standard of excellence and integrity."

With three Republicans supporting her in the 50-50 split Senate, Jackson is on a glidepath to confirmation and on the brink of making history as the third Black justice and only the sixth woman in the court’s more than 200-year history. Beyond the historic element, Democrats have cited her deep experience in nine years on the federal bench and the chance for her to become the first former public defender on the court.

Both Collins and Murkowski said they believed that the Senate nomination process has become broken as it has become more partisan in the past several decades.

Murkowski said her decision partly rests "on my rejection of the corrosive politicization of the review process for Supreme Court nominees, which, on both sides of the aisle, is growing worse and more detached from reality by the year."

The Senate's 53-47 vote Monday evening was to "discharge" Jackson's nomination from the Senate Judiciary Committee after the panel deadlocked, 11-11, on whether to send the nomination to the Senate floor.

The committee vote, split along party lines, was the first deadlock on a Supreme Court nomination in three decades.

Earlier on Monday, Biden urged senators to support her in a tweet as the committee meeting began.

"Judge Jackson will bring extraordinary qualifications, deep experience and intellect, and a rigorous judicial record to the Supreme Court," Biden tweeted. "She deserves to be confirmed as the next justice." 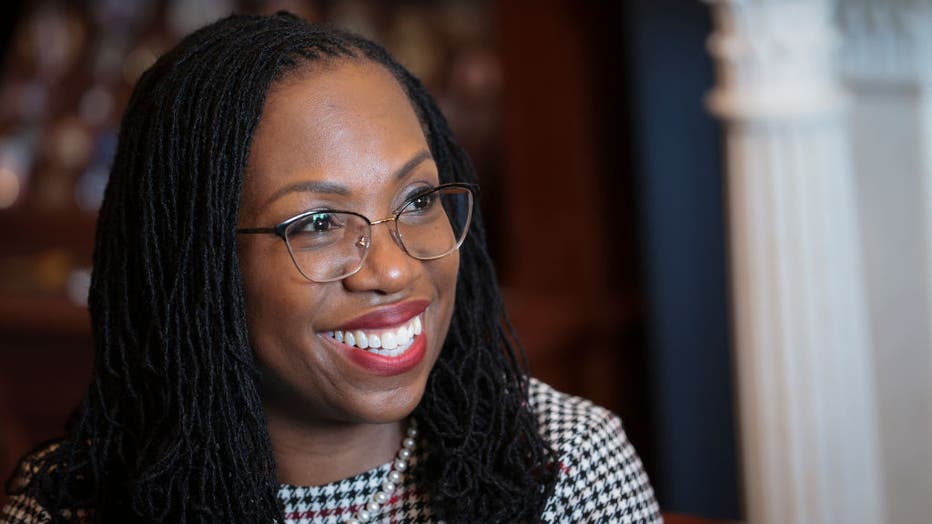 Jackson previously faced more than 30 hours of hearings and interrogation over her record last month. Democrats — and at least one Republican — have cited her deep experience in her nine years on the federal bench and the chance for her to become the first former public defender on the court.

The chairman of the Judiciary Committee, Sen. Dick Durbin, D-Ill., said as he opened Monday’s meeting that Jackson has "the highest level of skill, integrity, civility and grace."

"This committee’s action today in nothing less than making history," Durbin said. "I’m honored to be a part of it. I will strongly and proudly support Judge Jackson’s nomination."

The Senate panel’s top Republican, Iowa Sen. Chuck Grassley, said he was opposing Jackson’s nomination because "she and I have fundamental, different views on the role of judges and the role that they should play in our system of government."

Republican Sen. Lindsey Graham also said he wouldn’t vote for Jackson, expressing concerns about her record despite supporting her confirmation as an appeals court judge last year. The South Carolina senator’s announcement had been expected after he criticized Jackson during her four days of confirmation hearings.

In a speech on the Senate floor, Graham said his decision was based partly on what he sees as a "flawed sentencing methodology regarding child pornography cases," echoing a line of questioning by some Republicans on the Senate Judiciary Committee. Several senators, some eyeing a run for president, repeatedly asked her about her sentencing decisions in her nine years as a federal judge in an effort to paint her as too lenient on sex criminals.

It was unclear so far whether any other Republicans would join Collins. Senate Republican leader Mitch McConnell of Kentucky set the tone for the party last week when he said he "cannot and will not" support Jackson, citing GOP concerns raised in the hearing about her sentencing record and her support from liberal advocacy groups.

Republicans on the Judiciary panel continued their push Monday to paint Jackson as soft on crime, defending their repeated questions about her sentencing on sex crimes.

"Questions are not attacks," said Marsha Blackburn of Tennessee, one of several GOP senators on the panel who hammered the point in the hearings two weeks ago.

Jackson pushed back at that time, declaring that "nothing could be further from the truth."

Senator Lindsey Graham used his time during his opening statement to draw comparisons between the treatment of Ketanji Brown Jackson versus Brett Kavanaugh. Jackson currently sits on the D.C. Circuit Court of Appeals, where Biden nominated her less than a year ago to take the seat of Attorney General Merrick Garland. She was the most high-profile choice among Biden's first round of judicial nominations.

Legal experts praised Judge Ketanji Brown Jackson in her final day of Senate hearings, with a top lawyers' group saying its review found she has a "sterling" reputation, "exceptional" competence and is well qualified to sit on the Supreme Court.

Democrats are hoping to win bipartisan votes for President Joe Biden's historic nominee, but Republicans have portrayed Jackson as soft on crime in her nine years on the federal bench. Jackson, supported by committee Democrats, pushed back on that GOP narrative in more than 22 hours of questioning, explaining the sentencing process in detail and telling them: "nothing could be further from the truth."

Jackson, 51, declared she would rule "from a position of neutrality" on the high court during the second day of confirmation hearings before the Senate Judiciary Committee. The hearings included Republican suggestions that she has given light sentences to child pornographers.

Durbin, the Judiciary Committee chairman who preemptively brought up concerns previously raised by Sen. Josh Hawley, R-Mo., Jackson pushed back on the notion that her rulings could have endangered children.

"As a mother and a judge who has had to deal with these cases, I was thinking that nothing could be further from the truth," Jackson said, calling it "some of the most difficult cases that a judge has to deal with."

She described looking into the eyes of defendants and explaining the lifelong effects on victims. It is "is important to me to represent that the children’s voices are represented," she said.

Judge Ketanji Brown Jackson was confirmed in 2021 to the D.C.-based appellate court as a U.S. Circuit Judge, a position Biden elevated her to from her previous job as a federal trial court judge. Three current justices — Thomas, Kavanaugh and John Roberts, the chief justice — previously served on the same appeals court.

Jackson was confirmed to the appeals court by a 53-44 vote in June 2021, winning the backing of three Republicans: Graham, Collins and Alaska’s Lisa Murkowski.

RELATED: Ketanji Brown Jackson to be nominated for Supreme Court

Jackson was born in Washington, D.C., but grew up in Miami. She has said that her parents, Johnny and Ellery Brown, chose her name to express their pride in her family’s African ancestry. They asked an aunt who was in the Peace Corps in Africa at the time to send a list of African girls’ names and they picked Ketanji Onyika, which they were told meant "lovely one."

She traces her interest in the law to when she was in preschool and her father was in law school and they would sit together at the dining room table, she with coloring books and he with law books. Her father became an attorney for the county school board and her mom was a high school principal. She has a brother who is nine years younger who served in the Army, including in Iraq, and is now a lawyer.

In high school, she was the president of her public high school class and a debate champion. Richard B. Rosenthal, a lawyer who has known her since junior high, said there was no question she would rise to the top of whatever field she chose, describing her as "destined for greatness." His older brother, Stephen F. Rosenthal, a classmate and friend from Miami who also went to college and law school with her, called her a "natural leader" and someone with "penetrating intelligence."

Jackson attended Harvard, where she studied government but also was involved in drama and musical theater and part of an improv group called On Thin Ice. At one point she was assigned actor Matt Damon as a drama class partner, she has said, acknowledging he probably wouldn’t remember her. He does not, Damon previously confirmed through a representative, but added: "That’s so cool!"

Also at Harvard, she met her husband, who is a surgeon at Georgetown University Hospital, and the couple has two daughters.

From 1999 to 2000, Jackson was a law clerk for Breyer on the Supreme Court. Deborah Pearlstein, a law clerk to Justice John Paul Stevens the same year Jackson worked for Breyer, recalled Jackson as funny, insightful and "incredibly good at her job."

"I don’t know anybody there at the time who didn’t get along with Ketanji," Pearlstein said.

Jackson has since worked for large law firms over the course of her career but also was a public defender. After she was nominated to serve on the U.S. Sentencing Commission, the agency that develops federal sentencing policy, she taught herself to knit to deal with the stress of the nomination and confirmation process, she has said.

As a commissioner, she was part of a unanimous vote to allow thousands of people already in federal prison for crack-related crimes get their sentences reduced as a result of a new law.

And Jackson’s work on the Sentencing Commission paved the way for her to become a federal trial court judge, where one of the things she displayed in her office was a copy of a famous, handwritten petition to the Supreme Court from a Florida prisoner, Clarence Gideon. The Supreme Court took his case and issued a landmark decision guaranteeing a lawyer for criminal defendants who are too poor to afford one.

Jackson had served as a federal trial court judge since 2013, nominated by former President Barack Obama.

Jackson is currently a member of the Judicial Conference Committee on Defender Services, as well as the Board of Overseers of Harvard University and the Council of the American Law Institute. She also currently serves on the board of Georgetown Day School and the United States Supreme Court Fellows Commission.