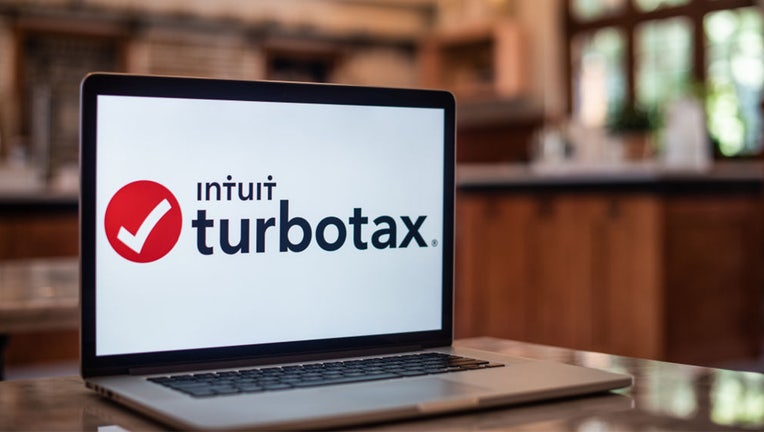 The TurboTax logo on a laptop computer in an arranged photograph. (Tiffany Hagler-Geard/Bloomberg via Getty Images)

Sen. Elizabeth Warren, D-Mass., along with Rep. Katie Porter, D-Calif., and Rep. Brad Sherman, D-Calif., have sent a letter to Intuit, the maker of TurboTax, and pushed the company for answers about the alleged "deceptive advertisements of its ‘bogus’ free tax preparation products," according to the letter sent on April 18.

The letter also accused Intuit of its "unethical use of the revolving door to hire former regulators to defend its shady business practices that scam taxpayers out of billions of dollars."

"Given this new revelation and Intuit’s track record of lobbying to protect its shady business practices, we seek to understand the extent to which Intuit has used former government officials to defend and maintain its unethical and potentially illegal practices that cost American taxpayers billions of dollars," the letter continued.

Warren, citing the Federal Trade Commission’s (FTC) lawsuit against Intuit filed in March, alleged that TurboTax’s Free File program scammed taxpayers into paying for services that should have been free.

"Free File was supposed to cover 70% of American taxpayers, but as of 2018, only approximately 3% of taxpayers participated each year," the letter read.

Intuit told FOX TV Stations in an emailed statement it is working to respond to the lawmakers’ letter.

"Intuit strongly believes that Americans should be at the center of their financial life and is proud to have helped more taxpayers file their taxes for free than all our competitors combined. Over the past eight years alone, Intuit’s free tax preparation offering has helped nearly 100 million Americans file their taxes completely free of charge. We are clear and fair with our customers and open and transparent about our advertising practices, and our participation in the Free File program was done in compliance and with the oversight of the IRS. We are reviewing the letter from Sen. Warren and other policymakers and will respond," a company spokesperson said.

Meanwhile, the FTC said in March that millions of consumers could not actually use the free tax-prep software option — two-thirds of tax filers in 2020. They are ineligible, the agency said, if they are gig workers or earn farm income, for example.

"TurboTax is bombarding consumers with ads for ‘free’ tax filing services, and then hitting them with charges when it’s time to file," said Samuel Levine, Director of the Bureau of Consumer Protection, in a statement. "We are asking a court to immediately halt this bait-and-switch, and to protect taxpayers at the peak of filing season."

The agency said Intuit has for years focused on the word "free" in its ads, running them during major events like the Super Bowl. The FTC has asked a federal judge to order Intuit to stop what it said were Intuit’s deceptive ads during the rush of tax season. This year’s tax filing deadline is April 18.

The FTC voted 3-1 in favor of filing the suit. The FTC complaint was filed in U.S. District Court in Northern California.

Intuit, based in Mountain View, California, said in a statement that it would challenge the lawsuit.

"Far from steering taxpayers away from free tax preparation offerings, our free advertising campaigns have led to more Americans filing their taxes for free than ever before and have been central to raising awareness of free tax prep," said Kerry McLean, executive vice president and general counsel of Intuit. McLean said nearly 100 million Americans have filed taxes for free over the past eight years using TurboTax.

Intuit said it had removed ads that the FTC said were deceptive after meeting with FTC Chair Lina Khan. The company said it informed the agency on March 24 that "it would voluntarily ‘pull down the ‘free, free, free’ TV ads for the remainder of the tax season' in response to concerns that those advertisements were deceptive."

Intuit offered a free version of TurboTax through the IRS’ Free File Program for low-income filers until 2021, when they quit the program, saying they wanted to "focus on further innovating in ways not allowable under the current Free File guidelines."

The Free File system, a partnership between the tax industry and the IRS, was designed to help low- and middle-income taxpayers file online, but it has long faced criticism of being too little supported. ProPublica has reported on efforts by the tax prep industry to nudge consumers into using paid products.