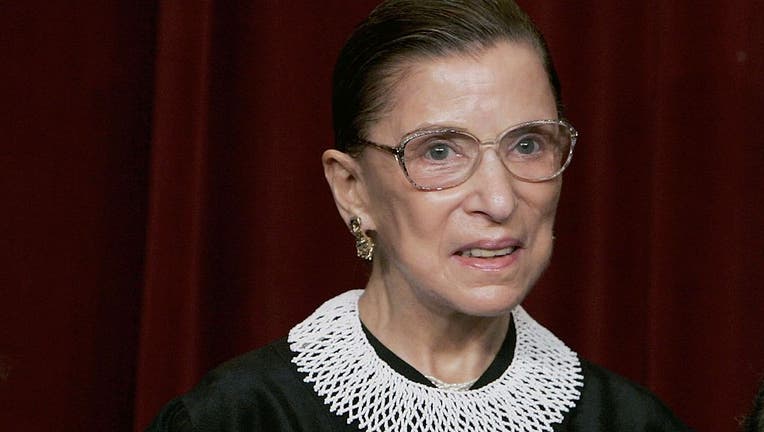 The monument, designed by artist Saya Woolfalk, includes "special details about (Ginsburg's) journey as a law student at Harvard, recognizing her most treasured belongings and demonstrates her passion for the law," according to the motion to install the monument, introduced by Council President Nury Martinez.

The monument will feature a stainless steel roof and mosaic tile floor based upon two of the collars that Ginsburg was known to wear with her judicial robes. The collars will be connected by columns turned on their side. The monument will also feature benches based on the Harvard Law School desks, so it can be used as a space for reflection, as well as stainless steel doors with an etching of Ginsburg's likeness.

"One of the door panels is slightly ajar, and ready to be pushed open by the next generation of women who are working towards equal rights," the motion stated.

Officials hope the monument will become a pilgrimage for women and a location where they can contemplate women's contributions to humankind.

"Throughout history, women's contributions and discoveries have been overlooked, forgotten and hijacked. This inequality is evident in our public spaces, where real accomplished women are frequently missing," stated the motion, which was seconded by Councilwomen Monica Rodriguez and Nithya Raman.

Hulu commissioned the monument, as well as one in Atlanta that honors Coretta Scott King and one in Miami that honors Everglades conservationist Marjory Stoneman Douglas. Hulu approached Los Angeles with the idea to build the monument honoring Ginsburg.

"The impact that Ginsburg had upon women's equality is simply incalculable, and her legacy will inspire people for many generations to come," the motion said.

Ginsburg, who was appointed by President Bill Clinton, served on the U.S. Supreme Court from 1993 until her death on Sept. 18, 2020.