Miami-Dade Fire Chief Alan Cominsky said rescuers heard the voice of a woman during initial search and rescue efforts after the collapse as they sifted through the debris, but were ultimately unable to find her.

SURFSIDE, Fla. - Emergency workers heard the voice of a woman trapped under the rubble of the South Florida condo collapse hours after the disaster, officials said -- but they were unable to find her.

During Thursday morning's press conference, Miami-Dade Fire Chief Alan Cominsky said rescuers heard the voice of a woman during initial search and rescue efforts after the collapse as they sifted through the debris, but were ultimately unable to locate her.

"Unfortunately during our initial search and rescue efforts while we were working underneath the structure, the same structure that's significantly compromised right now, we did hear audible sounds," Cominsky said.

"They were searching for a female voice [which] is what we heard for several hours," he continued. "Eventually we didn't hear a voice anymore."

Cominsky said he wanted to emphasize the "magnitude" of what rescuers were going through, and how they were trying to do the best they could.

"Unfortunately we didn't have success with that," he concluded. 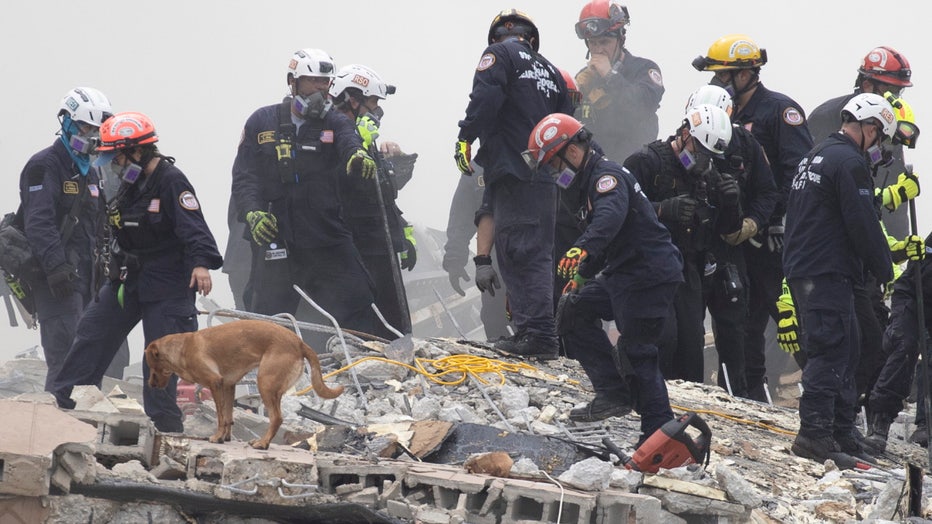 Members of the South Florida Urban Search and Rescue team look for possible survivors in the partially collapsed 12-story Champlain Towers South condo building on June 25, 2021 in Surfside, Florida. Over one hundred people are being reported as missi

The fire chief told the story after a local news outlet reported that search and rescue teams heard banging and a woman pleading for rescue hours after the collapse.

A rescue worker, who asked to remain anonymous, told WPLG that the woman was trapped in a lower level of the condo that ended up inside the parking garage.

RELATED: Biden says federal government will 'pick up 100% of the cost' for first 30 days of Surfside search and rescue efforts

"Everybody that was there, that’s what we’re trying to do, get this lady out and comfort her," the worker said. "She was asking for help and she was pleading to be taken out of there."

He told the outlet that though they never made visual contact, they tried verbally reassuring her that they were going to get her out of there -- but said a wall of concrete, metal rebar and a dumpster were in their way.

President Biden delivered remarks after speaking with the families of those missing in the Surfside condo collapse.

The worker told WPLG that crews never abandoned their effort to free the trapped woman, and communicated with her for "about 10 to 11 hours after the collapse." He said she told them her parents were also trapped next to her.

But when a fire broke out and forced the crews to move back, "we know she passed," he told the outlet.

RELATED: Death toll rises to 18 after bodies of 2 girls found in rubble of Surfside condo collapse

An email sent by a supervisor that was obtained by the TV station worried about the effect the loss of the woman would have on the crew, noting that after her death, chiefs on scene "saw the wind knocked out of our guys."

WPLG did not say if the woman has been identified in the official death toll thus far.