A report says the mistress Van Taylor was involved with is a former jihadist who was living in North Texas and met Taylor when she wanted to get involved in helping fight Islamic extremism.

PLANO, Texas - U.S. Rep. Van Taylor from Plano abandoned his re-election campaign on Wednesday after admitting to an affair.

A report says the mistress Taylor was involved with is a former jihadist who was living in North Texas and met Taylor when she wanted to get involved in helping fight Islamic extremism.

The announcement came hours after the two-term congressman was forced into a runoff with former Collin County Judge Keith Self in the Republican primary for the Collin County-based U.S. House seat.

Taylor was already on the hot seat down the final stretch of his bid for re-election. He voted to certify the 2020 election results and supported a proposed independent commission to investigate the January 6 riot, which was never formed.

The House speaker later formed a select committee to investigate the attack, which Taylor did not support. Still, his republican opponents pounced, claiming he betrayed the district.

Hours after Taylor failed to get enough votes to become the party nominee for Texas' Third Congressional District, he emailed supporters announcing the suspension of his campaign.

"About a year ago, I made a horrible mistake that has caused deep hurt and pain among those I love most in this world," Taylor said in the email. "I had an affair, it was wrong, and it was the greatest failure of my life. I want to apologize for the pain I have caused with my indiscretion, most of all to my wife Anne and our three daughters."

The Dallas Morning News was the first local outlet to detail the ramifications of the affair on the outcome of Tuesday's primary.

A story alleging the affair became public in right wing media outlets on Monday, the day before the primary but after early voting had concluded. Breitbart News said the affair involved a payoff of several thousand dollars to a Plano woman, Tania Joya, a former jihadist previously married to an Islamic State commander. Some tabloids and media outlets have referred to her as the ‘ISIS bride’ or ‘First Lady of ISIS’. The report says they met when she became interested in a program to prevent Islamic extremism.

FOX4 has not independently confirmed the details of the affair.

Staffers for Taylor would not do any on-camera interviews but said he plans to serve the remainder of his term in D.C. and that his name will not appear on the May runoff ballot, giving the Republican nomination to Former Collin County Judge Keith Self.

Taylor’s message says he let Self know he's out of the race.

Self released a statement saying in part, "Conservatives who believe family values are the backbone of our nation are held to a high standard. Congressman Van Taylor has decided to suspend his campaign, and it is appropriate to respect his decision."

Taylor has until mid-March to officially submit the request to remove his name from the runoff ballot.

Before the recent controversy, Taylor fell 823 votes shy of avoiding a runoff. Self will be the Republican nominee for the District 3 seat. 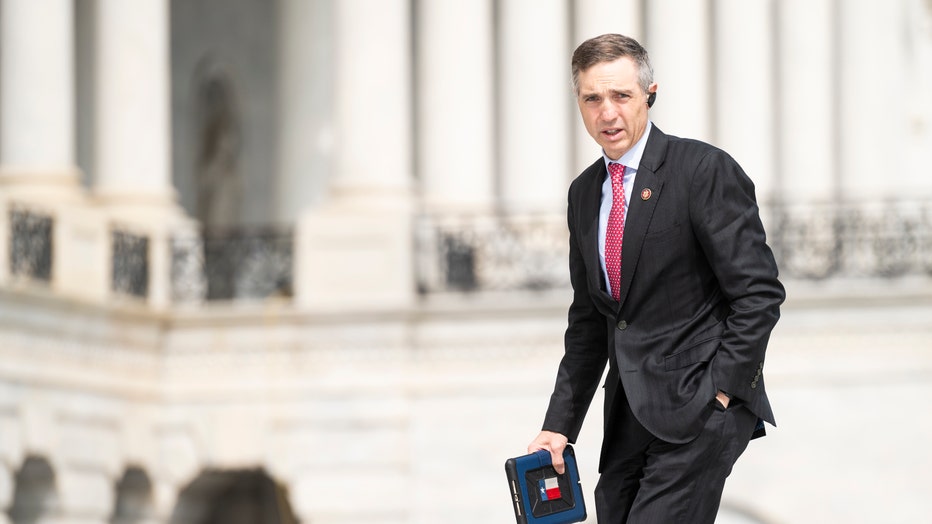 UNITED STATES - SEPTEMBER 15: Rep. Van Taylor, R-Texas, walks up the House steps for a vote in the Capitol on Tuesday, Sept. 15, 2020. (Photo By Bill Clark/CQ-Roll Call, Inc via Getty Images)