Demonstrators have stopped new housing construction at Berkeley's People's Park after they faced off with police on Wednesday. UC Berkeley recently received clearance to build student housing on the historic landmark where many homeless people reside.

BERKELEY, Calif. - Police in Berkeley cleared out People's Park early Wednesday morning, in a long dispute over the historic grounds. But, the tumult escalated as protesters struggled against police in riot gear.

Officers set up barricades, while heavy-duty machinery and construction vehicles came to excavate the area. Cars in the area were moved to a different parking lot with gift card reimbursements of $100.

As crews began cutting down the trees, protestors began pushing against the fencing on the perimeter.

Elisa Smith and her son Stormy Adams were in tears.

"He marked this redwood that my grandma and my mom and her family planted here," said Adams. 'There was a totally feeling of helplessness not just for this tree, but everything."

"To see these being crashed down around us was devastating. I was screaming. I was crying," said Smith, "We have roots. That's what these trees are they are our roots."

An Alameda County Superior Court judge ruled last Friday that the University of California could begin in its long-planned project to build student housing.

The project calls for below-market housing for some 1,100 students on less than half of the 2.8-acre site.

University of California Berkeley officials say they are on a tight construction schedule for student housing at People's Park. Demonstrators showed up in force and even managed to pause construction on Wednesday when they clashed with police.

Police in Berkeley cleared out People's Park early Wednesday morning, in a long dispute over the historic grounds.

Protesters came out before dawn to yell, "this is People's Park!"

A student named Yao said he witnessed police moving unhoused people to a parking lot, while he and his friends tried to make sure that everyone was safe.

Throughout the day, police in riot gear pushed back on protesters trying to enter a locked gate to the park. Tensions remain high, and there were said to be several arrests.

Cal spokesman Dan Mogulof told KTVU that the university is not callous to the plight of the homeless: In fact, UC Berkeley has spent close to $8 million on helping the unhoused, including offering them transitional housing and a new daytime drop-in center.

"We provide fewer beds for students than any of the student campuses and we want this dorm to be open and ready to roll two years from now. That is a tight construction schedule," said Mogulof.

Mogulof said the project will end up preserving more than 60% of the park's "revitalized green space," which will include a memorial to the park's past and historic significance.

Protest erupted after People's Park was cleared out early Wednesday morning to prepare for the construction of housing.

Throughout the day, many students and residents voiced their opinions.

"I think that it’s really unjust what the university is doing trying to build housing here but at the cost of moving out all of these residents," said UC Berkeley student Sarah Hager. "You’re causing significant amounts of harm by moving residents who have lived here forever and are absolutely integrated into the community."

"I think obviously tensions are high today and I fully believe people should be allowed to exercise their first amendment rights and come out here and protest this decision," said Nathan Mizell of Berkeley.

People's Park is listed on the national register of historic places and was an epicenter for protests against the Vietnam War, and for civil rights in the late 1960s. There were petitions by a handful of groups to stop the project, including the Historic District Advocacy Group.

However, in recent years, unhoused people had taken over the area and used it as an urban camping site.

"This is the People’s Park. My mother was here in 1970 when they put up this fence and they knocked it down and this has been our park for 50 years!" said Naya Rose, a UC Berkeley student. "I was trying to get a medic and they sent me to the medic and then they just pushed me down to the ground. Our hearts are breaking right now. People have lost their lives defending this park and what’s happening today is wrong. This is wrong."

Others said there are several other locations where the housing could be built without facing community opposition.

Wednesday afternoon, the city's mayor said the city has relocated unhoused residents who used to take up People's Park for shelter.

"Instead of pushing the unhoused from one neighborhood to another, we've put a roof over the head of nearly every individual living in People’s Park, and working with faith leaders we've developed a daytime respite center for those in need," said Mayor Jesse Arreguin. "In addition, we are providing needed student housing and public open space. While not every member of our community shares these goals, I'm deeply appreciative of all the partners that came together to make this happen."

Mogulof said two or three unhoused people refused all alternative shelter they were offered. He also said students want the dorms on a 2 to 1 margin.

At around 5 p.m., protesters marched from Sproul Plaza on campus to People's Park. Some said they plan to stay overnight and will wait for construction crews to arrive once again in the morning. After the rally, protesters lifted some fallen trees and used them as a makeshift barrier around the park's perimeter.

University representatives said there is a plan in place if protesters try to stop construction on Thursday. They were not specific as to what those plans were.

People's Park protestors moved downed trees to form a blockade around a perimeter Wednesday evening. Protesters clashed with police as UC Berkeley moved to clear the park of homeless residents in order to build student housing.

Over protests, police clear out historic People's Park in Berkeley 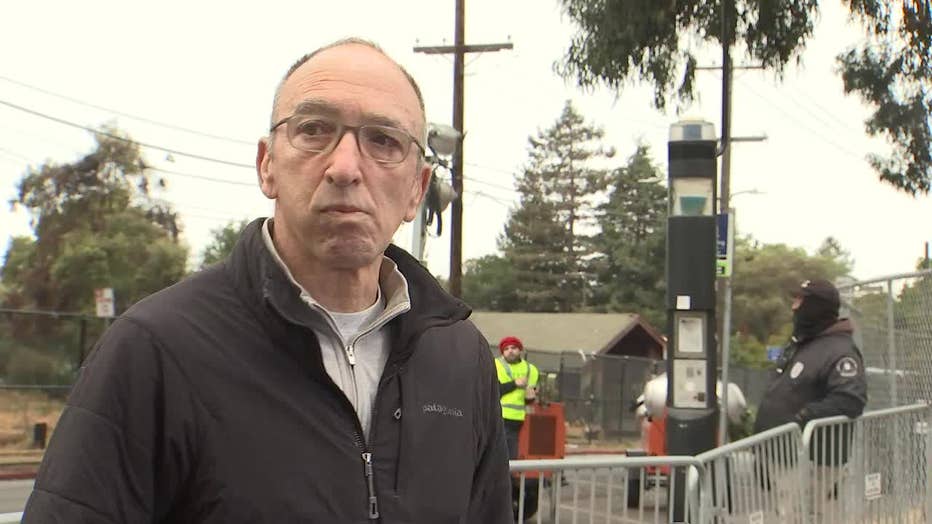 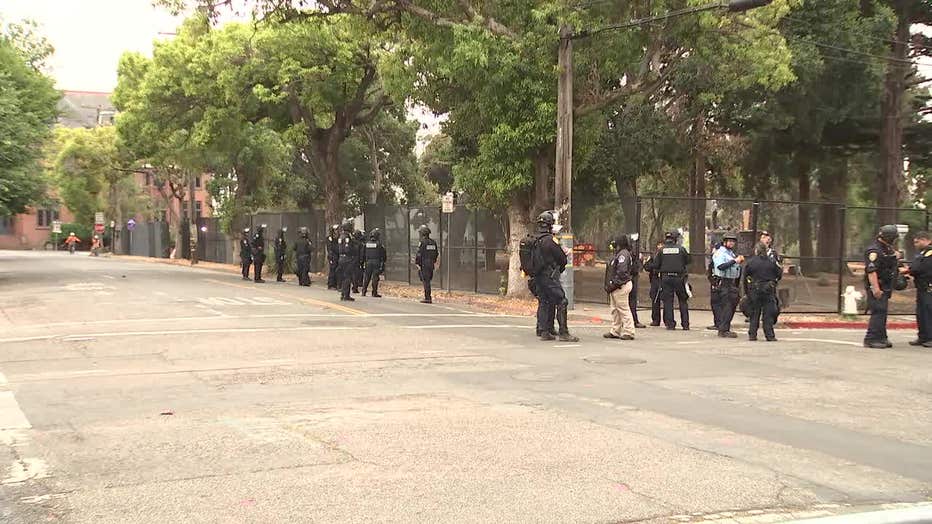 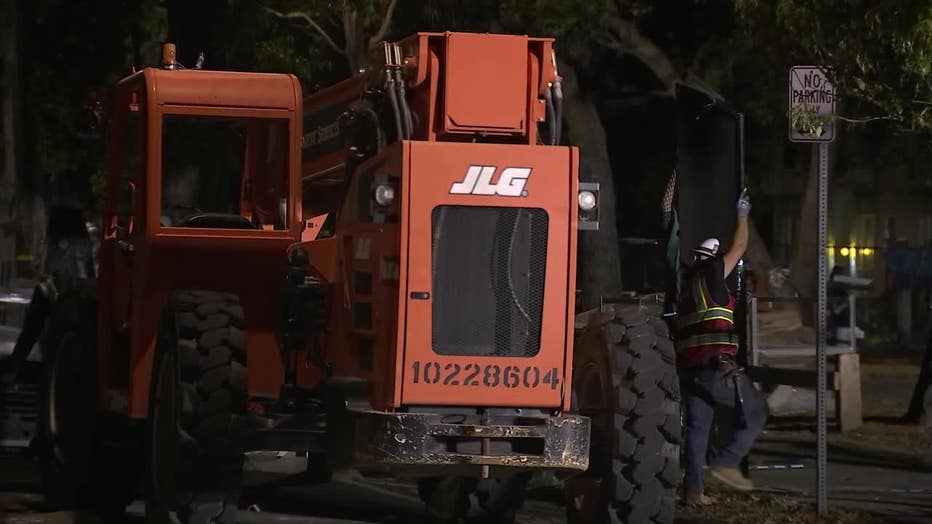 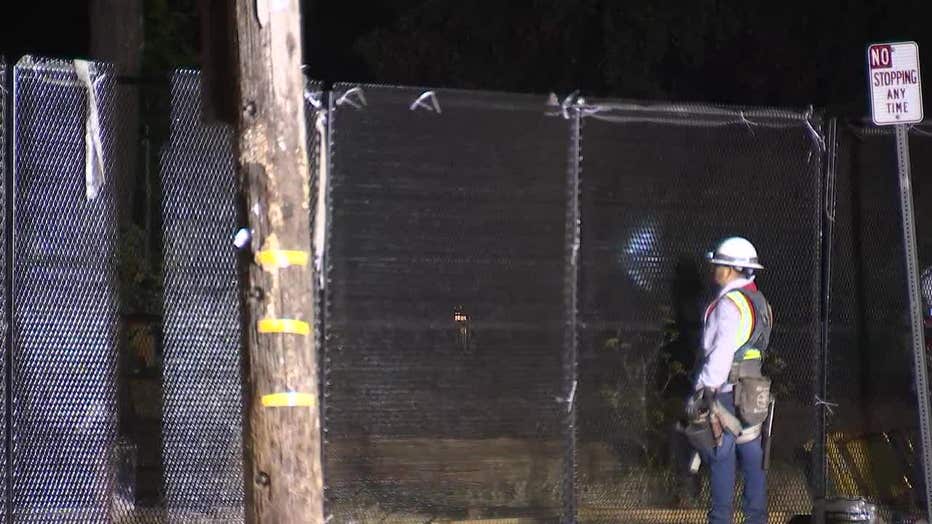 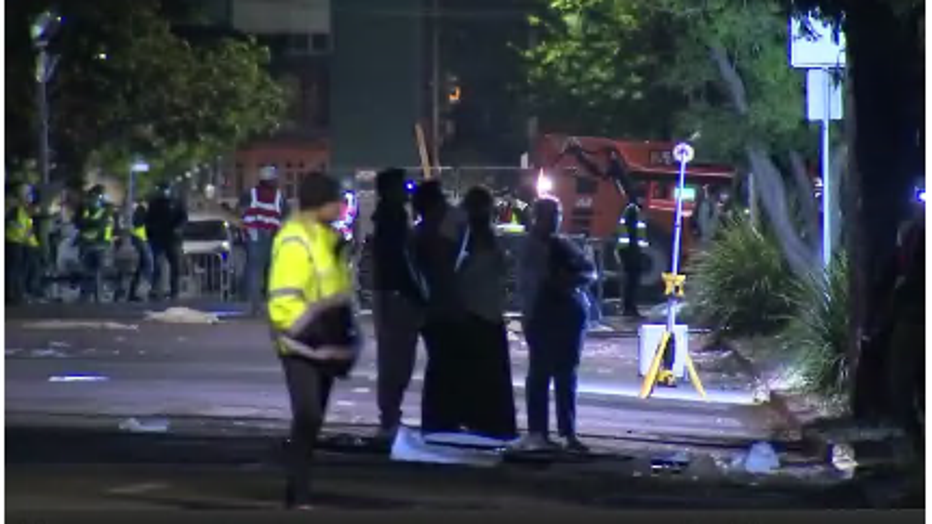 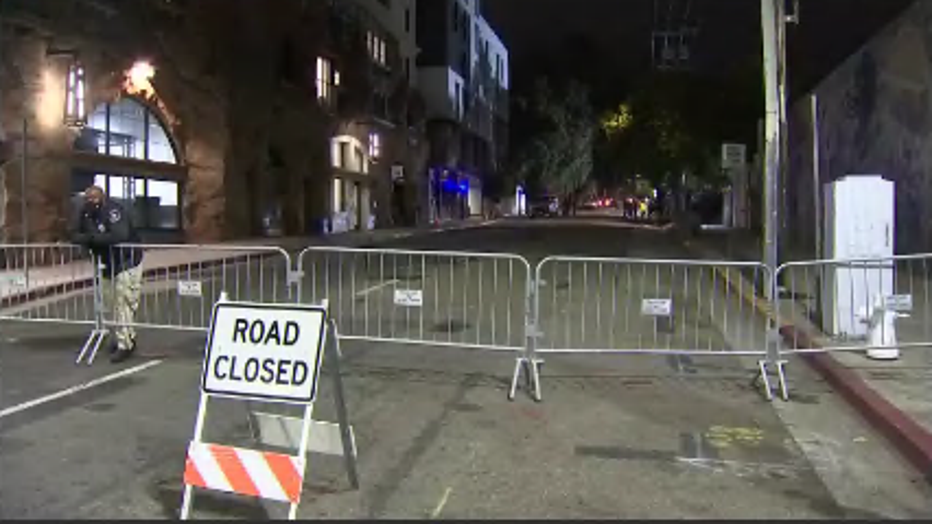 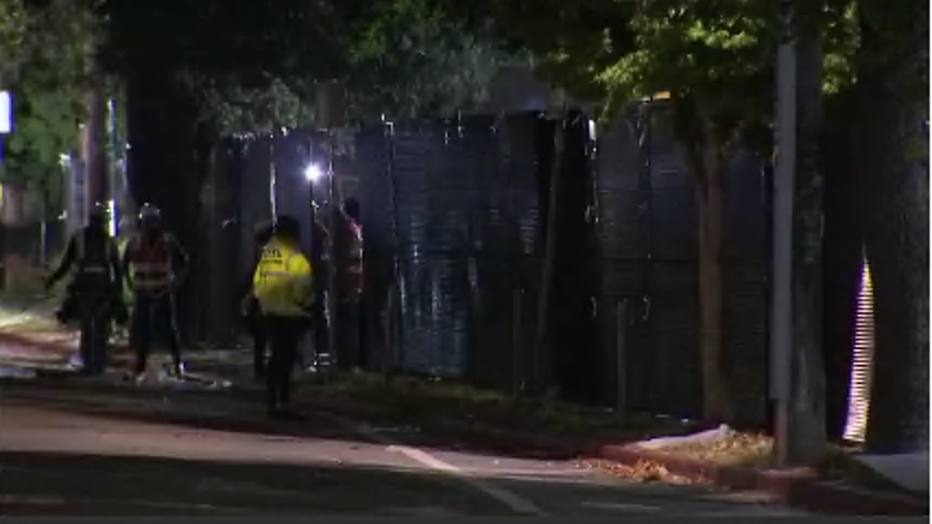