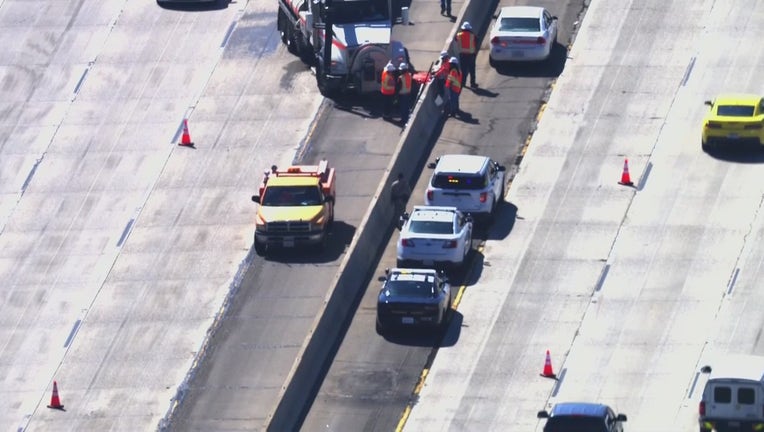 ORANGE COUNTY, Calif. - A blocked pipe at the 55 Freeway at Baker Street in Costa Mesa may have human remains in it, officials said Tuesday as efforts were underway to clear the pipe.

Caltrans and California Highway Patrol officials became aware of the blockage at Baker Street on Monday and requested that Orange County Sheriff's Department's coroner's officials were on hand when the pipe was flushed Tuesday, according to Orange County sheriff's Sgt. Scott Steinle.

Work on clearing the obstruction began at 8 a.m., Steinle said. Until the blockage is cleared authorities will not be certain whether it is human remains, he added.

A Caltrans crew inspecting a culvert with a robotic camera spotted what appeared to be a skeleton at about 9:30 a.m., according to CHP Officer Anselmo Templado.

The coroner and a Caltrans supervisor came up with a plan to extricate the remains by flushing the pipe with water, but they ran into a problem with debris stuck in the pipe, Templado said. A vacuum was being used to suck out the debris, Templado said.

Access to the pipe is about 26 inches wide so it's possible that a person could have climbed in, but the pipe narrows.

Templado said there was no evidence so far of any foul play.