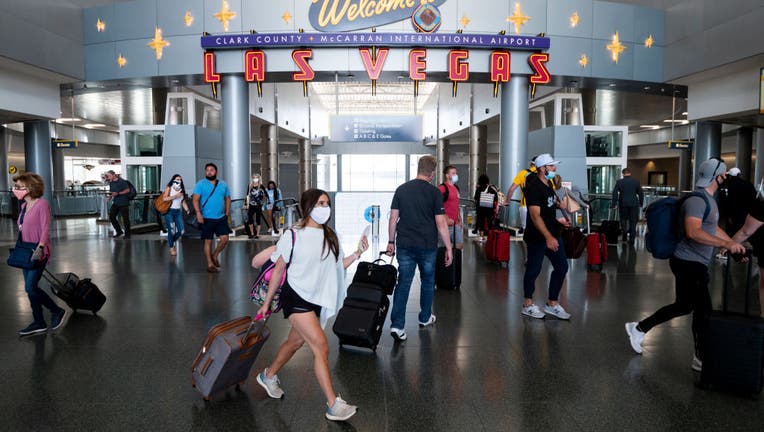 Neither injury was described as serious, according to an arrest report that compared the incident at Harry Reid International Airport to terrorism.

Stefan Mathias Hutchison, 33, of Oakland, told arresting officers he wanted to go home immediately, not wait for a flight on Monday. Police said he had also been arrested Saturday at the airport on misdemeanor charges after passing Transportation Security Administration screeners in what police also called a security breach.

Hutchison remained jailed ahead of a court date Wednesday before a Las Vegas judge on a burglary charge based on Nevada law making it a felony to enter a building with an intent to commit a crime.

A deputy public defender who represented him declined to comment about the case.

One Spirit Airlines employee hit her head on a wall when Hutchison pushed past her and through a secured door, police said. Another Spirit employee tackled Hutchison before police arrived. Both were taken to hospitals after complaining of pain, according to the police report.

The arresting officer, Eric Jones, wrote the airport at that hour was "extremely busy with thousands of travelers." He said he heard "approximately 10 loud banging sounds" in the airline ticketing area and saw "hundreds of frightened citizens fleeing," including "trampling over each other," and rushing past TSA checkpoints.

Police and social media reports compared the noises to gunshots.

"I determined the loud bangs were stanchions (line dividers) falling on the floor when the citizens were escaping the area," Jones wrote.

Hutchison spent several hours in jail following his arrest Saturday before a judge freed him with a promise to appear Oct. 11 on the misdemeanor charges. He was accused of passing a TSA screening checkpoint, entering a boarding gate concourse and taking a pair of sunglasses from a variety store before he was arrested.