Business owners say a retrofit project at the Perris Dam is impacting negatively impacting their businesses, and are demanding Gov. Gavin Newsom get involved.

PERRIS, Calif. - "I don’t want a dam failure to wipe us out," said one businessperson near the Lake Perris Fairgrounds who quickly added that "the construction is killing us."  The dam, which sits near the fairgrounds, has been undergoing much needed seismic retrofitting that was supposed to end in 2018. The agency overseeing the project, California’s Department of Water Resources, said the delays have been caused by the complexity of the project, which involves the City of Perris, the County of Riverside, several landowners and seven utility providers. But it’s the businesses and residents in and around the Perris Fairgrounds that have formed the #saveperris coalition, accusing the agency of not being responsive, and offering less than adequate compensation, especially now that the project may go for another eight to nine years, with hundreds of trucks coming in and out of the one road that goes in the area, Lake Perris Drive.

Don Kazarian, owner of the Perris Auto Speedway, one of the oldest race venues in the country, said "we want the project, we want to be safe, but I can’t even get them to stick to a schedule so I can plan my races, let alone compensate us for what they are costing us."

"I have reached out to (Gov. Gavin) Newsom, we all have, with not even a hint of a response," said Xavier Ortiz, the owner of Toro Wapo. Ortiz added that most of his parking, especially the profitable VIP sections for his sold out Latin Music concerts, is being taken away (without his approval) for trucks. Hundreds of trucks, in a project that is expected to go from 7 a.m. to 7 p.m., seven days a week, 52 weeks out of the year. Residents in the many new homes built around the Dam’s flood plain, which is supposedly being made safer by the retrofit, didn’t seem to be aware of the project extension, at least not the ones whose doors we knocked on. 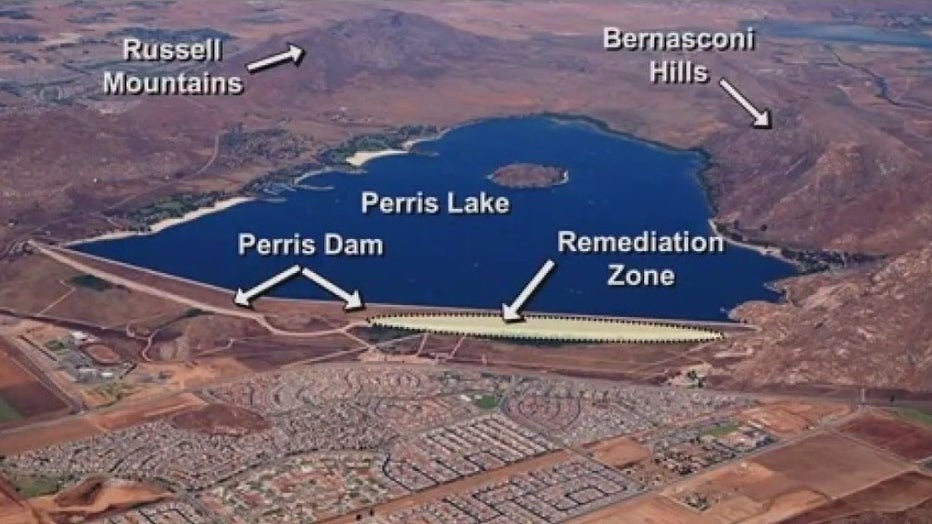 Dozens of concession stand owners and other business people who said they are affected rallied at the Riverside County Buildings, claiming approvals are being issued without proper notice and that their calls to Gov. Newsom for help have been ignored.

The Department of Water Resources is working to protect the community and its over 6,000 residents from a 100-year flood event and catastrophic earthquake failure. The Perris Dam Emergency Release Facility is part of DWR’s larger Perris Dam Modernization Project and is still in the planning phase. More than 100 meetings have been held with city, county, local businesses, and State agencies about this project. These improvements will not only provide 100-year flood protection to the community they will make improvements that will also protect a local school, interstate 215 and a water treatment plant. In addition to improved flood safety, the project includes community infrastructure improvements like new levees, bridges, a local drainage system, as well as improved roadside landscaping. All of these improvements will help the entire community as well as the Perris Fairgrounds. DWR hired an independent appraiser to determine the value of any potential loss of goodwill for all the tenants at the fairgrounds. Those appraisals have been provided to the tenants as possible compensation if the project moves forward and the tenants suffer damages. DWR recognizes some businesses are concerned and wants to continue to work with them.

The Perris Dam Emergency Release Facility is a complex design project that makes up the third phase of the Perris Dam Modernization project. Perris Dam Emergency Release Facility has many interests including the City of Perris, County of Riverside, several affected landowners, and seven utility providers. Delays have naturally occurred due to the need to coordinate with these interests and to ensure long-term maintenance of the design improvements and benefits to the community.