A look back at the extraordinary career of soccer great Pelé, who died Dec. 29 after battling cancer.

Brazilian soccer legend Pelé, winner of record 3 World Cups and standard-bearer for "the beautiful game," has died at 82.

The soccer legend had undergone treatment for colon cancer since 2021. The medical center where he had been hospitalized for the last month said he died of multiple organ failure as a result of the cancer.

"All that we are is thanks to you," his daughter Kely Nascimento wrote on Instagram. "We love you endlessly. Rest in peace."

His agent, Joe Fraga, confirmed his death: "The king has passed."

Born Edson Arantes do Nascimento on Oct. 23, 1940, in Minas Gerais, Brazil, Pelé found his passion for soccer with the help of his father, João Ramos do Nascimento, who was himself a professional soccer player.

Pelé learned to hone his athletic skills during his time with the Bauru Athletic Club, according to Footballhistory.org. His coach, Waldemar de Brito, soon recognized Pelé‘s innate talent and advised he should try out for Santos Football Club (Santos FC). 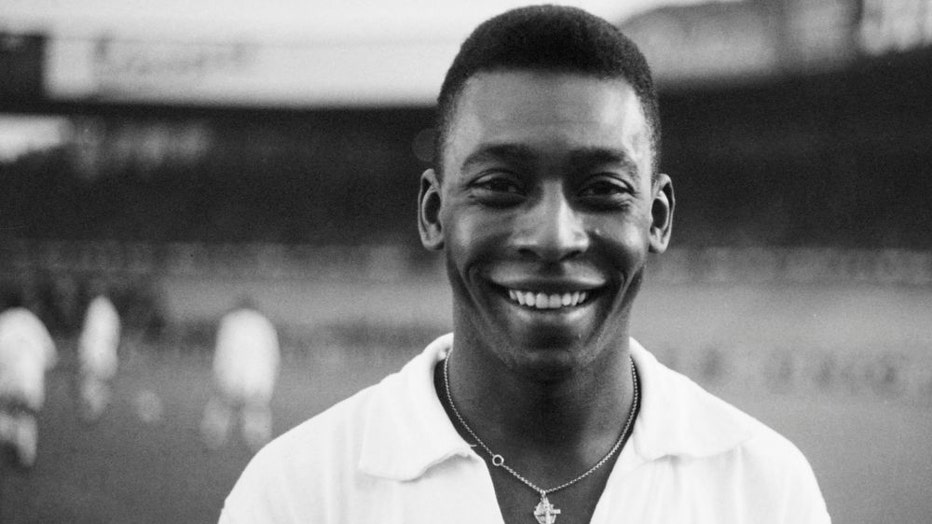 The club immediately saw his potential and signed Pelé in June 1956. He was just 15 years old at the time. He debuted in his first match with the club just three months later and scored the first of many goals in his professional soccer career. 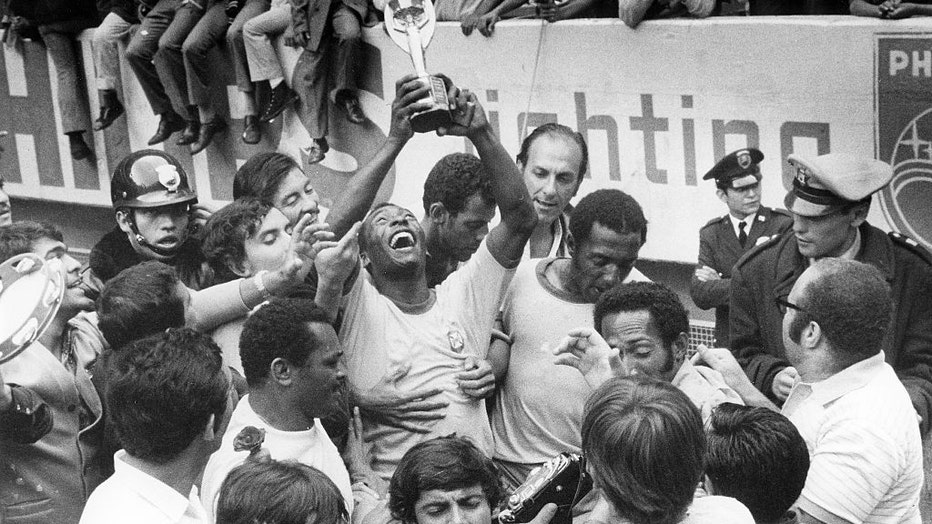 And in 1958, at 17 years old, he would catapult Brazil to becoming World Cup champions and showed the world his athletic ability during the first international broadcast of the games.

Pelé would skyrocket to fame for with historic performances during multiple World Cup appearances where he helped Brazil win the 1962 and 1970 World Cup tournaments. He remains the country's all-time leading scorer with 77 goals in 92 matches for the national team.

Brazil would decree Pelé as a national treasure and he quickly became the world's highest-paid team-sport athlete at the time with an annual income estimated at $150,000.

Pelé truly became synonymous with being a team player and wunderkind athlete, even playing through injuries to land major goals. 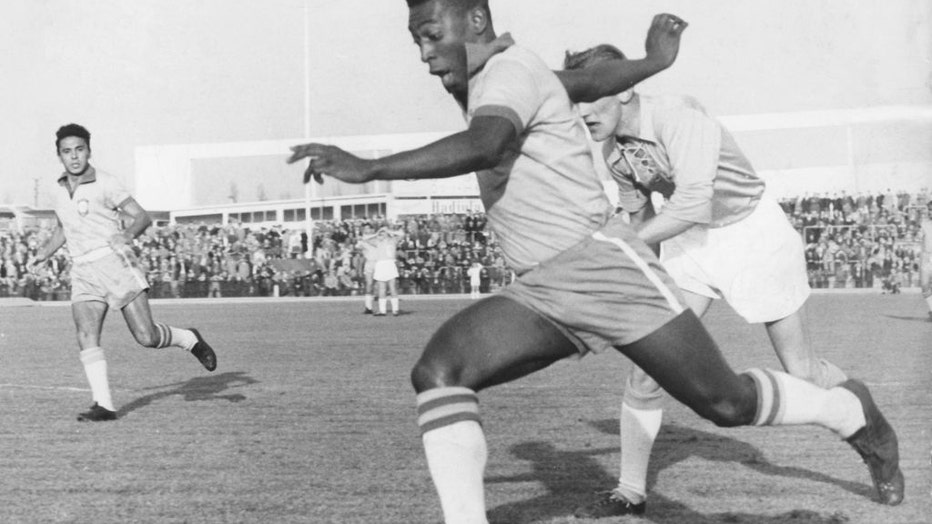 Brazilian striker Pele (front) runs with the ball past a Swedish defender of the Malmoe FF soccer club during an international friendly between Malmoe FF and the Brazilian national team. (Photo by/picture alliance via Getty Images)

In one instance in 1962, he sustained a groin injury in a game leading up to the World Cup in Chile. While Pelé scored a goal in a 2-0 win over Mexico in the first game, he aggravated his injury in the following contest against Czechoslovakia and was put on the bench for the rest of the games. But his teammates stepped up and managed to maintain their World Cup crown. 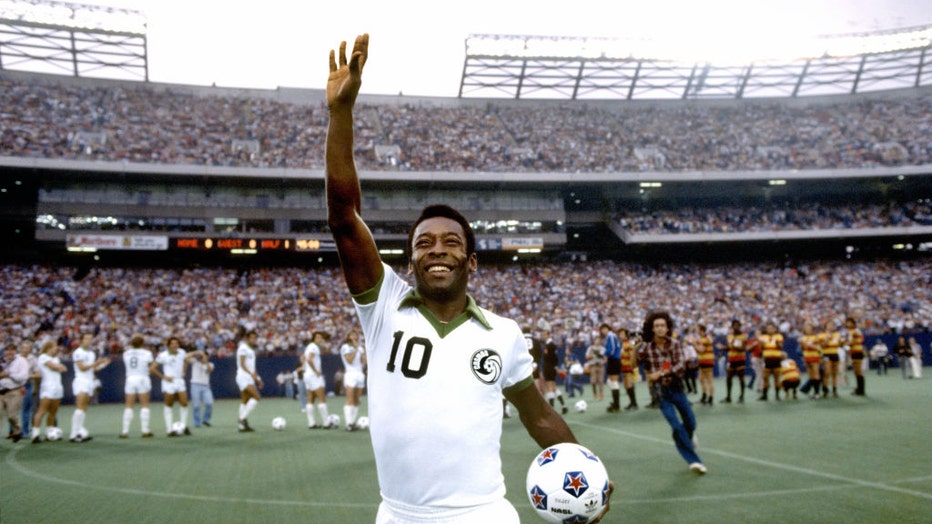 He would eventually leave Brazil for North America where he signed a $2.8-million, three-year contract with the New York Cosmos of the North American Soccer League (NASL).

His time with the NASL, while short, boosted average attendance by 80%, according to ESPN Classic.

In 1977, Pelé played his final game of soccer and officially retired.

He continued to be an active advocate for the internationally beloved sport and was often featured on sports broadcasts and writing columns. 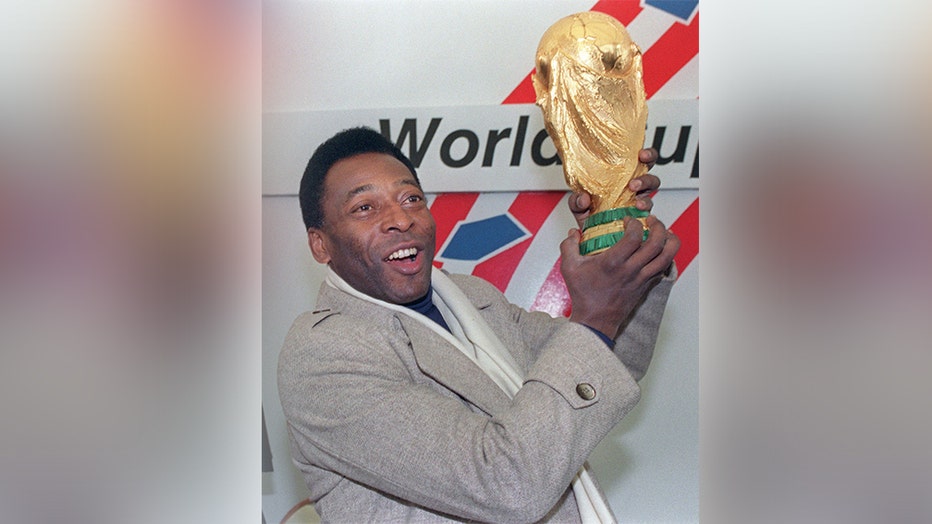 Pelé even became Brazil's Minister of Sport in 1994. In that same year, he was appointed a UNESCO Goodwill Ambassador and used his influence to support humanitarian work around the world.

And in 2012, UNESCO awarded Pelé with the Children in Need Award for his efforts and was also awarded an Honorary Doctorate Degree from the University of Edinburgh in recognition of his lifetime achievements.

In 2018, the soccer legend launched the Pelé Foundation, "a new charitable endeavor that will benefit organizations around the world and their dedicated efforts to empower children, specifically around poverty and education," according to the foundation website. 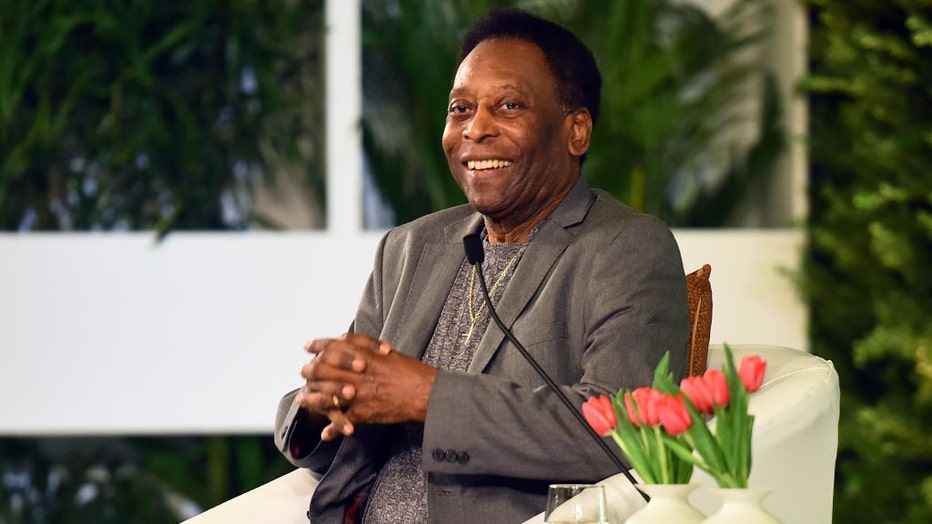 In 2021, Pelé was diagnosed with a colon tumor and began his journey with chemotherapy. He would share his journey on his social media platform, reassuring his fans that all was well.

But in November 2022, he was hospitalized in Sao Paulo, Brazil, to regulate the medication in his fight against a colon tumor.

But in December, The Albert Einstein hospital in Sao Paulo said in a statement that Pelé's cancer had advanced and that the then 82-year-old Brazilian soccer great was under "elevated care" related to "kidney and cardiac dysfunctions."

Kely Nascimento, one of his daughters, said Pelé would stay in the hospital during Christmas.

"We decided with doctors that, for many reasons, it will be best for us to stay here, with all the care that this new family at Einstein gives us," she wrote on Instagram. "We will even make some caipirinhas (no kidding). We love you and we will give up an update next week."

Pelé would endure difficult times in his personal life, especially when his son Edinho was arrested on drug-related charges. Pelé had two daughters out of wedlock and five children from his first two marriages, to Rosemeri dos Reis Cholbi and Assiria Seixas Lemos. He later married businesswoman Marcia Cibele Aoki.