After an oil spill and a pandemic put the Huntington Beach air show on hiatus, the planes returned this weekend.

HUNTINGTON BEACH, Calif. - If you were anywhere near the South Bay Saturday, you heard the thunder, and if you were anywhere on the sand in Huntington Beach you saw them — some of the world’s best military and civilian flight demonstrations.

From the popular U.S. Air Force Thunderbirds, to the Navy Leap Frogs and the U.S.Army Golden Knights precision parachute teams, the 2022 Pacific Airshow is back in town this weekend — delayed last year due to the oil spill, and the COVID-19 pandemic the year before.

Thousands of people settled in along the coast for the three-day event, which brings in over $105 million to the area, according to organizers. It also brings in some local aviation superstars, from Captain Dan "Thunder" Kats of Los Angeles and Maj. Ian "Bear" Lee of Cerritos, both flying Thunderbirds over their own backyards, quite literally. 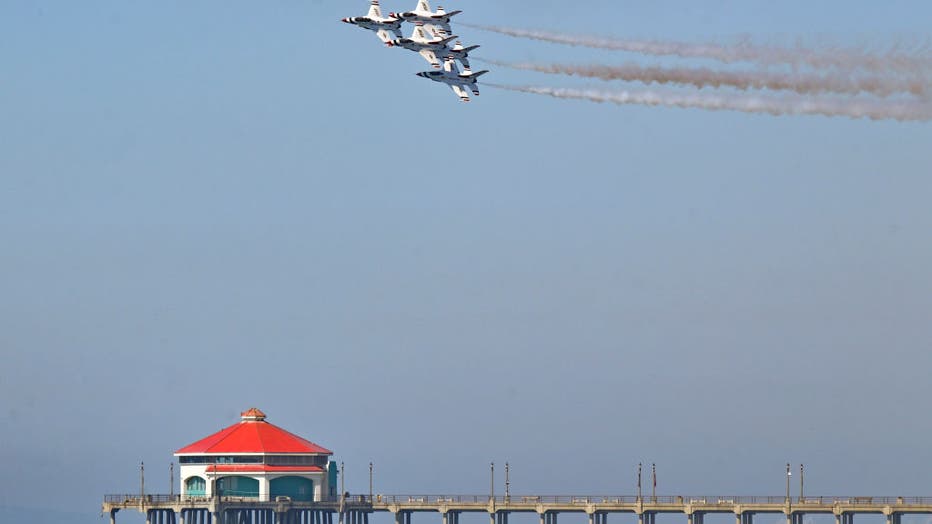 PREVIOUS COVERAGE: California oil spill: 4,000-foot section of pipeline split, dragged out of place by up to 105 feet

Women pilots are also on the celebrity roster, including Maj. Lauren "Threat" Schlichting, who flies right wing position, as close as 18 inches to the next jet. There's also Michelle "Mace" Curran, the combat fighter pilot flew with the Thunderbirds from 2019 to 2021 solo, in the critical number 5 position. She left active duty with the rank of major, and actually trained some of the pilots flying this weekend, telling us, "it’s like watching your children take off, literally," and admitting she gets just as excited today, seeing the airshow from the ground as she did while flying in it.

As one of the first women to reach the heights of aviation mastery, Curran has quite the story to tell, especially to the many young girls at the show, for whom that dream is a reality, thanks to people like her.