In Alachua, Brevard, and Flagler counties, elections officials and law enforcement agencies say suspicious emails are making the rounds, allegedly telling people for whom to vote in a threatening tone. The email message appears to be an attempt to influence the recipients into changing their party affiliation, they added.

Alachua County elections officials say a few dozen voters received the email Tuesday morning. Its subject line reads "Vote Trump or Else!" and claims to be from a far-right group that rose to national notoriety after the first presidential debate.

Election and law enforcement officials say that specific email targets Democrats, stating, "You will vote for Trump on Election Day or we will come after you. Change your party affiliation to Republican."

Brevard County Sheriff Wayne Ivey calls similar emails distributed in his county disturbing but he said an investigation has determined they originated from outside the United States and are not considered a valid threat. 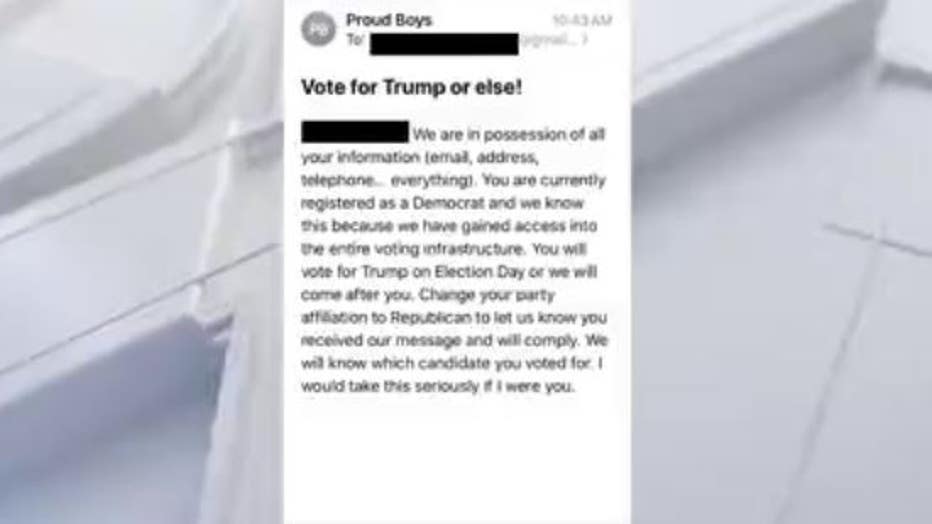 "I want to personally assure everyone that the Sheriff’s Office, our federal and local law enforcement partners are doing everything possible to identify those responsible. In America, every registered voter is afforded the right to participate in the electoral process and deserves to do so without intimidation or influence," Sheriff Ivey said.

Flagler County has expressed similar concerns regarding an email scam that demands voters to vote for a specific presidential candidate on election day. They reminded citizens that voter intimidation is illegal and to report any cases of it to the Federal Trade Commission at https://www.ftc.gov/.

The Supervisor of Elections in Alachua County is concerned about possible voter suppression. The office is now working with the Alachua County Sheriff's Office, state officials, the FBI, and the Department of Homeland Security to investigate who sent the emails.

"We want to provide everybody with a safe voting experience, and when people are receiving messages like this, regardless of the source, it runs counter to us being able to provide that," Pyche said.

“Please do not allow this or any other action by anyone to intimidate or dissuade you from your right as an American to cast your ballot for the candidate(s) of your choosing during early voting or on Election Day!”  Sheriff Ivey said.

If you have received the below email, citizens are urged to contact their local law enforcement agency.

Joe Biden's team has also released a statement on the possible tactics to suppress votes in Florida:

“In the United States of America, we cannot and will not stand for any behavior that could intimidate voters from participating in our democracy. Our country stands for freedom, liberty, and democracy, and these scare tactics have no place in our state. It’s clear that those running scared will try anything in the closing weeks of the election. There are no excuses for this behavior. We are committed to making sure every Floridian can vote and every vote is counted.”