OAKLAND, Calif. - An Oakland family has been dealing with the heartbreaking loss of a father from COVID-19 as they’ve been holding out hope for their mother’s full recovery from the devastating illness.

The father, Carlos Reyes, weeks shy of his 53rd birthday died on August 4th, which also happened to be the day after his wedding anniversary with his wife of 22 years. 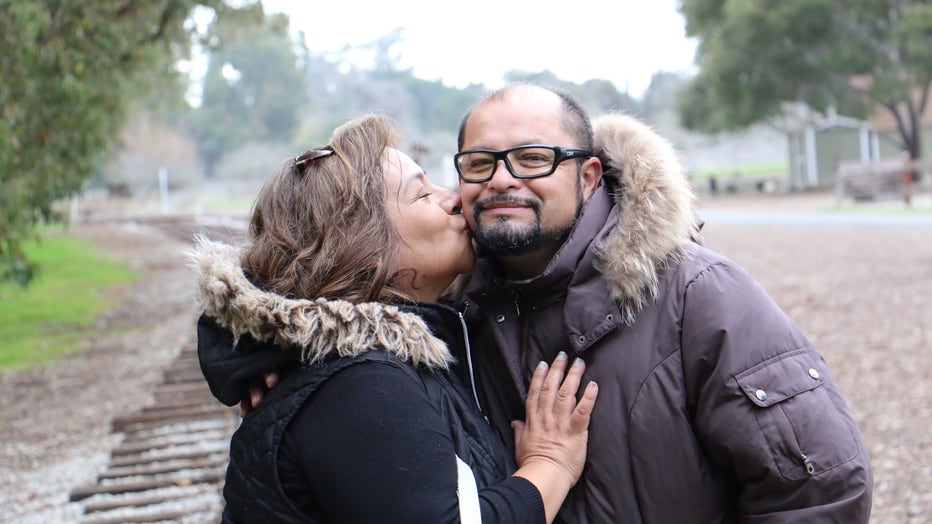 His family said that it was as if he wanted to make it to their anniversary before leaving.

"He passed away at 6:55 a.m. the very next day. Almost felt like he knew, almost wanted to hold out, and he was doing his best," daughter Maricruz Martinez shared with KTVU. "He passed away in ICU while my mom was also in the ICU."

At the time of his death, wife Maria Reyes, was sedated and on a ventilator in the same intensive care unit as her husband at Alta Bates Summit Medical Center in Oakland, both diagnosed with the delta strain of the coronavirus. Neither were vaccinated.

Meanwhile, the two youngest in the family had been in and out of hospitals because they, too, got seriously ill with the virus. 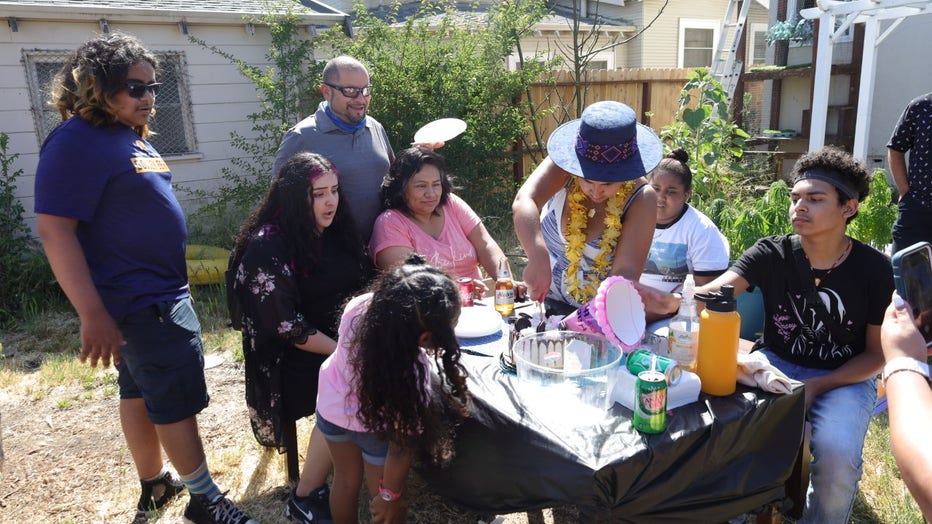 Maricruz Martinez shared a photo of her family in June 2021, a photo she said was one of the last times they were all together before her father Carlos Reyes died from COVID-19. The delta variant of the virus also sent her mother and two siblings to

"I would say, it’s certainly my worst nightmare," Martinez said.

That nightmare began on July 4, when the youngest of the family, 14-year-old Sergio Reyes, was so sick, he had trouble breathing and was battling a high fever. The teen was rushed to UCSF Benioff Children's Hospital-Oakland, where he was treated.

After a couple of days, he was released but later returned after his condition worsened. Again the teen was hospitalized and treated at Children’s. Days later, he returned home and was quarantined in his room to recover.

But it wouldn’t be long before the rest of the household got sick. The highly contagious delta variant raced through the family, sending Carlos Reyes to the hospital, where he would live out his last days.

Martinez said in the midst of it all, her 19-year-old sister, Emma, and her mother also battled with the virus at home but then once their symptoms worsened, they too had to go to the hospital.

"Emma was treated in ICU. She has asthma, and it really affected her," Martinez said, recalling how rapidly the symptoms intensified. "One day I’m on FaceTime with Emma, and the very next day she has zero access to her phone, is sleeping and had to be put on oxygen," the sister said.

Emma and her mother were suffering and struggling to breath, and so the mother drove them both to the hospital, where she learned she had developed pneumonia on top of COVID.

"So my brother was home by himself, while the other three family members were in the hospital," Martinez explained.

Martinez, 32, and her sister, Jasmine Fierro, 35, both live outside the home and have since been watching over the two younger siblings. They did not contract the virus.

In a GoFundMe set up by the older sisters last month, they shared, "Emma was released a few days after and has been home with our brother since July 23rd… they have been isolated and taking care of each other."

Both Sergio and Emma Reyes have since recovered and were no longer contagious.

"We’ve been able to spend time together now. Getting to hug them for the first time was overwhelming," Martinez said, noting it had been almost a month and a half that the virus kept them apart.

She said she and her older sister were now the primary caretakers of their siblings, as the two eldest worked to pay rent and bills to keep the house running and in order, a daunting task that they were not financially prepared for.

"My older sister, Jasmine, and I do not have the capacity to care for our younger siblings on our own. Emma is in college (virtual) and my brother was just accepted into a private high school in Berkeley," Martinez wrote on GoFundMe.

The sisters said donations would go toward continued medical care for their mother as well as food, shelter and education costs for the younger siblings. An expense they had not expected when they first set up the fundraising effort was those related to their late father’s hospital bills and funeral.

"My siblings and I are all young and have never dealt with a loss or had to prepare a funeral for anyone," Martinez shared on GoFundMe. "We have no idea what the medical or funeral costs will be."

As for the younger siblings, she said they’re leaning on their older sisters as they prepared for the start of a new school year.

"They’re doing their best. They're asking for us a lot," Martinez said. "I’m grateful that they are not alone and they have me and my older sister."

As grateful as Martinez has been for their tight-knit family, it has been a lot for one family to endure. On Tuesday, it was the first time in almost two months that Martinez was able to see her mother.

"I was brushing her hair, trimming her nails," the daughter said after the visit. "It was great. The last time I saw her in person was the Fourth of July."

But it was also heartbreaking to see her mother, always the caretaker of the family, suffering and in need of care. "It was definitely a challenge to see her in that condition. She’s still on a ventilator."

The ventilator tube has now been inserted in her neck to allow her to help manage some of her own breathing, the daughter explained, so she’s made some progress. But the family said it’s unknown how long she’ll need care and expected the road ahead would be a long, arduous one.

Given her fragile condition, the family has opted to wait to tell their mother about her husband's death, as they feared the heartbreak of the news would lead to setbacks in the recovery process. That has made the devastating situation even more difficult. "She constantly asks about him," Martinez said.

The photo the family has shared in the GoFundMe showed the happy couple together, Maria Reyes learning in to kiss her smiling husband. In an update message on the page, Carlos Reyes was remembered as someone who "devoted his time to uplifting and encouraging others. He was a devout man of faith, and so we know that he is at peace," the family wrote.

To Martinez, he was a caring, loving man who was actually her step-dad, but to her, the only father she’d ever known. "Always there for us no matter how tired he was. He was eager to be a dad and to help anyone he thought was in need," the daughter shared. 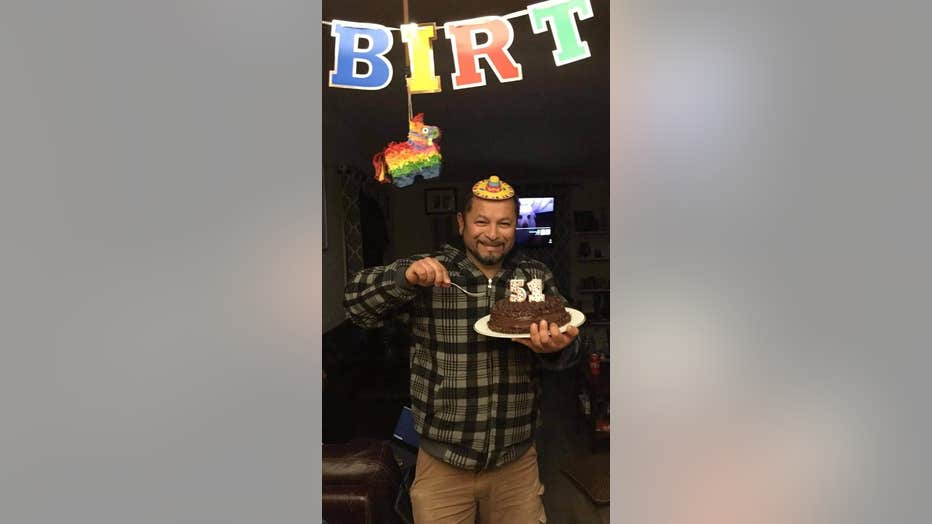 Carlos Reyes of Oakland died from the delta variant of COVID-19 on August 4, 2021, his family said.

Carlos Reyes was also strong in his convictions, which unfortunately according to Martinez, included his mistrust in the COVID-19 vaccine.

The daughter said that her father was not vaccinated and he discouraged the rest of the family to get their shots.

"One of the things that has also been challenging through this time is knowing that I've been vaccinated for months now. But nobody else in my immediate family was vaccinated. Nobody besides me," said Martinez, adding, "My mom did want to get vaccinated, but our dad was not willing to have himself or family members being vaccinated," she said.

She tried desperately to convince the family but said sadly, her father bought into conspiracy theories, felt that his faith in God would prevail, and did not turn to science-based evidence.

There was also misinformation from religious leaders, as well as mistrust in the government, the daughter added.

"Trust is a big deal when it comes to people of color and trusting what the government puts out," Martinez said.

She also stressed the importance of considering that the decision not to get vaccinated went beyond one individual, a message that she wanted to amplify even in the Bay Area, where COVID-19 vaccination rates were higher than the rest of the country.

"I think it’s important to put others before yourself. I know a lot of times you’re thinking, ‘If I get it, I get it.’ Clearly, like in my family, my brother got it who is doing just fine now, but when you live in a shared household, sure you might not want to [get vaccinated] but do you want to infect your family?" Martinez asked.

Martinez, who’s an educator and dean of students at a charter school in Oakland said throughout this painful experience she hoped to educate and inform others and help prevent anyone else from having to go through the heartache and loss her family has suffered.

"One of the things that our dad said before he passed away," Martinez shared, "he did apologize to us and said I'm sorry for not believing in getting COVID and getting sick. And please let everyone in the family get vaccinated."

She hoped through her family’s story, those who have opted not to get vaccinated rethink that choice, before it’s too late.

"Do you really want to be on your deathbed before you realize that this is something important not just for me but for your loved ones?" she asked.

As she worked to get the message out, she's put her primary focus on her siblings. "We are a strong and tight knit family that has always helped raise each other and encourage each other," Martinez shared. "I will transition into their main guardian and will do my best to make my parents proud." 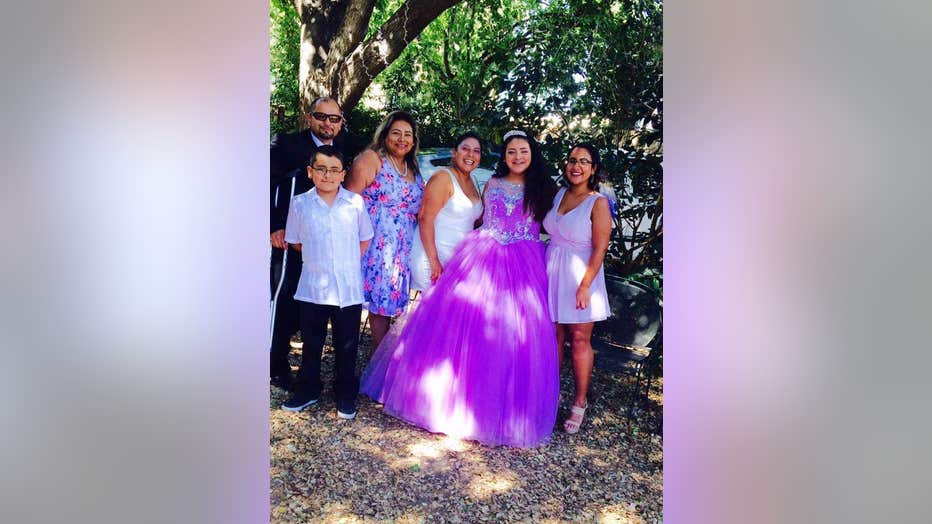 Maricruz Martinez called on people to get vaccinated after her father died of COVID-19 on August 4, 2021. (Reyes Family )

To help the Reyes family, donations can be made on the GoFundMe here.