Black-eyed peas, collard greens and cornbread served on New Year’s Day is a tradition that is not only popular in the South, but all over the nation. The saying, "peas for pennies, greens for dollars, and cornbread for gold," is associated with the foods, according to AllRecipes.com.

Black-eyed peas are also associated with a “mystical and mythical power to bring good luck,” said John Egerton, a Southern food researcher in his book “Southern Food: At Home, On the Road, In History,” the food outlet reported. 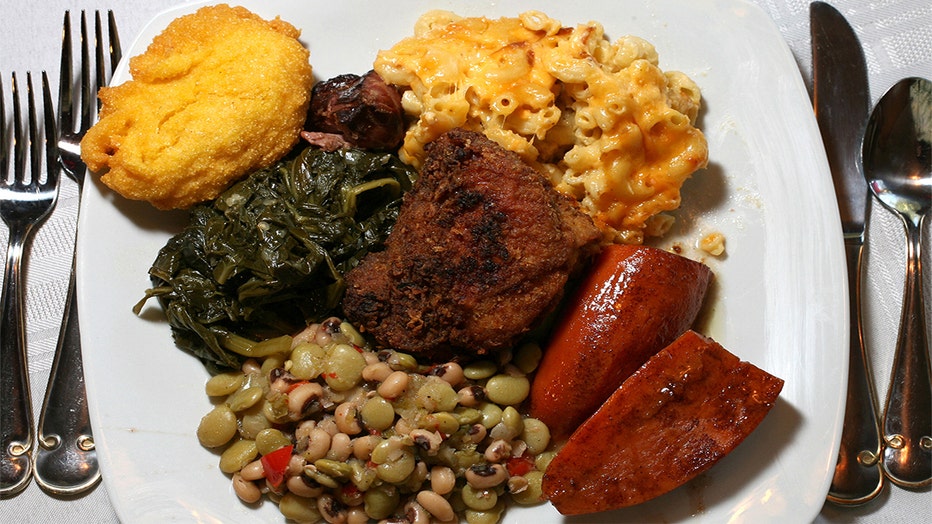 The green color of the collard greens represents money and the yellow color of cornbread represents gold for a prosperous new year.

Another unusual but common tradition involving black-eyed peas is adding “luck” by cooking the pot of peas with a penny or dime inside, according to the Atlanta Journal-Constitution. Then whoever gets the bowl with the coin in it has the best luck for the new year.

Enslaved people from West Africa brought black-eyed peas to the Carolinas and grew them in their gardens, after which the the recipes eventually made their way to their slaveowners’ tables, the New York Times reported.

“Some white Southerners claim that black-eyed peas saved families from starvation during the Union Army’s siege of Vicksburg in the Civil War,” read a 2010 Op-Ed article in The New York Times.

Pork and sauerkraut are also a popular food tradition on New Year’s Day, especially in Pennsylvania, as the state’s Dutch believe that the meal will bring good luck in the new year, WFMZ reported.

Dutch and German settlers in Pennsylvania have served pork and sauerkraut on New Year’s since the 1800s, the Times reported. In Denmark, dishes are thrown at a neighbor’s door as a sign of friendship, according to the report.

Pork and sauerkraut, also a popular New Year’s Day dish in Germany, promises as much luck as the cabbage’s many strands, USA Today reported.

"Pigs take their snout and root forward, as opposed to digging backwards," Linda Pelaccio, host of the culinary radio show "A Taste of the Past," told the paper.

In Italy, pork and lentils make for a lucky dish, the paper reported.

In Spain and Mexico, eating 12 grapes at midnight as the clock strikes once for each hour will bring good luck for the next 12 months, according to AllRecipes.com.

It is also good luck to eat something in the shape of a circle, such as a donut, according to Cox Media Group.

During Chinese New Year, or Lunar New Year, which falls on Jan. 25 this year, people in China or Chinese people around the world polish off “longevity” noodles.

Soba noodles are also served on New Year’s Day in Japan, according to the paper.

Around the world, fish symbolizes abundance in the new year, the AllRecipes.com reported. Asian cultures feast on whole fishes to celebrate Lunar New Year. The fishes’ silvery scales also stand for bountiful coinage, according to the report.

Eastern European countries like herring as their fish of choice.

In Germany, people not only eat an entire carp but also save fish scales in their wallets for extra good fortune, according to USA Today.

One of the most famous New Year’s Day traditions is the midnight kiss. The first kiss of the new year with your beloved at the stroke of midnight is believed to nurture affection for the next 12 months.

Another odd tradition involves not doing laundry. According to folklore, washing clothes on New Year’s Day means washing a loved one away or washing away good fortune, according to the Daily Mail.

The laundry superstition sparked debate on social media, with one user saying, “Nope, if it needs doing it needs doing. If I spent my life worrying about superstitions, my life would be ruled around it and nothing would get done. Life is for living,” the Mail reported.

The first guest in your home, sometimes called “first footing” or a “first footer” for the first person who steps foot in your home, also portends what kind of fortune you will have for the rest of the year, according to the Times.