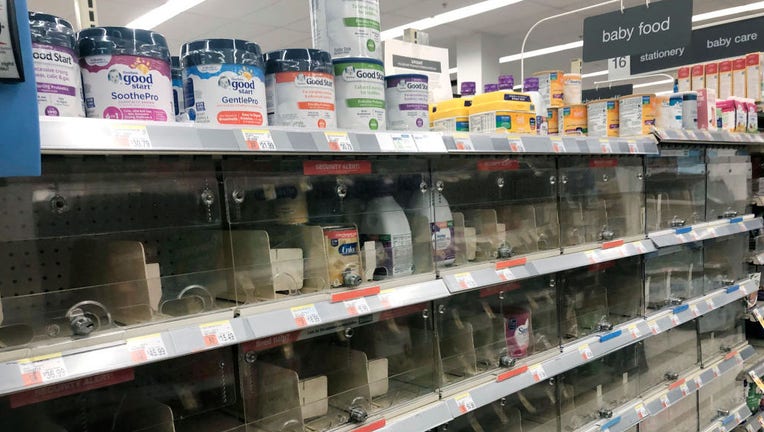 With the federal government taking steps to manage the formula shortage crisis, Nestle is helping to ease the shortage by transporting Gerber baby foods from the Netherlands and Alfamino from Switzerland to the United States.

A Nestle spokesperson in a statement to FOX Television Stations said: "We have brought in Gerber Good Start Extensive HA from the Netherlands and Alfamino from Switzerland for Nestle Health Science. We prioritized these products because they serve a critical medical purpose as they are for babies with cow’s milk protein allergies. Of note, both products were already being imported so we were able to act quickly. We moved shipments up and rushed via air to help fill immediate needs."

"Given the FDA announcement Monday which aims to give companies temporary flexibility with regard to the import of certain infant formulas, we are reviewing the guidance and assessing where we may be able to tap into the Nestle global nutrition network to help."

Nestle did not specify how much formula they shipped to the U.S.

The baby formula shortage involves several factors, including pandemic-related manufacturing and supply chain issues. But it has been worsened by a safety recall that followed the deaths of two infants.

In February, the Food and Drug Administration warned consumers to avoid some powdered baby formula products from a Sturgis, Michigan, facility run by Abbott Nutrition, which initiated a voluntary recall. According to findings released in March by federal safety inspectors, Abbott failed to maintain sanitary conditions and procedures at the plant.

Abbott, the largest manufacturer of infant formula in the country, is one of only a handful of companies that produce the vast majority of the U.S. formula supply, so their recall wiped out a large portion of the market. Federal regulators reached a deal this week to allow the company to restart the Michigan plant, but Abbott said will take eight to 10 weeks before new products begin arriving in stores.

Some retail stores have put limits on how many baby formula products consumers can buy at a time. At Walmart, customers are limited to five cans per day. At CVS and Walgreens, customers can only buy three products at once.

Last month, Target told FOX Television Stations that it was "closely monitoring" the shortage, but the retailer hasn’t announced in-store purchasing limits. On Target’s website, formula sales are capped at four cans. Kroger has not said whether they’re limiting how much baby formula customers can buy.

Last week, President Joe Biden said the federal government would take steps to ease the baby formula shortage. The White House said the government will make it easier for companies to import formula from overseas, push states to crack down on price gouging, and temporarily relax some of the product requirements for participants in an assistance program known as WIC.

Biden also discussed with executives from Gerber and Reckitt how they could increase production and how his administration could help, and talked with leaders from Walmart and Target about how to restock shelves and address regional disparities in access to formula, the White House said.

According to the White House, the United States normally produces 98% of the infant formula it consumes, but until the Abbot plant is back online, the FDA will announce steps to import more formula from countries like Mexico, Chile, Ireland, and the Netherlands.

House Democrats unveiled a $28 million emergency spending bill Tuesday to address the shortage of infant formula in the United States.

Democrats introduced a second bill Tuesday that the House is also expected to vote on this week. That bill, sponsored by Rep. Jahana Hayes, D-Conn., would in extenuating circumstances for WIC participants the ability to use vouchers to purchase formula from any producer rather than be limited to one brand that may be unavailable.

The House Appropriations Committee will hear from FDA Commissioner Robert Califf on Thursday to discuss the agency's budget. Lawmakers are expected to focus much of the discussion on the formula shortage. A panel is also expected to have a second hearing featuring experts who will discuss the recall of infant formula produced at the Abbott facility and the FDA’s handling of the recall.

The House is expected to take up the emergency spending measure later this week before lawmakers head back to their congressional districts for the next two weeks. It's unclear where Republicans stand on the bill. Rep. Kay Granger, the ranking Republican on the House Appropriations Committee, said they need more details.

Additionally, the FDA is looking to boost imports by updating its review process to make it easier for foreign manufacturers to begin shipping more formula into the U.S.

FOX 10 Phoenix, FOX 29 Philadelphia, FOX 5 DC, and the Associated Press contributed to this story. This story was reported from Washington, D.C.