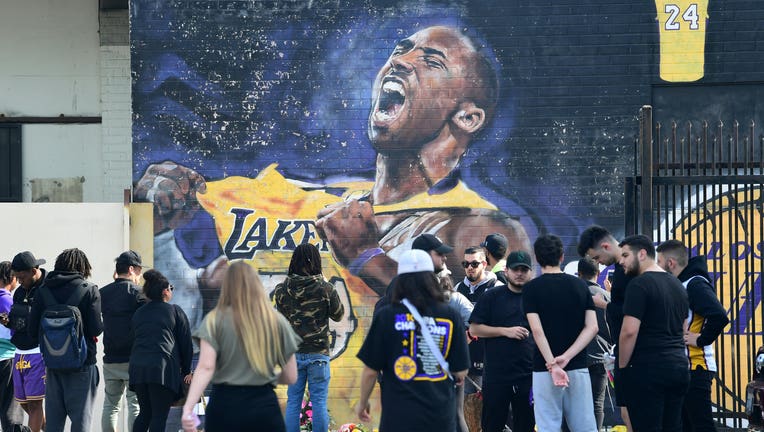 Fans gather to mourn the death of NBA legend Kobe Bryant at a mural near Staples Center in Los Angeles, California on January 27, 2020, a day after nine people were killed in the helicopter crash which claimed the life of the former Los Angeles Laker (Getty Images)

LOS ANGELES - With the Lakers reeling from the death of Kobe Bryant, the NBA postponed the team's scheduled game tomorrow night against the Clippers at Staples Center.

"The decision was made out of respect for the Lakers organization, which is deeply grieving the tragic loss of Lakers legend Kobe Bryant, his daughter Gianna and seven other people in a helicopter crash on Sunday," according to a statement released by the league Monday afternoon. "The game will be rescheduled at a later date."

While Bryant's death in a helicopter crash in Calabasas sent shock waves across the NBA, games in other cities went on as scheduled on Sunday, despite the emotional impact on many players. Various teams engaged in tributes to Bryant, intentionally taking 24-second shot clock or 8-second backcourt violations in honor of the two numbers Bryant wore during his NBA career.

The Lakers are next scheduled to play Friday night at Staples Center against the Portland Trail Blazers. There was no immediate word on whether that game will go ahead as scheduled.

The Lakers issued a statement confirming the game's cancellation, and thanking the public for its support.

"The Los Angeles Lakers would like to thank all of you for the tremendous outpouring of support and condolences," according to the team. "This is a very difficult time for all of us. We continue to support the Bryant family and will share more information as it is available."