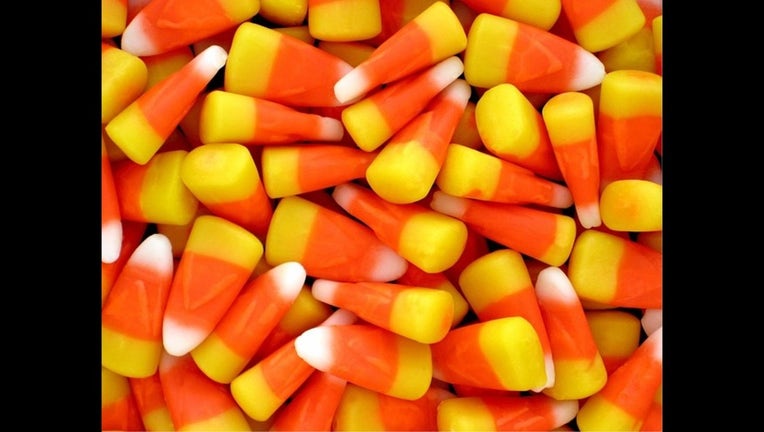 LOS ANGELES, Calif. (FOX 11 / FOX News) - About 35 million pounds of candy corn are produced annually, which equates to roughly 9 billion pieces. So if you think candy corn is everywhere this time of year, it's not just your imagination.

"Halloween is a holiday that celebrates fall's harvest and ever since its invention, candy corn has been a symbol of the season because it represents such a major fall food," explains Beth Kimmerle, a confectionery expert and author of four culinary history books.

It may not replace the original, but new Caramel Macchiato corn was the favorite new seasonal variety. (CandyWarehouse.com)Candy corn was invented in the 1880s by the Wunderle company. But it wasn't until Goelitz--the candy manufacturer that would later become the Jelly Belly Candy Company--started producing the tricolored candies in 1898 that the confection really took off. Goelitz sold the confection in boxes branded with roosters, which earned the candy the nickname of chicken feed.

The original recipe called for sugar, corn syrup, carnauba (or palm) wax, water, marshmallow and fondant. Today, it takes a few more ingredients than that, including artificial preservatives and dyes, to make the traditional yellow-orange-white configuration.

Brach's, which makes its candy with real honey, is the world's biggest manufacturer of candy corn --making 8 out of 10 pieces sold.

While classic candy corn is still the biggest seller--this year they've introduced some brand new flavors into the mix including Peanut Butter Cup and Caramel Macchiato. And while not everyone claims to like candy corn, retailers credit these new innovations with driving demand.

"Demand for candy corn was very strong this year and we ran out of stock about a week earlier than normal," Evans Boney of online retailer CandyWarehouse.com told FoxNews.com. "The creativity of many candy manufacturers seems to have reinvigorated the market for candy corn."

So will any of these new flavors --that include Caramel Macchiato, fruit and pumpkin spice --convert candy corn haters?

For people who didn't consider themselves candy corn fans--and those who love the original-- the Caramel Macchiato flavor was a big hit.

"This isn't overly sweet and it has a smooth caramel flavor that really reminds me of a Starbucks drink," said one Chew on This taster.

"Straightaway you're getting a strong coffee flavor," said Kimmerle at first bite. "And it also has a strong vanilla note, I like that."

Fruity candy corn is also another popular trend this year according to Boney. Starburst's candy corn is a slightly grittier, mealy version of the original chews but the taste is a dead ringer for the lemon and strawberry flavors.

"It's awesome!" said one enthusiastic Chew taster. "It's fruity, slightly creamy and melts in your mouth more than the chewy version."

But the pastel looking triangles are more reminiscent of an Easter treat than something that's meant to represent Halloween.

Pumpkin spice, as usual, proved to be one of the most divisive new flavors tasted.

Kimmerle enjoyed the pronounced taste of "clover and cinnamon" and said it reminded her of pumpkin pie. But not everyone agreed.

"I actually do like pumpkin spice, but it's [candy corn version] incredibly sweet and I don't really taste anything spicy in here," said another taster.

Even if candy corn isn't your usual cup of tea, they're still one of the healthier candies on the market. About 15 pieces are just 150 calories and fat free.

New flavors may help draw in more candy fans, but the original candy corn will always be a stalwart when it comes to Halloween.

Says Kimmerle, "I'm a traditionalist. I like trying the new flavors but if I'm buying a big bag, I'm gonna go with the classic."