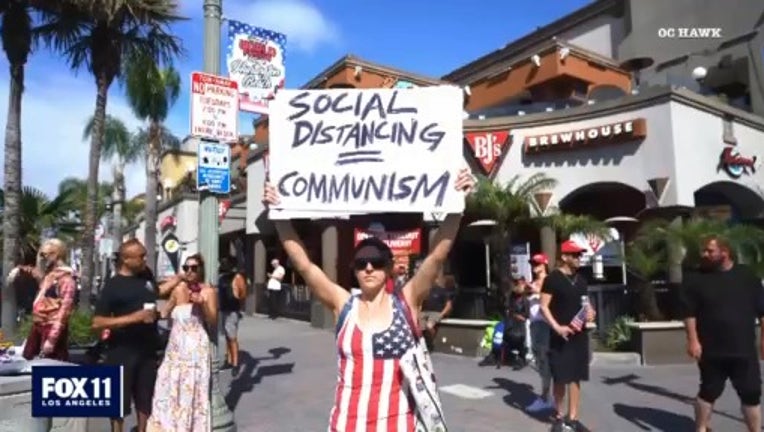 The protesters largely ignored social distancing and face mask recommendations as they gathered around Main Street and Walnut Avenue on Friday. They carried signs with messages that included "Liberate Huntington Beach,'' "Open Cali Now'' and "COVID-19 Is a Lie,'' the latter held by a man
wearing a hazmat-style suit, mask, goggles and gloves.

Some carried American flags and banners in support of President Donald Trump during the local "March for Freedom'' protest, organized by a local business owner as part of a string of national rallies objecting to quarantine rules.

No arrests were made during the rally, which lasted about two hours, according to Huntington Beach police Office Angela Bennett.

The protest came on the day the city closed all metered parking along Pacific Coast Highway and all beaches within Huntington Harbor. Huntington Beach, one of the largest cities in the county with a population of 203,761, has one of the highest rates of coronavirus cases -- 103. 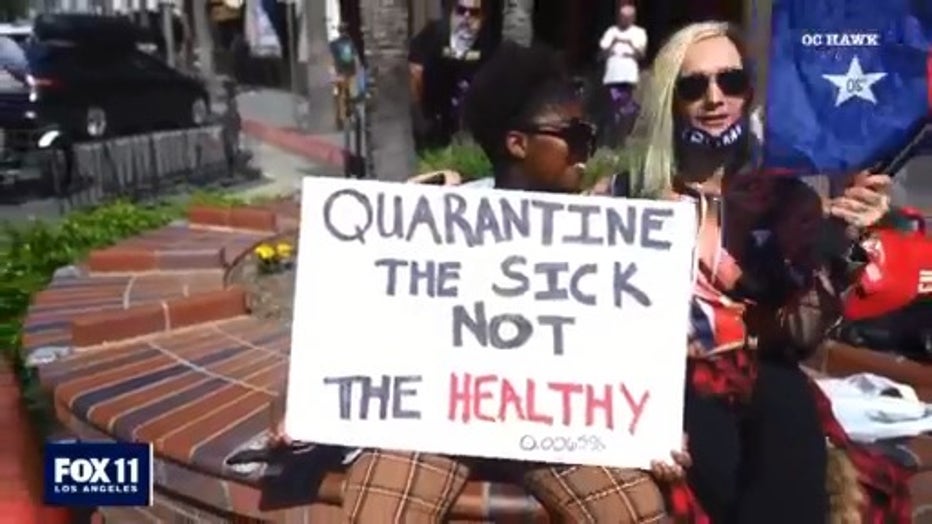 "I think we've got to start treating people like adults. There's got to be some relaxing,'' Moorlach said. "I don't play golf, but, really? You're not going to let people play golf? Or buy cars at a car dealership or go to the dentist?''

He acknowledged that some people could be asymptomatic, meaning they are carriers of the virus but show no symptoms, "but life comes with risks, and I don't see anyone telling me not to drive anymore because I might die. I don't have all the answers, but, wait a second, maybe we need to lighten up in
certain areas.''

The senator said he has been fielding heartbreaking calls from small business owners who are losing their companies and struggling to get loans. Restaurant owners, he said, have tried to get insurance to pay off on business disruption only to be told their claims don't cover pandemics.

If, after relaxing quarantine rules there is an uptick in COVID-19 then the state could go back to more restrictive measures, Moorlach said. But health experts say that lifting stay-at-home orders too early
could lead to a dangerous uptick in COVID-19 cases and flare-ups in areas where the outbreak has eased.

Local resident Lance Siegal, who was passing through the area when he saw the protest, said he disagreed with the demonstrators' call to immediately end stay-at-home restrictions.

Other residents took to social media to express their views. "Damn I'm embarrassed to be a resident of Huntington Beach right now...,'' one said, while another tweeted footage of the demonstration and
wrote, "From my hometown of Huntington Beach, CA today. (Expletive) morons.''