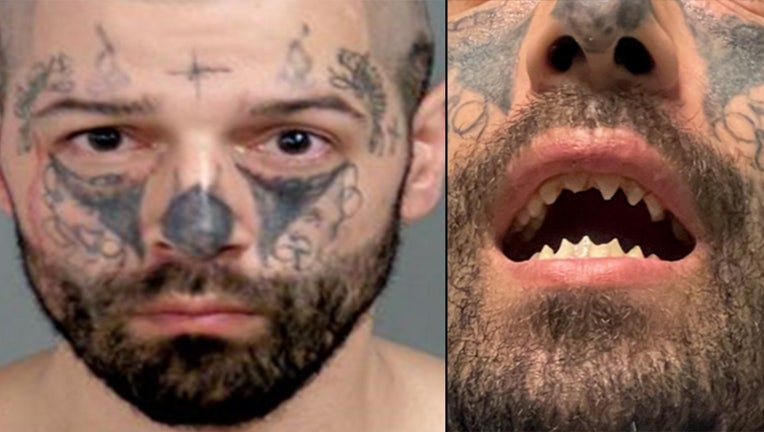 Michael Barajas, 36, had filed teeth and threatened to rip out a woman's throat as she was kept against her will in Genesee County, the sheriff says.

SOUTHFIELD, Mich. (FOX 2) - The Genesee County Sheriff said a 36-year-old man has been arrested after he kidnapped a woman and threatened to "rip out her throat" if she didn't do what he told her to.

According to the sheriff, Michael Barajas was arrested last week by the Genesee Human Oppression Strike Team (GHOST) after authorities said a 20-year-old pregnant woman escaped after three weeks of being held and sexually assaulted.

In a Facebook video posted on Wednesday, Genesee County Sheriff Chris Swanson detailed the horrific torture the woman endured after she was kidnapped.

According to Swanson, the woman was walking down the street and was in need of a shower and shelter. Swanson said Barajas saw the woman and took advantage her needs by offering her a shower, food, and shelter.

Swanson said the woman accepted the offer and Barajas took her to a dilapidated home where he locked her inside a room and tied her to a bed. Swanson, who was telling the woman's story from a home that was stuffed with trash and belongings, did not say if that home was the one where she was kept.

However, he said that Barajas had screwed the windows shut and then pointed to a window with screws - keeping it shut.

"This guy used the opportunity to not only sexually assault but have people come over and traffic her as she was tied forcibly to the bed while they assaulted her," Swanson said.

On Dec. 8, he said she suffered a medical emergency and was seen by nurses who recognized the woman was in need of help.

Swanson said during the entire time she was kept at the house, Barajas threatened to bite her neck with his sharp teeth.

"Barajas threatened that if she didn't do everything that he told her to do, that he would bite her neck and rip out her throat," Swanson said.

The sheriff held up a photo of Barajas and then showed his teeth, which appear to be filed to points.

Swanson said Barajas groomed the woman by filling her need of shelter and even forced her to write a letter where she described Barajas as "her daddy".

"This guy is a monster. If you look at the teeth that are filed down and the threats of ripping out a throat, I will say no more," he said.

After the nurses alerted authorities to the woman's need, GHOST raided the home and arrested Barajas on multiple charges including human trafficking, kidnappings, sexual assault, possession of methamphetamine and ecstasy, and more charges.

Swanson said there are other suspects that could be brought in as well and that the case is not over.