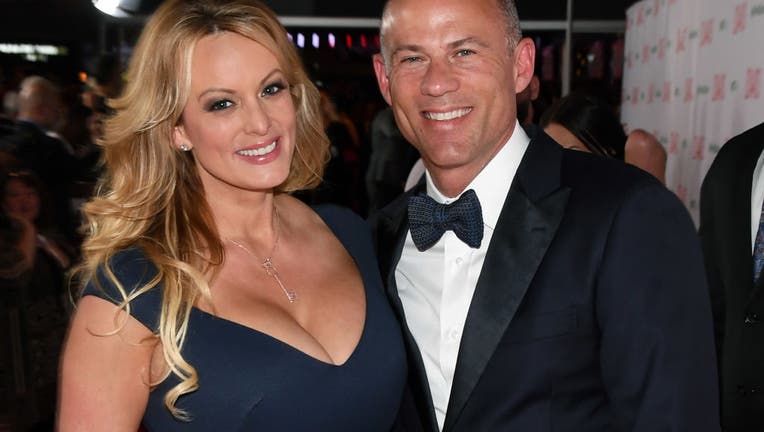 Michael Avenatti was convicted Friday of charges he cheated adult film star Stormy Daniels out of the nearly $300,000 she was supposed to get for writing a book about an alleged tryst with former President Donald Trump.

Avenatti, who acted as his own lawyer, stared straight ahead as the verdict was read. It was another crushing defeat for the California lawyer, who has faced legal problems after briefly rising to fame as one of Trump’s leading antagonists on cable news.

"I’m very disappointed in the jury’s verdict," Avenatti told reporters outside the federal courtroom in New York. "I’m looking forward to a full adjudication of all the issues on appeal."

U.S. District Judge Jesse M. Furman ordered Avenatti to surrender Monday to U.S. marshals in California. Avenatti has delayed serving a 2 1/2-year prison sentence for his 2020 conviction in an extortion case while waiting for the book proceeds trial and the retrial of a fraud case in a California federal court.

Sentencing was set for May 24. Prosecutors said it was likely that Daniels will speak at sentencing.

The verdict came hours after the jury foreperson sent a note to the judge saying one juror was refusing to look at evidence and was deciding the case based on her feelings and emotions.

"She does not believe she needs to prove her side using evidence and refuses to show us how she has come to her conclusion," the note said. "Not going on any evidence, all emotions and does not understand this job of a jury."

But the verdict was unanimous.

It capped an unusual trial in which Avenatti dumped his lawyers and decided to represent himself on the trial’s second day, setting up a face-to-face showdown with Daniels, his former client, who appeared in a new role as star witness.

Avenatti said after the verdict that he did not regret representing himself.

Prosecutors portrayed Avenatti as a common thief and serial liar. He countered by seeking to cast himself as a white knight who came to the rescue of Daniels until she turned on him.

Over two days of cross-examination, he questioned her about the allegations that he’d swindled her out of book proceeds — and about ghost stories she’d told for a possible show about the supernatural world.

In addition to the sentence he has yet to begin serving for trying to extort up to $25 million from sportswear giant Nike, he is awaiting a retrial in Los Angeles on charges that he ripped off clients and others for millions of dollars. He represented himself last year for six weeks before a mistrial resulted.

Daniels had initially hired Avenatti as she was trying to escape the terms of a $130,000 hush payment deal that kept her from speaking publicly about an alleged sexual encounter that Trump says never happened.

Avenatti parlayed his representation with Daniels into a string of cable news appearances in which he mocked and baited Trump.

When Trump’s lawyer, Michael Cohen, was raided by the FBI in connection with tax evasion and payments made to women on Trump’s behalf, Avenatti contributed to the spectacle by bringing Daniels to the federal courthouse.

The relationship between the two fell apart after Daniels said she learned that Avenatti had taken a share of her $800,000 book deal for himself.

Avenatti insisted he was innocent of wire fraud and aggravated identity theft.

After opening statements and two trial witnesses, he shed his lawyers and confronted witnesses himself, setting up his questioning of Daniels, whose legal name is Stephanie Clifford.

Avenatti asked her about things she’d said for a potential program called "Spooky Babes" about living in a haunted house in New Orleans.

Among other things, Daniels had talked about an invisible assailant attacking her partner and communicating with dead people and with a doll who calls her "mommy."

Prosecutors argued Avenatti was trying to portray Daniels as crazy — what they called a "blame-the-victim" defense that failed to support his claim he was owed the money after spending millions of dollars representing Daniels.

Text messages, prosecutors said, showed that Avenatti repeatedly lied to Daniels in 2018 when she pressed him on when she would get a large installment she was owed on the book deal. They said he’d already spent the money on airfare, food and payroll for his debt-ridden law firm.

Podolsky likened Avenatti to a store cashier taking $1,000 out of a register because he believed he’d worked really hard and deserved a bonus.

Avenatti argued at the conclusion of the two-week trial that the government failed to prove its case.

"I’m Italian. I like Italian food. Ladies and gentlemen, the case that the government is trying to feed you has a giant cockroach in the middle of the plate," he told the jury. "Would you eat that dish or would you send it back? I submit that you would send it back."