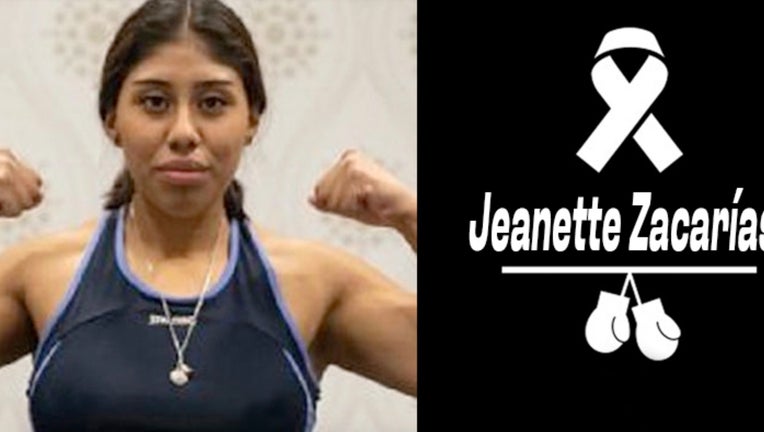 Mexican boxer Jeanette Zacarias Zapata died Thursday after suffering several blows to the head during her match against Canada’s Marie-Pier Houle over the weekend, event officials said. She was just 18.

GYM Gala International Boxing event promoter Groupe Yvon Michel issued a statement Thursday confirming the news of Zapata’s passing, several days after she went unconscious in the ring during her fight against Houle.

"It is with great sadness and torment that we learned, from a representative of her family, that Jeanette Zacarias passed away this afternoon at 3:45 p.m.," the statement read. "We would like to offer our most sincere condolences to her family, loved ones, friends and especially her husband Jovanni Martinez who was at her bedside until her last moments."

According to Yvon Michel, Zapata’s husband declined to comment.

"Jovanni is devastated and extremely upset."

Zapata and Houle were competing at the IGA Stadium in Montreal's Jarry Park on Saturday night. At the end of the fourth round, Houle landed several punches on Zapata, who stood defenseless in the corner.

Video from the fight showed Zapata standing with difficulty after the bell rang as her trainer rushed over. She soon fell unconscious and began to convulse as trainers and medical personnel surrounded her.

According to a report from CBC, Zapata had to pass neurological exams in order to participate in the event after being knocked out in May.

Houle issued her own statement on Facebook, saying she was "devasted" to hear about Zapata’s passing.

"Following the announcement of the terrible news of the death of Jeanette Zacarias Zapata, I am devastated," she wrote, via Yahoo Sports. "I extend my deepest condolences to her family and spouse Jovanni Martinez. Thank you for respecting my desire not to comment more.

"The sad news of the departure of a great athlete like Jeanette Zacarias Zapata leaves me sad and devastated. I offer my sincere and deep condolences to her family and husband Jovanni Martinez. May God enlighten your soul and receive it in His Glory."