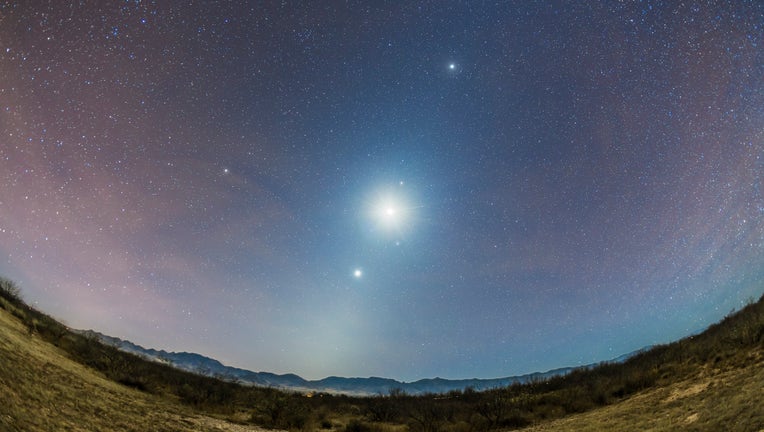 The Zodiacal Light of a late autumn/early winter morning faintly visible amid the moonlight from the waning crescent Moon, at centre here as the brightest object, flaked by three planets: Venus the brightest below, Mars, just above the Moon, and Jupi

If you look up and catch of glimpse of the night sky Tuesday, there’s a chance you’ll catch a celestial treat — Mars, Venus and the moon within close proximity of each other.

According to EarthSky, viewers could have started to see Venus and Mars coming closer together with the young moon beginning July 12. On July 13 around 3 a.m. ET, the two planets came closest when Venus passed 1/2 degree north of Mars.

According to NASA, the two planets appeared to be a finger’s width apart but were millions of miles apart in reality. The two planets will still appear close together Tuesday night, giving skywatchers another chance to view the planetary conjunction about 45 minutes after sundown.

At the same time, the young moon will coincide with the event, putting all three celestial bodies within the same field of view. A young moon — or a waxing crescent moon — occurs between a new moon and the first quarter moon when only a sliver of the lunar landscape is illuminated. The new moon occurred on July 9 and the first quarter moon will occur on July 17, according to timeanddate.com.

Venus exploration has been a recent topic of interest for NASA. The administration recently selected two missions to investigate the planet. DAVINCI+ will measure the composition of Venus’ atmosphere in order to understand how the planet formed and evolved, as well as determine whether the planet ever had an ocean. VERITAS will map Venus’ surface to determine the planet’s geologic history and understand why it developed so differently than Earth.

"We’re revving up our planetary science program with intense exploration of a world that NASA hasn’t visited in over 30 years," NASA’s Thomas Zurbuchen said in a statement. "Using cutting-edge technologies that NASA has developed and refined over many years of missions and technology programs, we’re ushering in a new decade of Venus to understand how an Earth-like planet can become a hothouse."

At the same time, interest continues to grow in space exploration. Sir Richard Branson, the 70-year-old founder of Virgin Group, flew to the edge of space onboard a Virgin Galactic aircraft Sunday morning.

The six-person crew took off in New Mexico shortly after 10:30 a.m. ET. Nearly an hour later, the crew of Unity separated from Mothership Eve and rocketed higher into the sky. The crew experienced several minutes of weightlessness and took in the one-of-a-kind view only space travelers get to enjoy. Unity touched down roughly an hour after its voyage began.

"I have dreamt about this moment since I was a child, but nothing could have prepared me for the view of Earth from space," Branson said.

Jordan Smith contributed to this report. This story was reported from Los Angeles.