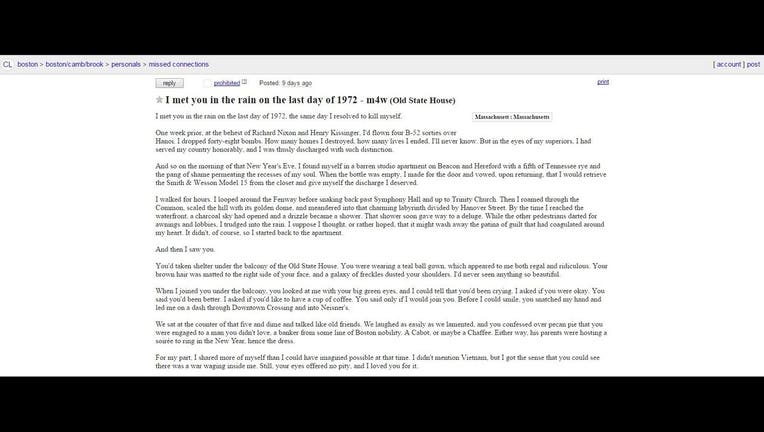 (FOX 11) - A man recently posted in the Craigslist personals section telling a story about a woman he says unknowingly saved his life more than 40 years ago -- and the heartwarming story has gone viral.

Warning: This will give you all the feels.

In an anonymous missed connections ad, the Vietnam War veteran describes how he'd been contemplating suicide.

He served as an Air Force pilot, and having just returned home from Vietnam, was struggling with an overwhelming sense of guilt, he writes.

"I dropped forty-eight bombs. How many homes I destroyed, how many lives I ended, I'll never know," the post reads.

The man went for a walk in the rain, and says that's when he saw this woman who indirectly changed his whole perspective.

"You'd taken shelter under the balcony of the Old State House. You were wearing a teal ball gown, which appeared to me both regal and ridiculous... When I joined you under the balcony, you looked at me with your big green eyes, and I could tell that you'd been crying. I asked if you were okay. You said you'd been better."

He says the pair decided to go for a cup of coffee, where they "talked like old friends" and shared very personal things.

After an hour or so, the man says he excused himself to use the restroom.

"On the way back to the counter, my heart thumped in my chest like an angry judge's gavel, and a future -- our future -- flickered in my mind. But when I reached the stools, you were gone. No phone number. No note. Nothing," he wrote.

The man says he returned to the same diner every day for a year, but never saw the woman. It's been four decades, but he says he's never stopped thinking about their encounter and how it affected him.

"Ironically, the torture of your abandonment seemed to swallow my self-loathing, and the prospect of suicide was suddenly less appealing than the prospect of discovering what had happened in that restaurant," he writes. "The truth is I never really stopped wondering."

Tap here to read the entire post on Craigslist.