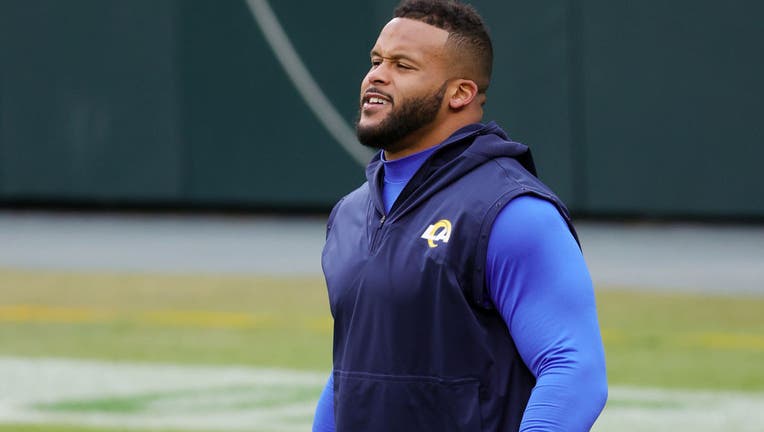 LOS ANGELES - A man who accused Los Angeles Rams defensive tackle Aaron Donald of assaulting him outside a Pittsburgh nightclub has recanted his claim and apologized to Donald.

"I wanted to make this statement public,'' De'Vincent Spriggs said through his attorney Todd Hollis on Friday. "And to extend an apology to Aaron for what he's gone through, but I clearly know this was not him.''

Hollis told CBS' Pittsburgh affiliate KDKA that he reviewed surveillance video that showed Donald was not involved in the assault, and in fact tried to help Spriggs.

Donald's attorney Casey White told ESPN on Friday that Spriggs swung a bottle in Donald's direction outside the establishment. Donald ducked but was still grazed by the bottle, the attorney said.

"As he ducks, somebody from behind grabs him to stop him from interacting from this guy, Mr. Spriggs, so he holds Aaron back in a sense,'' White said. "At that point, that's when other people come to Aaron's aid and defend him by removing, so to speak, Mr. Spriggs from the area where he is punched and he is fighting. It's a mutual fight at this point between other individuals who Aaron does not really know.''

White said Donald eventually runs over to the scrum and "starts pulling people off of (Spriggs),'' but someone eventually grabs Donald and takes him away. According to the attorney, five witnesses have corroborated that Donald was actually trying to help Spriggs by pulling attackers away from him.

Hollis had said earlier that his client was attacked by Donald last weekend at an after-hours club and sustained eye and arm injuries and several cuts to his face.

"It was definitely unprovoked,'' Hollis told KDKA. "I've instructed (Spriggs) not to make any comments, but ... his arm in a sling, his eye is closed, 16 stitches in his eye and a concussion and other severe injuries he's suffered, this is a severe incident.''

Hollis and Spriggs, 26, filed a police report Wednesday and called on authorities to conduct a full investigation of the incident. Pittsburgh police said an investigation was underway, but no one was being identified because no charges have been filed.

Police said no 911 calls were made during the alleged incident and officers responded to a hospital Sunday afternoon to talk with a man who claimed he was assaulted at a bar, but he could not provide an exact location.

The man told police he accidentally bumped into another man at the bar and a confrontation ensued. The man told officers he was punched and kicked by the man he bumped and another man and the alleged victim added he threw a bottle of alcohol, but did not know if he hit anyone, police said.

The Rams released a statement saying the team was "aware of the reports.''

The 29-year-old Donald is a Pittsburgh native who played at the University of Pittsburgh. He was chosen by the Rams with the 13th overall selection in the 2014 draft. Donald was selected as the NFL's Defensive Player of the Year three times, including in 2020.