Magic Johnson celebrates premiere of 'They Call Me Magic' docuseries

Magic Johnson celebrates the premiere of "They Call Me Magic" at a red carpet event in Westwood.

LOS ANGELES - Magic Johnson along with several other icons were in Westwood Thursday night for a premiere featuring his new docuseries, They Call Me Magic.

The docuseries highlights the remarkable accomplishments and global impact of Johnson’s life, both on and off the court. From his humble beginnings in Lansing, Michigan to becoming a five-time NBA champion with the Los Angeles Lakers.

The four-part docuseries also talks about how he changed the conversation around HIV and transcended into a community activist and successful entrepreneur.

RELATED: When Magic Shocked the World: A FOX 11 Limited Series

Magic Johnson spoke in an interview with FOX 11 on the red carpet.

"It's amazing. It really is. You never know what's going to happen when you do something like this. [The series is about] my beautiful wife [Cookie Johnson] and I, our relationship, and my kids. It's about HIV and Aids. It's about struggle. It's about great times, and it's about tough times," he told FOX 11. 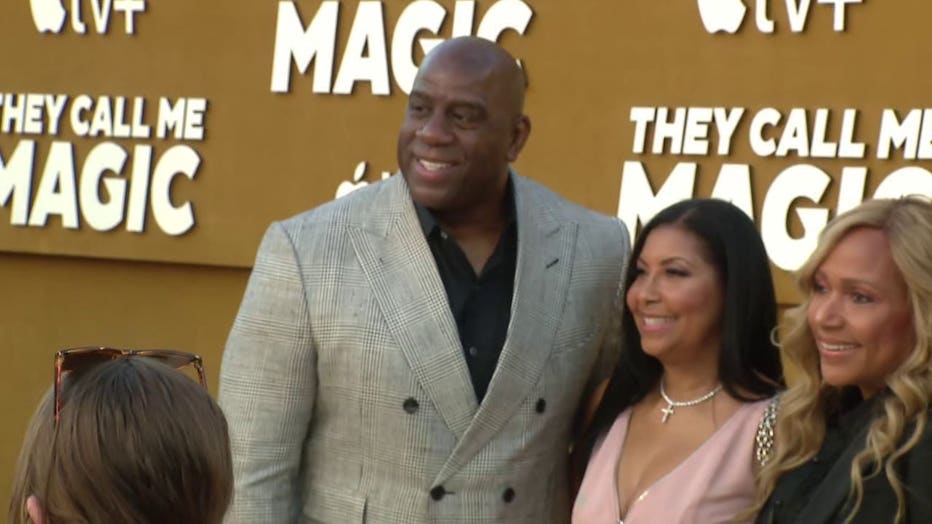 Magic Johnson celebrates the premiere of "They Call Me Magic" at a red carpet event in Westwood. (FOX 11)

Magic said people will learn more about him as a person through the series.

"It's a difference between Magic and Earvin, a huge difference. Magic is crazy. He's all about winning. He's all about doing anything to win and win championships and he loves being a Laker and loves living in Los Angeles, and Earvin is a quiet guy who is a family man, father, grandfather, husband and loves those quiet times with his family," said Magic.

EJ, one of Magic's children, also spoke about the series.

"I really am excited for people to know how he [Magic] transformed himself into a businessman, into a mogul because I don't think a lot of people have really seen that so this is the first time he talks about it in depth so I'm excited for everyone to see that journey that I got to witness growing up with him in the household. He's very much a multi-faceted man. We always said there is a difference between Magic and Earvin and everyone will see both of those sides," said EJ.

"Through all of it, he's always been "dad." We never understood when I was little why people would faint or cry or scream when they would see him. We're like he's just a man, what are you freaking out about but after a while, now it makes sense," said EJ.

Samuel L. Jackson, who is a long-time friend of Magic's, also spoke with FOX 11 about his friend.

"I'm really surprised it has taken this long for somebody to do a documentary about him so that's part of it, and other than that, I am glad that people are recognizing who he is as a person as opposed to a basketball player," said Jackson.

"He is very generous to a fault. He's got one of the best spirits I've ever seen in life. He is so generous with people, no matter where. I watch him every summer take every photograph with every person that asks and I'm hiding behind him. I was so glad when masks started because I could hide behind him and people thought I was his bodyguard," said Jackson.

Stevie Wonder spoke with FOX 11 and said he was looking forward to the series.

"I am excited about his story being told by him, excited about being in this celebration. He has definitely written history that will be carried on through the sands of time then he's another person from Michigan. I believe that Magic has had a life filled with challenges that he's been blessed to overcome, a life of motivation for people less fortunate than him, and the call in his spirit for everyone to know that when you have faith, love and the most high, really nothing is impossible and greatness is not," said Wonder.

"What Magic has meant to me and my husband and our family is he physically shows up. People don't actually show up for anybody these days and he actually shows up every single time for us in literally every area of life," said Union.

Kareem Abdul-Jabbar attended the premiere and also expressed looking forward to the series.

"I think it's going to be great to find out some of the more intimate aspects of his life. I traveled with him for 10 years and I learned a little bit but I'll learn a lot more tonight," said Abdul-Jabbar.

They Call Me Magic will premiere globally April 22 on Apple TV+.