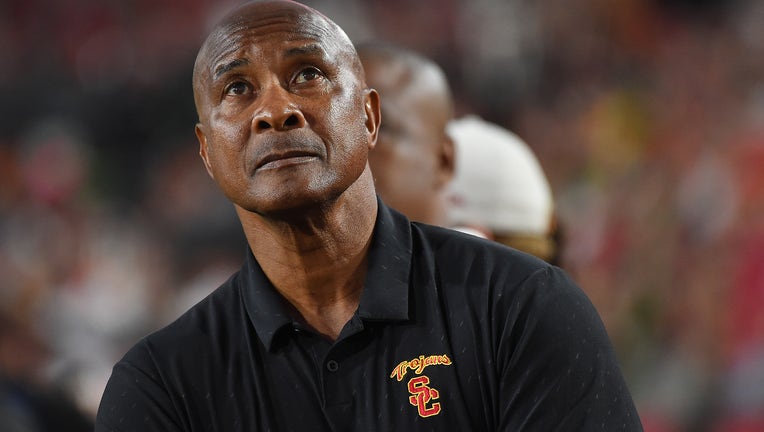 LOS ANGELES, CA - OCTOBER 14: Athletic director Lynn Swann of the USC Trojans stands on the sidelines during the game against the Utah Utes at the Los Angeles Memorial Coliseum on October 14, 2017 in Los Angeles, California. (Photo by Jayne Kamin-Onc (Getty Images)

"Lynn has been a leader on and off the field at USC for nearly five decades, and he will forever be a valued member of the Trojan family,'' USC President Carol Folt wrote an email to the university community announcing the move. No specific reason was given for his departure.

"Lynn has led our Athletics Department to five national championships in five different women's and men's sports during his tenure,'' Folt wrote.

"Our student-athletes' cumulative GPA for the past two years and our graduation rate of 86% last year were all-time highs for USC Athletics. We appreciate Lynn's leadership of the department over these past three years and will continue to be grateful for his historic contributions to USC.''

Dave Roberts, special adviser to Folt and the NCAA's vice chair of the Committee on Infractions, will fill the athletic director post on an interim basis. Folt announced the creation of a committee, headed by USC Trustee Suzanne Nora Johnson, to conduct a national search for a replacement for Swann.

Multiple figures connected to USC's athletics department have been implicated in the nationwide college-admissions cheating scandal, in which well-heeled parents paid hundreds of thousands of dollars in bribes to have their children admitted to elite universities, including USC, often by posing the students as athletic recruits in sports which they often never played.

Former USC women's soccer head coach Ali Khosroshahin has agreed to plead guilty in the case. His assistant, Laura Janke, has already pleaded guilty, with prosecutors saying the pair were paid about $350,000 to designate four students as soccer recruits "despite the fact that none of those children played competitive soccer.''

USC Senior Associate Athletic Director Donna Heinel and water polo head coach Jovan Vavic were also charged in the case, and were fired from their jobs.

Swann, who was hired as USC's athletic director in 2016, had a stellar career as a Trojan wide receiver and was selected in the first round of the 1974 NFL draft. He had a Hall of Fame professional career, winning four Super Bowls with the Pittsburgh Steelers.

There was no immediate comment from Swann. In her email, Folt said the university's athletics department "puts our student-athletes first by pursuing excellence with integrity.''

"We will build on the traditions and strengths of our exceptional athletics program,'' she wrote. Our outstanding coaches, administrators and student-athletes work tirelessly every day both in the classroom and on the playing field, to embody the very best of the Trojan spirit.''