The City of Long Beach held an inauguration ceremony to honor and welcome the city's newest elected leaders, including a few first-time council members and the new mayor Rex Richardson.

LONG BEACH, Calif. - The City of Long Beach held an inauguration ceremony Tuesday to honor and welcome the city's newest elected leaders, including a few first-time council members and the new mayor.

Rex Richardson was sworn in at the Terrace Theater as the 29th mayor of Long Beach, making history as the city's first Black mayor.

"It's not lost on me that I have the opportunity and the responsibility of serving as our city's first Black mayor and Long Beach is a city with a complex history around race," Richardson said. "This is a city that has given me great opportunities. I've been on that stage sworn as a council member and there's nothing like being a mayor of a big city like Long Beach where you have an opportunity to really make a difference in people's lives. It was so special to see my mother. This is big. She came from Reform, Alabama, and we're talking about 1,000 people in the whole town and one stop light."

Richardson was sworn in by his mother, alongside his wife and two young daughters. He will be working with several other newly-elected leaders who also made history Tuesday. 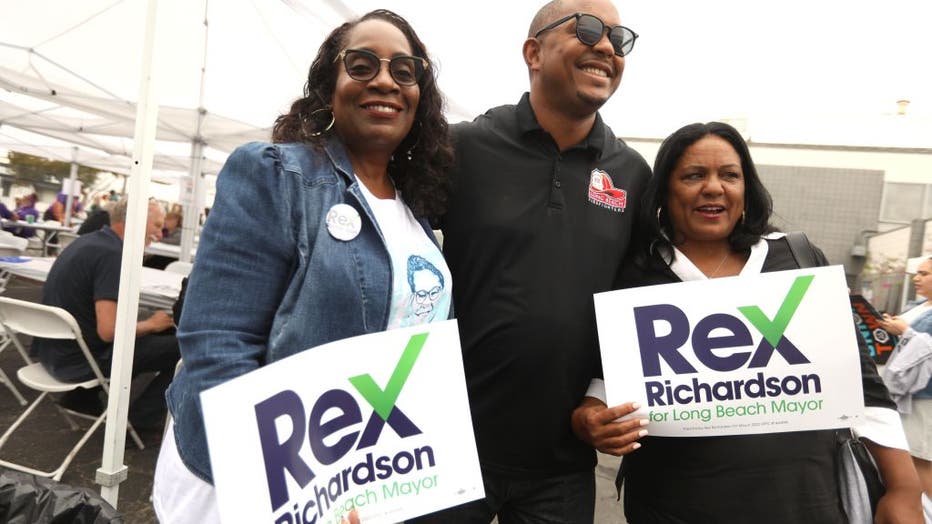 "There's a great sense of alignment in our city. We have a new city council led by six women, more women than we've ever had at any point in our city's history," Richardson said. "We're all aligned and marching in step when it comes to addressing our big challenges. I look forward to working with this city council. I look forward to working with leaders across the region."

"I'm just filled with pride. It was such a beautiful inauguration with all of the community, the members of council. What I'm very excited about is to have Mayor Richardson as a partner and I know he will be a partner. As he said, he views homelessness in the same way we do now in Los Angeles as an emergency and I look forward to working with him," said Bass.

Richardson said he plans to tackle the issue of homelessness on day one.

"Tomorrow [Wednesday], I'll be doing two things. I'll be launching a new comprehensive website in the city that will have data and resources both for the unhoused and individuals concerned about homelessness to figure out what we have available for people. The second thing I'm doing is we're gonna be calling on the city manager to present a declaration of emergency to the city council at the next available meeting so we're beginning by declaring an emergency to increase the urgency around this issue. Ninety-nine people died on our streets just this year," said Richardson.