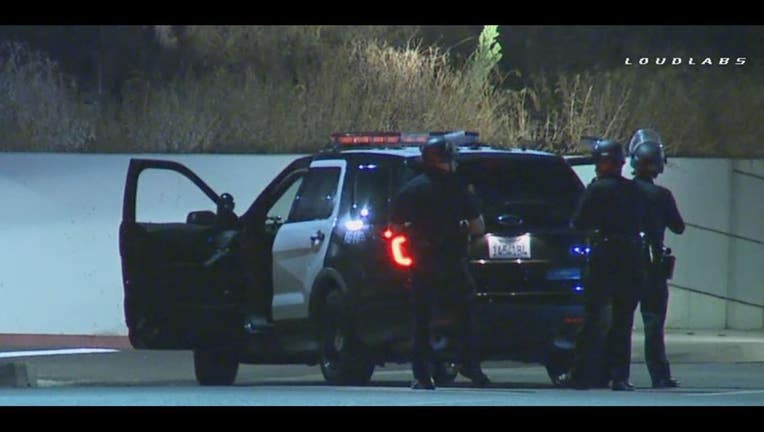 Investigators said the two officers inside the vehicle were responding to a call of shots fired in the area around 4 a.m. when they were the ones shot at.

"When they were in the area they heard some shots and then they heard a thump on their vehicle," Lt. Chris Ramirez, Los Angeles Police Department, said.

That thump was a bullet piercing the right passenger door.

Investigators believe the shots came from somewhere in the vicinity of Eagle Vista Drive and Figueroa, which borders the 134 freeway.

"We put up permitter at which point a thorough and lengthly search occurred to try and find any suspects that may have committed this crime against the officers," Ramirez said.

A portion of the west bound freeway was shut down for at least seven hours as SWAT and other officers searched on foot and in the air.

Neighbor, Dante Banta said, investigators came to his home to look in the backyard and warn of a dangerous suspect.

"Just this morning when police officers were going house to house they said stay inside, lock your doors that's all they said," Banta said.

News of the shooting startled other neighbors too.

Dawn Roznowski came to speak directly to officers to tell them she's been hearing gunshots periodically for weeks.

"I know one time I woke up a couple of weeks ago and I heard 5 shots," Roznowski said. "I don't know if it's connected, but there's stuff going on in the neighborhood that we're concerned about."

Police don't have a suspect description on who fired the shots, but when and if they do catch someone that person will face charges that include, assault with a deadly weapon on police officers.